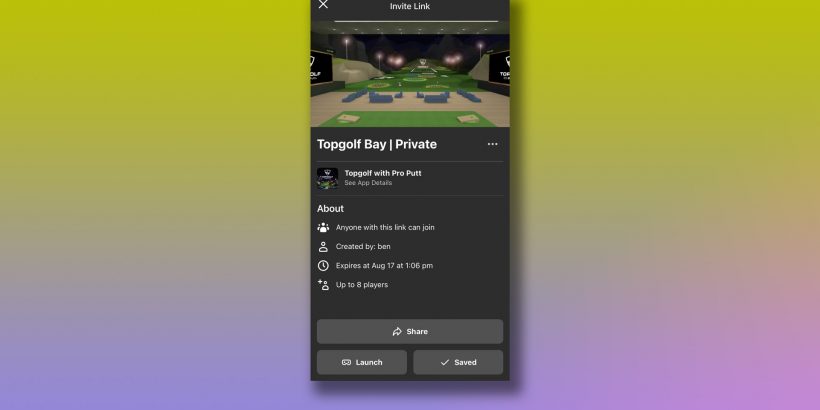 It’s been a long time coming, but Oculus has finally provided a way for players to invite friends to their VR games through a simple web link that can be shared by text, email, DM, or… well, anywhere. This streamlines the action of meeting up with your friends for some virtual fun. For now only some apps support the feature until more developers decide to get on board.

It’s been 14 years since the launch of the original iPhone, and by now we’re all used to  getting messages from friends with a URL that takes us to a funny video, insightful article, or video chat. With such ease of messaging and sharing, the smartphone has become our everyday communication device.

But VR has long been stuck in an annoying space where once you put on the headset you’re cut off from your usual pocket communicator, which can make it frustrating to meet at the same time and place in VR.

Introduced with the v31 update for Quest and Rift, the platform now supports the Invite Link feature which is exactly what it sounds like: you can create a game invitation link that will bring your friend directly into your VR session, and you choose which channel to send it through. This is done via the Oculus smartphone app, meaning you don’t even need to be in the headset yourself to set up the session you want to play.

For instance, if I want to play some cooperative Racket: Nx with a friend, I can start by going to the Oculus smartphone app, creating an Invite Link for a Racket: Nx cooperative session, then text the link to my friend. Whenever they’re ready they can click the link on their phone which will launch the game on their headset and join my session automatically. Invite links are valid for 24 hours, meaning you can send them ahead of time too and wait to get a message back from your friend saying they’re ready to jump in.

The Invite Link works with both Quest and Rift games, though I’m not yet sure if cross-play games are handled correctly (ie: send the same link for a cross-play game to a friend with a Quest and a Rift and they both join the same session regardless of their headset).

The feature is a natural progression of the Destinations, Deep Linking, and Rich Presence features introduced all the way back in 2019 which created the foundation for the Invite Link capability, but stopped short of making it a simple, user-accessible feature.

Invite Link comes as part of the v31 platform update which also smoothes out a handful of other Quest multiplayer flows.

For one, games can now add an ‘Invite to App’ button into the Quest universal menu which makes it easier for players to invite friends to their current game without needing to go through an in-game menu or digging into the Social tab.

There’s also now a ‘Rejoin’ feature which allows apps to give users the opportunity to rejoin a multiplayer session if they get disconnected. Additionally, the ‘App Roster’ shows all users in a session which makes it easy to interact with other players nearby, like sending a friend request.

For now only a handful of games support Invite Link, but developers that want to do so can start by adding Destinations and Group Presence capabilities to their app.