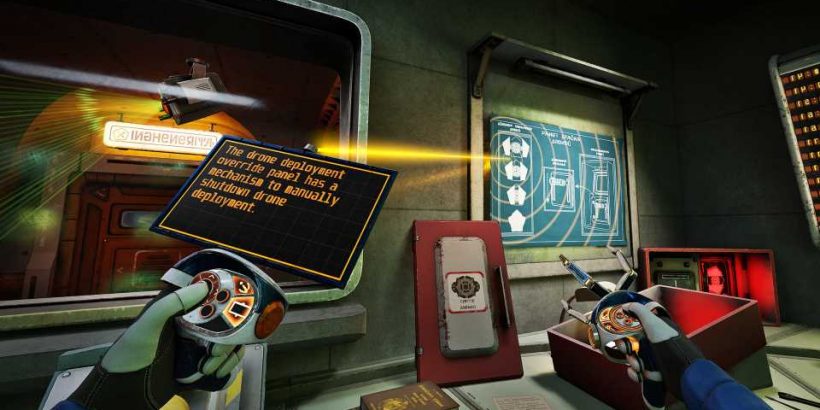 Due out in just two weeks, Red Matter 2 is promising to up the ante over its already well regarded predecessor, this time being built from the ground up to look as good as possible on Quest 2. We got to sample the game to see how it’s shaping up ahead of release.

Developer Vertical Robot has boldly claimed that Red Matter 2 will be the best looking (realistically styled) game on Quest 2, and as we’ve played so far they appear to be well on track to make that a reality. In many ways Red Matter 2 running on Quest 2 looks as good or sometimes better than many smaller PC VR titles, which is no small feat given the performance constraints of the platform.

‘Good graphics’ is a really broad concept; it isn’t just about how high resolution the textures are or how many polygons are on the screen. It’s a synergy of both technical and artistic efforts that make graphics look great.

And Red Matter 2 is really delivering on that. Not only is the game sharp and full of graphical details like reflections and lighting, there’s also a very well executed artistic direction, with some spaces looking so visually distinct and with such great lighting composition that you’d swear the studio hired an architect rather than an game environment artist.

The game has a distinct retro-futuristic vibe, combining ’60s sci-fi sensibilities with brutalist architecture, leading to many impressive looking spaces that would be the perfect villain’s lair from an old international spy thriller. But when it comes to VR, it’s never just about looks. For the world to feel immersive it also needs to be interactive. And this is another place where Red Matter 2 clearly understood the assignment.

Vertical Robot has continued to lean on their ingenious ‘grabber’ tools—which they pioneered in the original Red Matter—as the basis of interaction in the game. Simply put, in the game you hold a multi-tool that looks a lot like the controller that’s in your hands in real life. The tool can toggled between grabbing, scanning, hacking, and a flashlight. It’s surprising to say, but having ‘grabbers’ that look like your controllers feels way more immersive than using virtual ‘hands’ to interact with things in the game.

The reason for the added immersion is twofold: for one, because there’s a tool between you and the object, you don’t expect to feel that kind of haptics that you would if you were grabbing the object with your actual fingers (and thus realism is preserved). And second, since you can’t dexterously manipulate and precisely target virtual objects with your actual fingers, the grabbers much more accurately represent the coarse input limitations of your VR motion controllers. Frankly, it’s amazing many more VR games don’t use this approach.

With your multi-tool in hand, almost everything that looks like you could interact with it can indeed be picked up and played with. And that’s a big plus because, simply put, the core gameplay of Red Matter 2 is indeed interacting.

And if you can’t actually pick something up, there’s a very strong chance you can use your scanner tool to scan it for additional information. And as an aside, Red Matter 2 might have the best paper physics I’ve yet seen in a VR game—little details like that really add up!

To that end the studio has done a great job of creating satisfying interactions that are fun to execute. You’ll press buttons, turn knobs, and pull levers, all in service of solving environmental puzzles that move you through the game and progress the story.

The game isn’t just puzzling… there’s some action in there too, but I can’t talk about that just yet.

From what I’ve played of Red Matter 2 thus far (about a quarter of the game by my estimation), it’s been a very impressive experience that stands out from the rest of the Quest 2’s mostly arcade-y library. It feels a lot like a PC VR game that just happens to be able to run on Quest 2. And for Quest 2 players who wished Lone Echo would have made it to the headset, Red Matter 2 feels like the next best thing given its pace and focus on immersion and interaction.

If I had to give the game a rating from what I’ve played so far, it would be an obvious thumbs up. But the big question is if the gameplay will stay fresh through the entire game or become stale, and whether the story will feel integral to the experience or merely a superficial backdrop for puzzling.

You can find out in our full review when Red Matter 2 launches on Quest 2 and PC VR on August 18th.