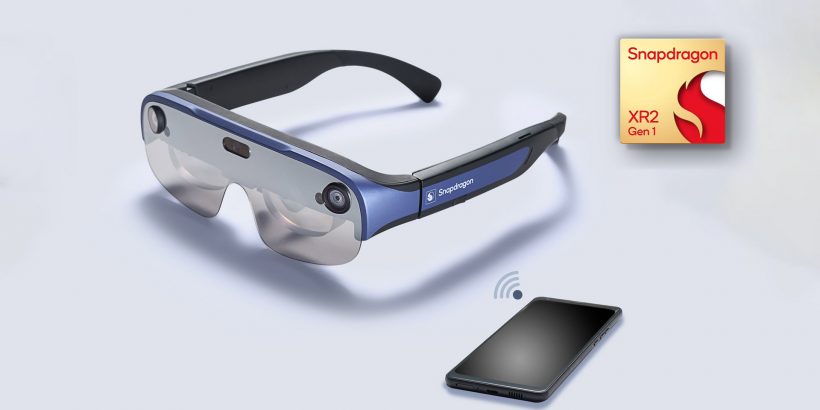 Qualcomm has revealed its latest AR glasses reference design, which it offers up to other companies as a blueprint for building their own AR devices. The reference design, which gives us a strong hint at the specs and capabilities of upcoming products, continues to lean on a smartphone to do the heavy compute, but this time is based on a wireless design.

Qualcomm’s prior AR glasses reference design was based on the Snapdragon XR1 chip and called for a wired connection between a smartphone and the glasses, allowing the system to split rendering tasks between the two devices.

Now the company’s latest design, based on Snapdragon XR2, takes the wire out of the equation. But instead of going fully standalone, the new reference design continues to rely on the smartphone to handle most of the heavy rendering, but now does so over a wireless connection between the devices.

In addition to Snapdragon XR2, the AR glasses include Qualcomm’s FastConnect 6900 chip which equips it with Wi-Fi 6E and Bluetooth 5.3. The company says the chip is designed for “ultra-low latency,” and manages less than 3ms of latency between the headset and the smartphone. The company has also announced XR-specific software for controlling its FastConnect 6900, allowing device makers to tune the wireless traffic between the devices to prioritize the most time-critical data in order to reduce instances of lag or jitter due to wireless interference.

Though a connected smartphone seems like the most obvious use-case, Qualcomm also says the glasses could just as well be paired to a Windows PC or “processing puck.”

Beyond the extra wireless tech, the company says the latest design is 40% thinner than its previous reference design. The latest version has a 1,920 × 1,080 (2MP) per-eye resolution at 90Hz. The microdisplays include a ‘no-motion-blur’ feature—which sounds like a low persistence mode designed to prevent blurring of the image during head movement. A pair of monochrome cameras are used for 6DOF tracking and an RGB camera for video or photo capture. The company didn’t mention the device’s field-of-view, so it’s unlikely to be any larger than the prior reference design at 45° diagonal.

Like its many prior reference designs, Qualcomm isn’t actually going to make and sell the AR glasses. Instead, it offers up the design and underlying technology for other companies to use as a blueprint to build their own devices (hopefully using Qualcomm’s chips!). Companies that build on Qualcomm’s blueprint usually introduce their own industrial design and custom software offering; some even customize the hardware itself, like using different displays or optics.

That makes this AR glasses reference design a pretty good snapshot of the current state of AR glasses that can be mass produced, and a glimpse of what some companies will be offering in the near future.

Qualcomm says its latest AR glasses reference design is “available for select partners,” as of today, and plans to make it more widely available “in the coming months.”