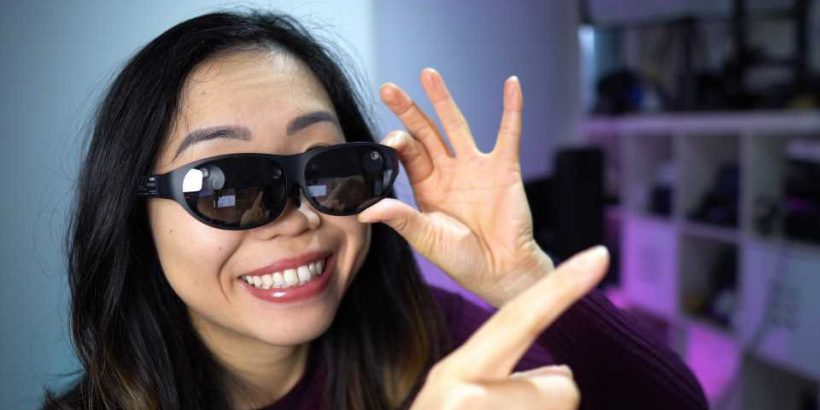 Nreal is a China-based startup behind the Nreal Light AR glasses, which aim for a sunglasses-like design. By hooking it up to your (Android) phone, it’s able to project virtual objects in your real environment and even allow you to walk around with position tracking. While we’re not quite there yet, I think the Nreal Light is definitely getting us closer to fully fledged AR glasses.

Cas and Chary VR is a YouTube channel hosted by Netherland-based duo Casandra Vuong and Chary Keijzer who have been documenting their VR journeys since 2016. They share a curated selection of their content with extra insights for the Road to VR audience.

The Nreal Light glasses launched first in Korea, Japan, Germany, and Spain. Now, they are slowly rolling it out to the rest of the world. Since the beginning of December you can buy a pair in the United States online from their website or from Verizon shop for $600.

I’ve had the chance to try it out for the last few weeks. In this article, I’ll share a summary of my impressions. For my full thoughts, you can watch my video.

Before we dive into my impressions, here are the Nreal Light specs.

As you can see from the specs, the Nreal Light is compact and lightweight. If looking from the front it almost looks like a regular pair of glasses. However, if you look from the sides you can see that it sits higher up on your nose and much further away from the eyes than typical glasses.

To use the device, you need an Android phone that has the app ‘Nebula’ app installed, which is Nreal’s companion app for the glasses. The phone is used to serve you the content by connecting the glasses using the cable that comes out of the left temple. The phone will then become a 3DoF controller. Using a laser pointer that you see on-display and a touchpad that appears on the app, you can navigate Nebula. There are bird-bath optics in the glasses which relay the image of the display hiding in the top of the glasses by reflecting it into your eyes. Using the sensors on the glasses, it’s able to track your head in 6DoF. It also has plane detection and tracking. This means you can spawn a virtual object and have it fixed in one spot so that you can walk around it.

There are two modes available in Nebula. The first mode is called MR Space, which is the place to go for AR games, which are fun. I’ve tried various games, like a tower defense AR game, a turn-based fantasy fighting game, and some meditation apps. It really is able to create a good impression of AR. MR Space can also be used for spawning multiple 2D apps or web pages, up to five screens in total. You can also resize them freely and place them anywhere in your environment. This actually gives a cool Minority Report vibe. I found that this is the mode I used the most. For example, I’d sit on my couch browsing the web while watching a YouTube video. It’s much better for my posture than looking at my phone. The second mode is Air Casting, in this mode you simply duplicate your device’s screen into your field of view. There are two screen modes here: ‘Full screen’ allows you to cover the entire glasses field of view, which is useful when watching TV shows on Netflix, for example. You can also use ‘Side Screen’, which reduces the screen size and places it to the side. This is useful for things like having a webpage open with a recipe while cooking. Since the display is see-through and a bit transparent, you can wear them while doing other things. Surprisingly, the glasses don’t fall off easily, I even tried using an elliptical with it and they managed to stay put.

To use it with both modes, the glasses require a 5G compatible Android phone for it to work fully. So iOS devices won’t work, and the list of compatible Android phones is also quite limited. You can hook it up to any device that supports DisplayPort over USB-C. However, this only allows you to mirror the screen and is not always compatible with MR space mode.

I was impressed by the visual quality of the micro-OLED displays. It has beautiful colors and deep blacks, plus the text is sharp and easy to read. The display’s brightness isn’t always enough, though. If there’s a bright light shining on you or when you’re outside, it’s very hard to see the image. There’s also a lot of visible motion blur if you move your head around. I don’t usually move around a lot with the glasses, but this could be an issue if you want to play fast-paced games.

The field of view isn’t great either at around 52 degrees diagonal. You’ll especially notice this when playing games as you’ll see the image getting cropped. I do want to note that all AR glasses seem to lack FOV, even the expensive ones, so this isn’t an issue that’s specific to Nreal. When watching a movie, this doesn’t matter as much as you can fill the entire FOV with the video. One of my biggest gripes about the Nreal Light is that it drains my phone’s battery very fast. Of course, this depends on your phone. On my Samsung S10, I got about two hours max before my battery drained to 30%. That’s when the Nreal Light turns itself off automatically.

Overall, I’m generally impressed with Nreal Light. While it’s not perfect yet, their software combined with the glasses make for an early AR experience, but one use-cases that already feel useful. But this is definitely in the ‘early adopter’ phase, so you’ll have to be patient for the software to advance. For example, hand tracking is also functional, but there aren’t a lot of apps to use it with so I couldn’t try it yet. In any case, I can’t wait to see what else Nreal and AR in general has in store for us.