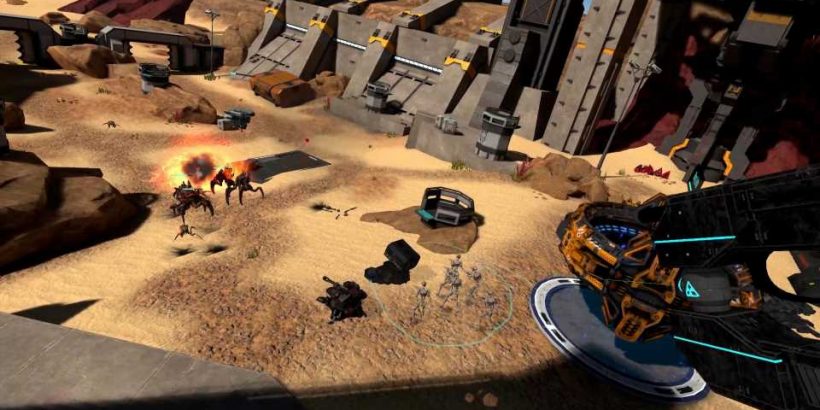 Originally released as Guardians on Meta App Lab, Guardians Frontline is aiming to launch on Meta Quest 2 and SteamVR headsets sometime in early 2023. The newly named title is said to include “updated visuals and new content.”

Blending first-person shooting action with third-person tower defense, Guardians Frontline tasks players with defending against an onslaught of insectoid aliens in an attempt to extract a mysterious energy source.

Featuring both single-player mode and four-player co-op campaign, conquering the battlefield in Guardians Frontline not only requires straight shooting to fend off enemies, but also a quick hand at tactically spawning buildings, mechs, spaceships, heavy weapons, and more. There’s also slated to be PvP deathmatch mode, supporting up to eight players.

Outside of its bespoke battlemaps, Guardians Frontline is also slated to include an in-game level editor tool which you can share with the wider community for free. Basically, expect to at least see Blood Gluch. Founded in Barcelona, Spain in 2017, VirtualAge is also known for popular App Lab game Gladius VR, an ancient Rome-themed combat simulator. This is the first time the studio teams up with VR veterans Fast Travel Games, who are known for critically acclaimed VR titles such as Apex Construct, The Curious Tale of the Stolen Pets, and Wraith: The Oblivion – Afterlife.

There’s no definite launch date yet beyond the stated ‘early 2023’ window, however that curiously lines up with the expected release of PSVR 2. For now, the studio hasn’t said whether its Stellaris VR title is targeting any platform beyond Quest 2, however it may be a safe bet to suppose the veteran VR studio is looking to tap into that fresh PSVR 2 user base.