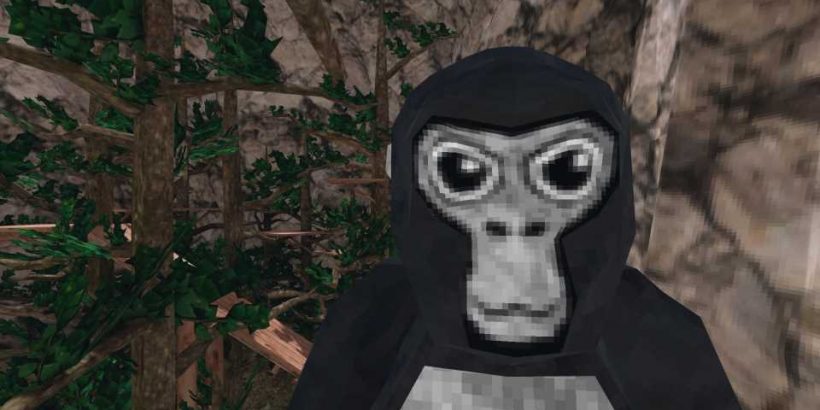 First-time indie VR developer Kerestell Smith was taken aback at the reception of his Early Access multiplayer VR game, Gorilla Tag. The unassuming lo-fi title, which plays like a game of multiplayer tag, has found a synergistic combination of interesting locomotion and social VR, pushing the game to reach an impressive 42,000 players in just two weeks.

Gorilla Tag is as straightforward as it sounds… players take on the role of (legless) gorillas which toss themselves around by smacking their hands on the ground in an effort to chase one another in a game of tag. Interestingly though, you’ll find nearly as many people simply fooling around and chatting with one another as those who are really there to play tag.

Currently available in Early Access on Steam and Quest via SideQuest, Gorilla Tag is a free game, but even so, that doesn’t account for its unexpected success—the title has quickly become the best rated free VR game on Steam with an ‘Overwhelmingly Positive’ 98% rating from 1,854 user reviews, beating out the likes of Google Earth VR, The Lab, and all others. It has seen a similarly positive reception on SideQuest where it currently holds a 4.9 out of 5 rating from 218 reviews.

“[…] the response [to Gorilla Tag] has been completely insane,” developer Kerestell Smith wrote to his community after the game’s first week. “In my wildest dreams I was hoping for a slow burn, so I’d be able to work on stuff at a steady pace and maybe there’d be a room or two of people playing at any given time, but, uh, it turns out lots more people like to ‘be monke’ than I thought they would.”

According to Smith, the game’s sole developer, Gorilla Tag saw 42,000 unique players across all platforms in its first two weeks after release; as of today (three days later) it has reached 54,000 players.

Even for an Early Access title, Gorilla Tag is a bare-bones game right now. Between the pixelated graphics and legless avatars, you’d be forgiven for passing it by. But if you peer inside you’ll find a winning combination of interesting locomotion and social VR magic. Road to VR spoke to Smith about the project and what comes next. Smith is a 31 year old enterprise software developer. While Gorilla Tag is his first game development project, he was previously involved in Echo Arena’s competitive scene and says he was inspired by the game’s take on VR locomotion (which doesn’t rely on typical stick or teleportation movement).

“When you’re doing something like stick locomotion or teleportation, you’re more or less giving orders to a virtual entity. It doesn’t fully feel like you’re present. Like with stick locomotion it feels a lot more like you’re kind of sliding and ice skating around. It doesn’t feel like you’re moving through an environment,” Smith says. “When you have to walk with your hands [as in Gorilla Tag], every movement is dependent on how you’re actually moving [in the real world]. You’re using your arms like you would be using your feet, so it feels a lot more like you’re actually walking around.”

As for the gameplay, Smith notes that the simple game of tag is “a really primal thing,” which makes for easy and compelling multiplayer experience.

For his game he also sought to remove parts of the character that weren’t directly controllable by the player.

“I tried to focus the design as much as possible was on making it feel as grounded as possible,” he says. “You don’t have feet controls in VR, so I took out the legs. You don’t have ring and pinky fingers in most controllers, so I took those out. I didn’t put in any floating menus or UI, everything is grounded in the world.”

The ‘grounded’ metaphor even extends to how players find their way from one game lobby to the next. Instead of a floating multiplayer menu, players climb up a large tree and then descend down a tunnel into a ‘mine’ level. On their way down the tunnel they are seamlessly connected into a new multiplayer session happening in that level. To navigate back to the other level, just climb back up the tunnel and you’ll be connected to a session happening there.

Smith has clearly been taken aback at the game’s traction right out of the gate.

“I didn’t expect this reception at all, I figured I’d have time to work on more of the basics […], but im starting to feel pretty dumb for not having any way for people to give me money at all.”

That said, his short-term plan is to add some paid DLC to Gorilla Tag to give players a way to directly support the game’s ongoing development.

“I’m just working on fleshing out some of the more core features like making it easier for people to play with their friends in public rooms, making a queue for players who want to play a little harder, making more game modes and maps, and working on technical stuff like reducing the networking traffic and adding lag compensation and more server locations,” he said about the near-term goals for the game.

Smith also tells Road to VR that Gorilla Tag is awaiting App Lab approval which will make it much more easily accessible to Quest players (currently the game is only available on Quest via sideload).

Whether Gorilla Tag will be able to translate its early traction into lasting success is anyone’s guess at this point, but there’s clear lessons here in both VR design & distribution that are worth studying.