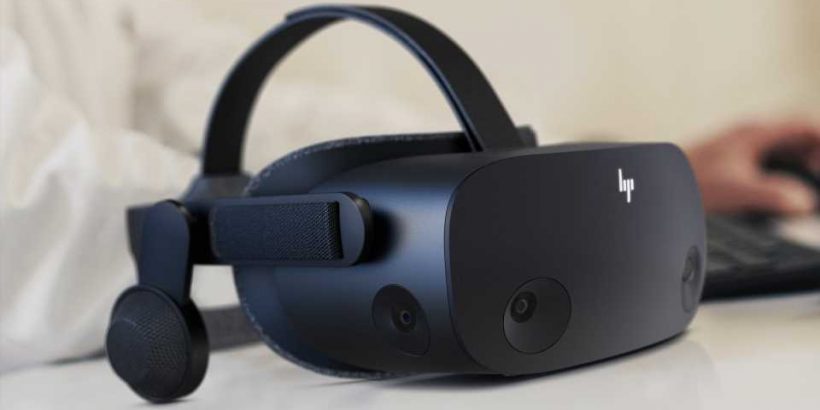 HP recently announced its latest VR headset, Reverb G2. It boasts a substantial number of improvements over the original Reverb and clearly represents the next-gen of WMR headsets. We were fortunate enough to get an exclusive hands-on with the headset; in our first article we detailed G2’s standout feature—its high resolution displays and impressive clarity. This time around we’ll be talking about everything else the headset brings to the table.

While the first wave of Windows VR headsets that launched back in 2017 felt relatively homogenous, HP began blazing its own trail with its original Reverb headset (which I’ll call G1 for short) in 2019, and just a year later the company plans to push yet further with Reverb G2.

For a full breakdown on G2’s features and specs, check out the announcement article; this piece will be focusing on the experiential aspect after our hands-on with the headset, and a bunch of other details we’ve learned from HP—everything except the headset’s visuals, which we covered in Part One. One of the big changes from G1 to G2 that doesn’t fit neatly into a spec sheet is ergonomics.

For one, G2 now has a physical IPD slider where the original had a fixed IPD. An IPD slider allows users to adjust the spacing between the lenses to be optimally aligned with their eyes. Optimal IPD alignment is important for comfort, clarity, and immersion.

HP confirmed that the Reverb G2 IPD adjustment ranges from 60mm to 68mm. As you’d expect with other headsets, when you adjust the slider on the headset, the WMR software on your PC automatically updates the software IPD setting to match.

Another ergonomic improvement from G1 to G2 is a change to the head-mount. While the original—with its circular rear design—was reasonably comfortable, G2 uses an oval shape (very similar to that of Index), which seems likely to fit a wider range of users. The shape is made to find purchase on the back of the head—right on the occipital bone—which actually has a sort of horizontal mound under which the lower part of the oval can be tucked for an ideal fit. I didn’t dislike the comfort of the original Reverb, but feels like an improvement still.

While most of the rest of G2 looks pretty similar in shape to G1, HP actually redesigned all the foam padding on the headset (the parts that cradle the back of your head and face), and it makes a notable difference. G1’s foam was a little more firm and not as wide. G2’s softer and wider foam spreads the pressure on your face over a wider area. Additionally, the face gasket is now magnetic, which makes it a breeze to remove to clear or replace. Given HP’s collaboration with Valve, this feature seems inspired by Index, but unfortunately the face gaskets aren’t interchangeable.

We don’t usually talk about a headset’s tether in relation to ergonomics, but compared to G1, the new cable on G2 makes a difference. The G1 tether was double-barrel—essentially two cables side-by-side. This caused two issues: the first was weight, as the heavy cable could be felt tugging on the back of the headset, and the second was flexibility, as the double-barrel design reinforces the cable against bending in a certain direction.

G2 fixes both issues by moving to a single-barrel cable which is pretty much the same width that you’d expect from Index or any other major VR headset. It’s surprising what a difference it makes just to have less tether weight pulling down on the back of the headset. Quickly, while we’re on the topic of the cable, it’s worth mentioning that G2 has a lengthy 19.5 foot (6m) tether, which is a few feet longer than what you get with Rift S. The extra length is nice just to have more slack for cable management, but there’s an additional unexpected benefit: because WMR headsets have a playspace setup process which uses the headset itself to define the boundary, the extra cable length means you can trace a slightly larger space. That’s nice for anyone who has their PC tucked in the corner, or those with very large playspaces.

Back to ergonomics. I’m not bothered by the available nose-space of most VR headsets. But G1 always felt cramped and would sometimes put pressure on the bride of my nose. Thankfully, G2 has a larger nose-cavity than the original, and it adds some rubber light blockers there to boot.

And even the headphones have ergonomic benefits… HP pretty much grafted Index’s excellent headphones onto G2—using the identical, novel BMR drivers—and I’m definitely happy about that. The move from against-ear headphones to off-ear headphones has a number of advantages.

First is comfort. Having nothing touching your ears is just plain-old better than headphones that push against your ears. What’s more, once you get them into the position you want—as long as you don’t bump them later—you won’t even need to adjust them next time you put on the headset. Against-ear headphones on VR headsets pretty much always get pushed around between uses and need to be adjusted every time.

The second advantage to off-ear is immersion. The unique shape of your ear is actually an important part of how you experience sound. Carefully designed off-ear headphones (like those on Index and G2) expose the sounds to a broader part of your ear, making virtual audio sound more like sound that’s coming from the real world. In my hands-on time with G2, the headphones sounded good but seemed to be lacking some bass compared to Index. When I asked HP about it, they said that the early prototype that I was testing doesn’t have its final EQ, and assured me that—thanks to to the use of the very same drivers and amp—they will be able to perform identically to Index once calibrated. That’s good news, because Index has, hands-down, the best audio solution of any VR headset out there. And if things turn out as HP says, G2 will have it too.