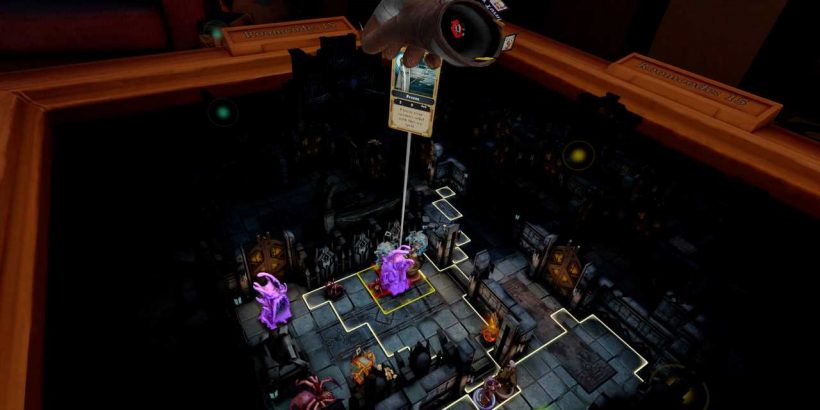 Demeo is a tabletop action RPG that puts you with up to three other players in a co-op battle against pint-sized foes of all makes and models. The basement setting and Monster Manual-esque modules suggest a very in-depth D&D style gameplay experience, but it’s more akin to a more casual turn-based strategy game set in randomized dungeons. It offers a good opportunity to get back into playing board games with friends in a time when it’s not always the smartest idea to do so IRL, but I question whether Demeo has gone far enough to really utilize the full gamut of VR’s immersive possibilities.

Demeo offers both an online mode so you can play with up to three friends or strangers, and single player skirmish mode so you can bone up on your strategy. The idea of the game is to pick one of four heroes, traverse three dungeons and defeat the end boss together. You only have two action points at your disposal for each turn, so you need to choose wisely on whether you move or use an ability card to fight, heal, or hide.

At the time of launch, Demeo only comes with a single game module called ‘The Black Sarcophagus’, but as a roguelite strategy game it offers a randomization of dungeon configuration, ability cards, and both entry and exit locations on the map. More modules are coming too, with Resolution Games saying the next module, dubbed ‘The Rat King’, will arrive sometime in Summer 2021. Demeo is also slated to get regular post-launch updates for free, which will include new environments, enemies, and ability cards.

Anyway, if you’re looking for a quick and dirty how-to on actually playing Demeo, Resolution does a very fair job of explaining all of the basics in the short overview video below.

Foremost, Demeo is a competent tabletop game that hits many of the right beats. Although it only offers one particularly unforgiving difficultly mode, its generally impresses with its fine visual polish, well balanced combat mechanics, and not to mention the ability to bring VR players together in a virtual space for a night of safe and fun entertainment—that last one should not to be underestimated. It also offers hours of gameplay thanks to the randomization of ability cards and dungeon layout, and has just enough depth for anyone to pick up and play. When I say it’s unforgiving, I mean you’ll be bashing at ‘The Black Sarcophagus’ multiple times before you hit the perfect stride of good group communication, understanding all hero abilities, and recognizing the range of enemies crawling around so you know just how to attack and who to gang up on first. To finally break through and defeat the end boss, you’ll also need plenty of luck, patience for restarts, and foresight into which cards make the most sense to save and use. The fastest playthrough I had beating ‘The Black Sarcophagus’ module clocked in just under an hour, which doesn’t account for a few hours of failures beforehand. Both monster and hero abilities feel well balanced, with the edge going to the monsters for their ability to create enemy-spawning nests, making the onslaught near-infinite if you think you can just stay in one place. Conversely, if you jump ahead too quickly, or someone in your party decides to Leroy Jenkins themselves through a door without checking with everyone else, you may end up with more baddies than you can handle. This makes communication key to surviving and moving on the the next dungeon. If you can’t tell by now, I’ll just come out and say it. I like Demeo as a board game. It’s a very well executed game that, with only a few niggles, fits right alongside any other board game you might play with buddies on a Friday night. It feels unburdened from unnecessary fluff, but also isn’t terribly revolutionary either for virtual reality. When it comes to its implementation as a native VR game, it left me wanting more. I really wanted to see more VR-specific mechanics that would set it apart from similar games on a traditional monitor, but I’ll talk more about that in the Immersion section below.

Again, I like Demeo for its clear execution and intention as a tabletop game, I just wished there was more reason for it to be in VR and not on a flatscreen. Consequently it’s also going to be on traditional PC monitors at some point too, which may be the biggest clue as to why it’s designed the way it is. Let me take a step back for a second though. Everything is dripping with style in Demeo, which includes the cool nostalgia-soaked basement for that suitably ’80s feel. If you get down close enough to the action—that can be done by ‘stretching’ the world with both motion controllers—character models and animations can also be really fun to watch too. It certainly evokes a Star Wars-style HoloChess vibe.

Granted, getting that close to inspect enemies and heroes alike is fairly pointless when it comes to actually playing. After settling into the game, you’ll probably end up ignoring most of those rightfully cool things as you toggle the ability to view the world at a 45-degree angle tilt so you don’t strain your neck from constantly looking downward. Avoiding the inevitable neck strain, at that point it basically becomes a game you might well play on traditional monitors, as your motion controller becomes glorified laser pointers to select and move pieces. Hand models just feel too unnatural in how they grip things to make it feel like the obvious first choice—it’s just too damn fiddly to pick up a single piece from a cluster.

That raises the question: what does Demeo bring to VR that a game on traditional monitors can’t? The answer is very little. I was really hoping to see more VR-specific game mechanics, like skill-based interludes, moments for roleplay, or something that would put me more into the game; being able to shrink down to nearly the size of a character doesn’t really cut it. I found that playing Demeo is decidedly less dependent on your ability to see your fellow players, and more on your ability to speak to one another without looking and maybe gesture occasionally. Even then, gesturing is abstracted away in multiplayer mode by emphasizing an air drawing tool which you can use to clearly indicate where you want to go next.

Despite avatar accessories (along with different dice and character themes), it’s clear Demeo is putting much less emphasis on face-to-face player interactions. I just wish there was more reason to have that sort of player-to-player connection in Demeo, like being able to pass them something they might need or want.

Neck comfort is no joke. The human neck isn’t made to carry unbalanced loads for very long, and stress injury is a real thing. At the risk of harming immersion, you can thankfully tilt the table by a variable amount if you want to get even a full front-facing bird’s eye view of the action. I highly recommend this if you’re going to play for more than an hour at a time. That advisory even goes for users with the Quest 2’s Elite Battery Strap offsetting the headset’s weight somewhat.

You can remain seated and play with a natural view of the table, however you’ll probably want to move around quite a bit to get better angles. This is done by grabbing the world with one motion controller, which feels entirely comfortable. Resizing the world by ‘stretching’ it with both hands can feel a little jarring to begin with, but provided you’re not flying around and resizing constantly, you should have an exceedingly comfortable gameplay session.