Sarcos Robotics, a startup developing robots for industrial and defense applications, today nabbed $40 million in equity financing, bringing its total venture capital raised to nearly $100 million. The company plans to use the capital to commercialize its first full-body, self-powered product — the Guardian XO — ahead of an anticipated 2021 ship date.

According to a 2020 Grand View Research report, the exoskeleton market could be worth $4.2 billion by 2027. The firm sees adoption growing steeply in health care, where exoskeletons could address the increased prevalence of spinal cord injuries in industries like security, disaster recovery, infrastructure inspection and maintenance, maritime, oil and gas, and mining. The National SCI Statistical Center reported 17,730 new spinal cord injuries in 2019 in the U.S. alone.

Sarcos spun out from the University of Utah in 1983 and for years operated as a bioengineering research institution. By 2000, the lab had expanded into segments like animated film props, prostheses, and human-computer interfaces. A DARPA grant to develop a military exoskeleton steered Sarcos toward defense applications. After DARPA accepted Sarcos’ proposal in 2006, the company began developing prototypes and contracted with the U.S. Navy to pilot salvage robots. 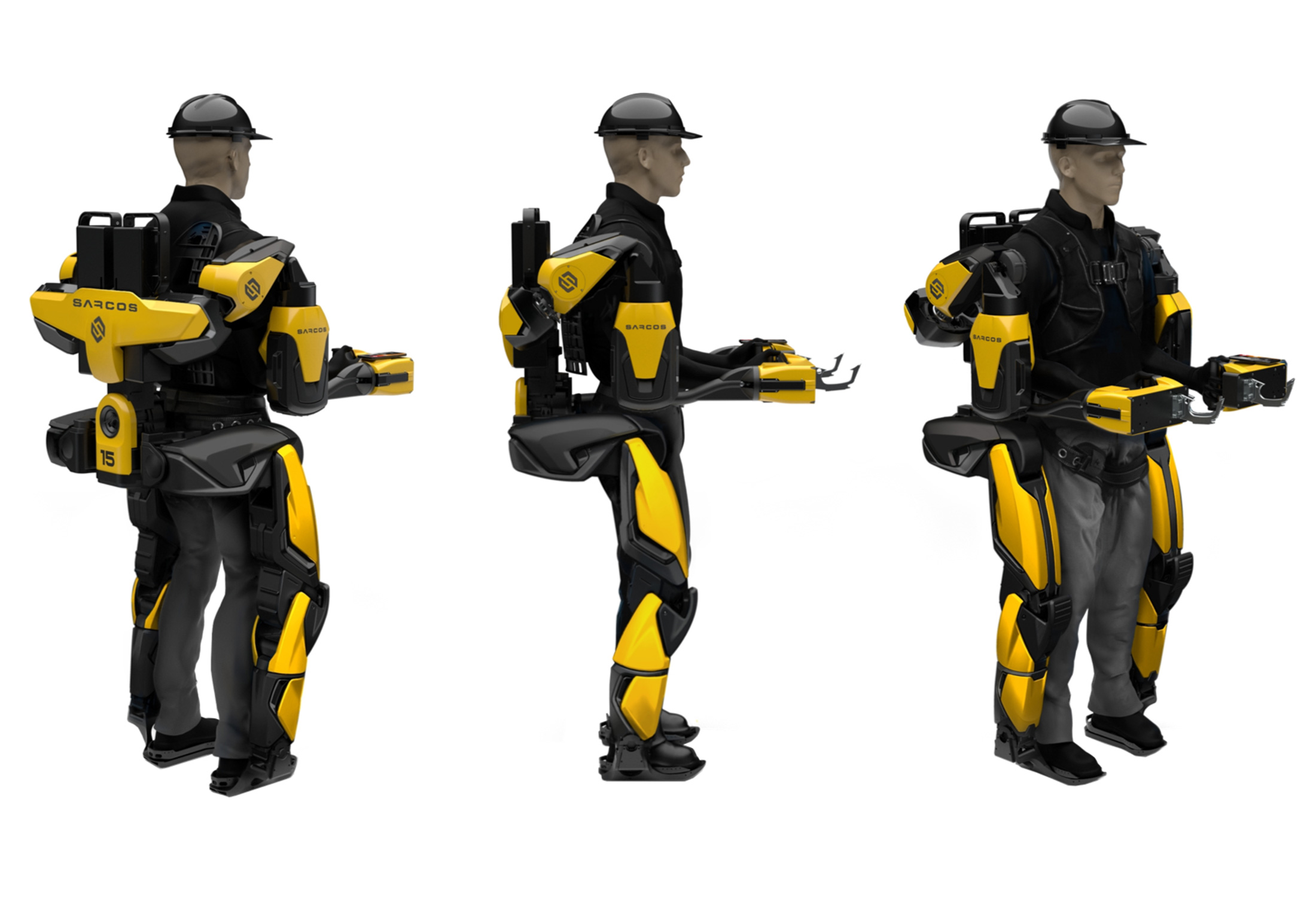 Raytheon bought Sarcos in November 2007 for an undisclosed sum, and from 2007 to 2014 Sarcos operated as Ratheyon’s robotics division focused on technologies for governmental use. The company remained a division of Raytheon until 2015, when Sarcos president and entrepreneur Ben Wolff led a group that acquired the business with venture capital backing.

Sarcos claims past customers include NASA, the Department of Homeland Security; Fortune 100 companies like AT&T, Boeing, Ford, Merck, and Xerox PARC; and universities like MIT and Carnegie Mellon. The company retains a defense division called Sarcos Defense — led by ex-military personnel — that works with the U.S. Department of Defense and other federal, state, local, and international government agencies on research, development, and deployment.

Sarcos claims the battery-powered Guardian XO enables operators to lift up to 200 pounds while compensating for things like gravity and inertia. A docking station handles charging, while custom attachments paired with a control system minimize latency. Making full use of its 24 degrees of freedom, the Guardian XO’s “hands-free” mode allows a wearer to lock the suit’s arms and perform lifting motions. Redundant hardware and software support passive braking to prevent bodily injury, and the exoskeleton’s modular design allows wearers to don it in 30 seconds without having to remove bulky gear.

But Sarcos plans to offer Guardian XO through a subscription-based, multi-year “robot-as-a-service” model that will include maintenance, support, and upgrades. The company says wearers will be able to “augment” the suit through a forthcoming AI platform dubbed Cybernetic Training for Autonomous Robots (CYTAR), which will walk them through specific sets of tasks.

Beyond Guardian XO, Sarcos offers the Guardian S, which is designed for surveillance and inspection. Its snakelike body packs two-way video-, voice-, and data-transmitting hardware capable of carrying up to 10 pounds horizontally and navigating mud, gravel, and water surfaces in confined indoor and outdoor spaces as narrow as seven inches.

The Guardian S, which lasts up to 12 hours on a battery charge (or about 3 miles), can be guided with a remote and is outfitted with sensors that detect infrared light, gas, vibration, location, acceleration, and sound. The IP65-certified, dust-proof robot, which is deployable in less than two minutes, can scale ferromagnetic surfaces while remaining compact and low-profile enough to transport payloads.

The Guardian S’ counterpart — Guardian GT — has two or more seven-foot, seven-degrees-of-freedom dexterous arms mounted on either a track or a wheeled base. Together, they’re able to lift up to 1,000 pounds with task-specific attachments that can reach objects four feet in front, with the robotic arms acting as an extension of the operator’s arm movements.

All of Sarcos’ robots — Guardian XO, Guardian S, and Guardian GT — can be orchestrated from Command Center, a hub that runs atop Microsoft Azure Cloud Services and IoT hub. Command Center offers per-device authentication to set up individual accounts and credentials for all connected machines.

“Sarcos Robotics is uniquely positioned to solve enormous global workforce challenges, such as reducing the economic and social impact of workplace injuries,” said Brian Finn, a partner at Rotor Capital, which led Sarcos’ series C round. “Sarcos is … focused on human augmentation rather than human replacement, delivering the economic and safety benefits of automation to those jobs that can’t be automated because of the complexity of the task or the environment.”

Will the PS5 fit under you TV? Size illustrated in new photos and diagrams