Intel isn’t the only chipmaker aiming to remold the PC industry to its vision. At Computex in Taiwan on Monday, Nvidia revealed RTX Studio laptops, a new initiative focused on giving content creators powerful computer hardware and rock-solid, creation-focused drivers to match.

These powerful notebooks represent the antithesis of Intel’s “Project Athena” ultra-thin ambitions. While all RTX Studio laptops utilize Nvidia’s energy-efficient Max-Q GPU variants to enable slim designs, these things are loaded down with some serious firepower.

They’ll feature RTX graphics cards equipped with dedicated ray tracing and AI hardware, from both the GeForce and Quadro lineups. In fact, Nvidia launched a fresh stack of Quadro mobile GPUs to debut in RTX Studio laptops, culminating in the Quadro RTX 5000, a fearsome beast of a graphics solution with over 3,000 CUDA cores and 16GB of GDDR6 memory. You’ll find a chart of the new RTX Quadro options at the end of this article. 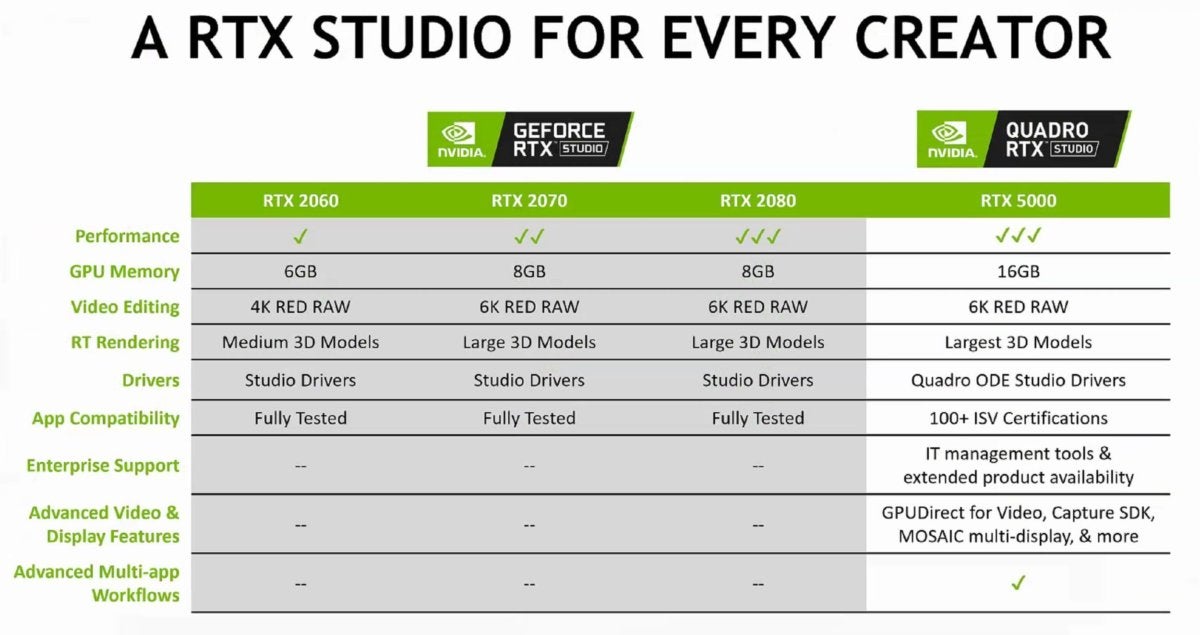 That’s not all. Check out these potent minimum requirements for Nvidia RTX Studio laptops:

That sort of hardware guarantees these laptops can handle anything you throw at them. And Nvidia’s backing up that hardware with dedicated Nvidia Studio Drivers, a reimagining of the Creator Ready drivers the company debuted earlier this year.

Nvidia Studio drivers optimize around performance in creative apps, like the Unity and Unreal game engines, the DaVinci Resolve video editor, Adobe Lightroom, and more. The Studio Driver release cadence revolves around updates to those major creative apps, rather than video games, and Nvidia says it conducts “in-depth multi-app workflow testing across multiple app versions.” Whenever a new Studio Driver version releases, it’ll also wrap in all the available gaming optimizations found in the most current GeForce Game Ready drivers, since so many content creators mix work and play these days. 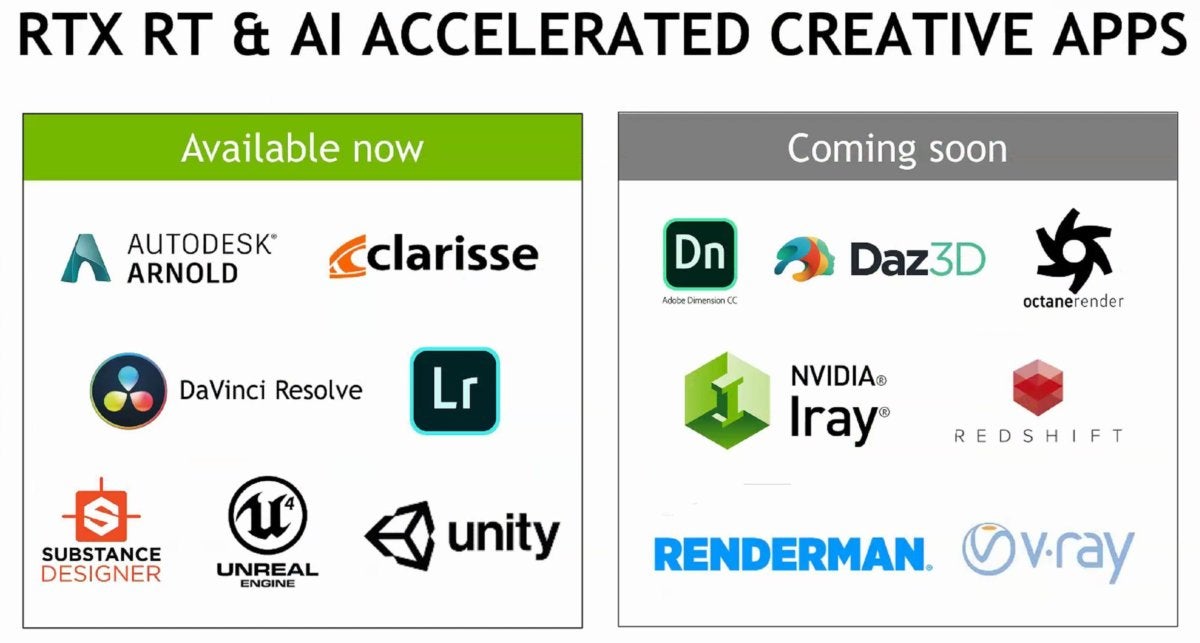 Nvidia claims that RTX Studio laptops running Studio Drivers deliver a major performance advantage over high-end laptops in ray tracing and AI-centric tasks, such as Apple’s Radeon Vega-equipped MacBook Pro. That’s no surprise, given the steep minimum requirements and dedicated hardware for those tasks, though those sorts of tasks are typically reserved for professionals only. But Nvidia also says that RTX Studio laptops can render video significantly faster than the competition, too, as you can see in the charts below, and that should bring a smile to the face of YouTubers and Twitch streamers.

Nvidia’s latest hardware initiative launches with plenty of support, too. The company says that 17 different RTX Studio laptops from seven major PC vendors—Acer, Asus, Dell, Gigabyte, HP, MSI and Razer—will be available when the notebooks launch in June. Nvidia says prices will start at $1,599. Going by the glimpses we’ve received at RTX Studio laptops so far, expect prices to climb much, much higher for the most premium models.

Acer’s ConceptD 7 and the Razer Blade are getting the RTX Studio treatment, and they’re looking luxurious. Each comes equipped with a lofty Quadro RTX 5000 GPU paired with a 4K display. 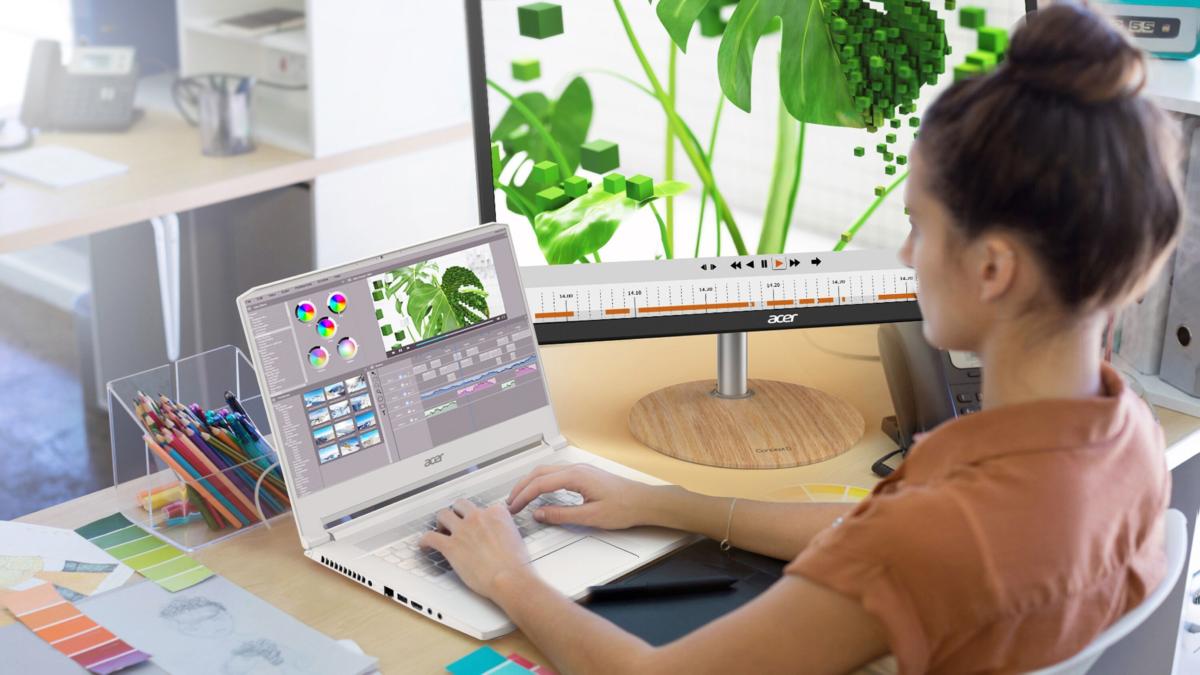 The ConceptD 7 pictured above will ship with a 15.6-inch display built for color accuracy, and it’s svelte for a workstation too, measuring in at 0.7-inches thick and 4.63 lbs. It’s packing a 9th-gen Core i7 chip.

These laptops might all pack a Quadro RTX 5000 with 16GB of memory, but that’s not the only new workstation mobile GPU that Nvidia launched today. Here’s a look at the whole stack: