Great software makes great hardware truly shine, and it seems like Intel graphics chief Raja Koduri knows it. Shortly after Koduri assumed control of the Radeon Technologies Group at his last job at AMD, the company rolled out a long-overdue revamp of its Radeon Settings application. On Wednesday, at GDC 2019, Intel revealed an overhauled Graphics Command Center app ahead of the hotly anticipated 2020 launch of its “Xe” discrete graphics cards.

The company didn’t disclose any additional information about Xe graphics card hardware itself at its GDC event, the kickoff for its new “The Odyssey” community-building initiative. But Intel provided PCWorld with an early build of its modernized Graphics Command Center app, and it shows that the team is serious about laying the groundwork for a bigger graphics push.

The Intel Graphics Command Center isn’t all about the future, though. Over 1 billion users already have Intel’s HD integrated graphics in their computers, and those gamers can start taking advantage of the new app right away. The Early Access version we tried is expected to be available immediately in Windows 10’s Microsoft store—but note that you’ll need a 6th-gen (2015) or newer Intel processor to use it.

Rather than waxing poetic about every minute detail of the new app, we’ll simply show you what it looks like. To start, let’s take a moment to appreciate just how much of an upgrade this is. The current Intel Graphics Control Panel functions well enough, but it definitely feels dated: 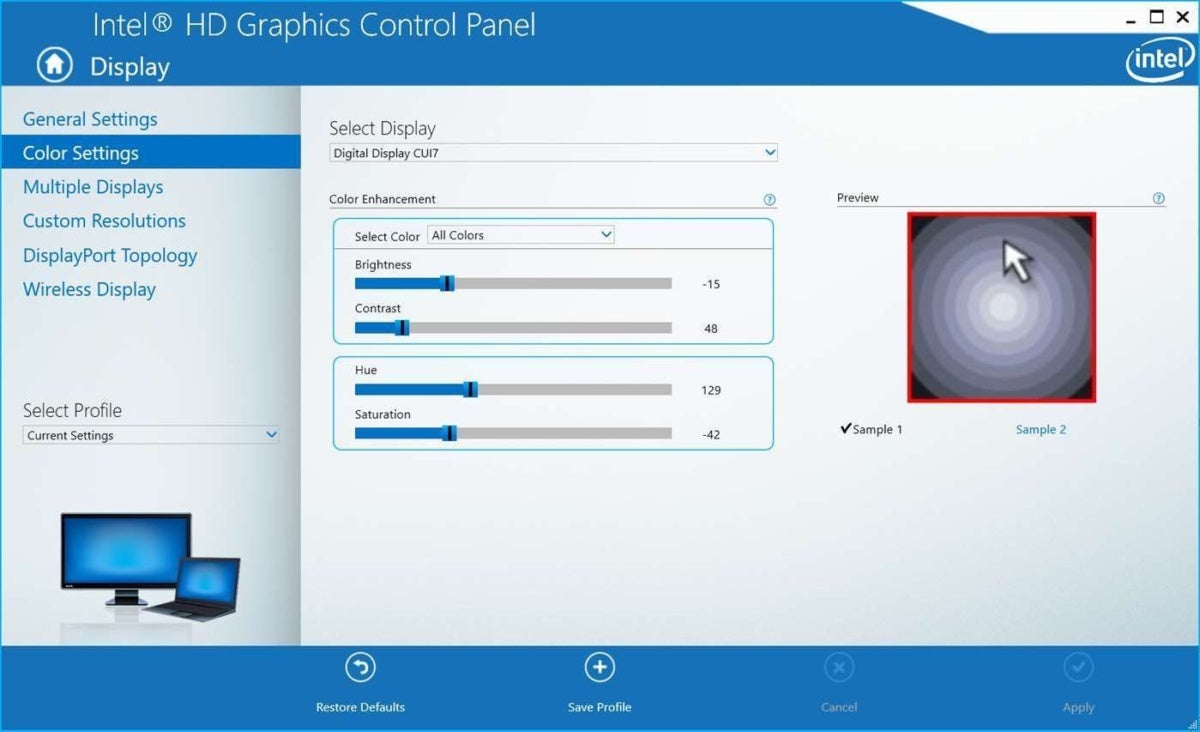 Now feast your eyes on every inch of the overhauled Intel Graphics Command Center. These images were all taken by my colleague Mark Hachman, and you can click any picture to enlarge it: 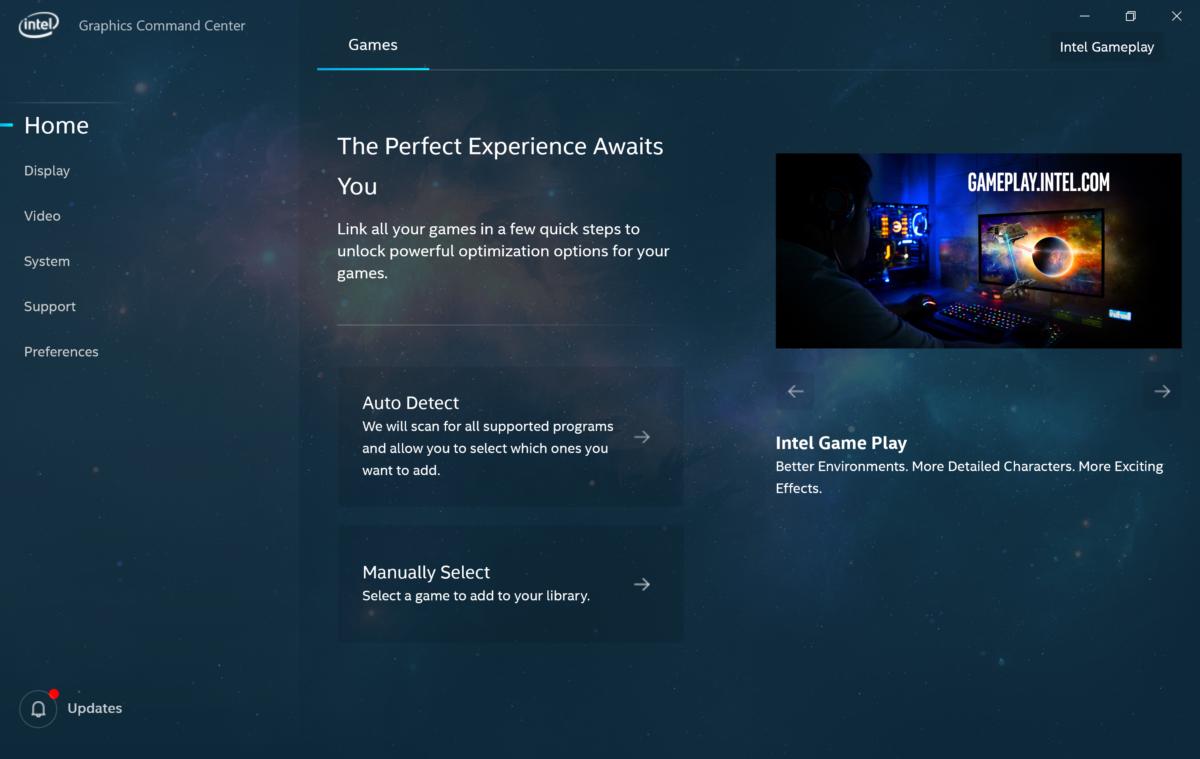 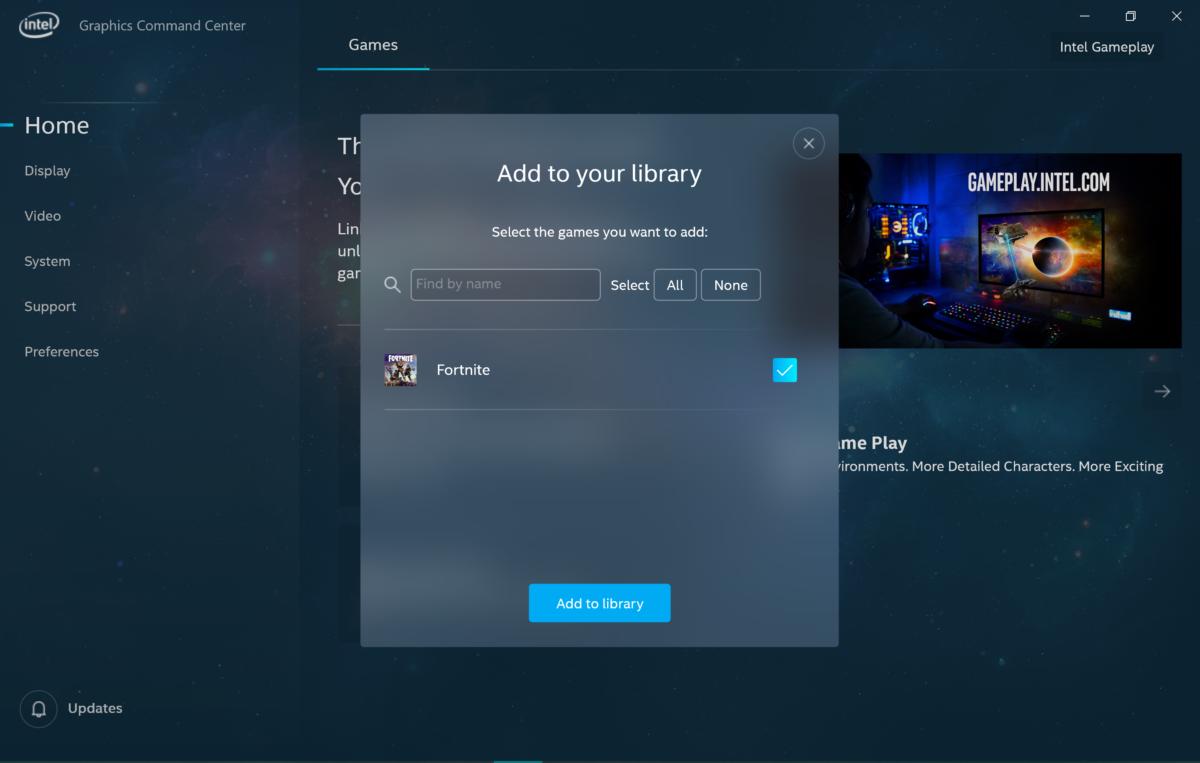 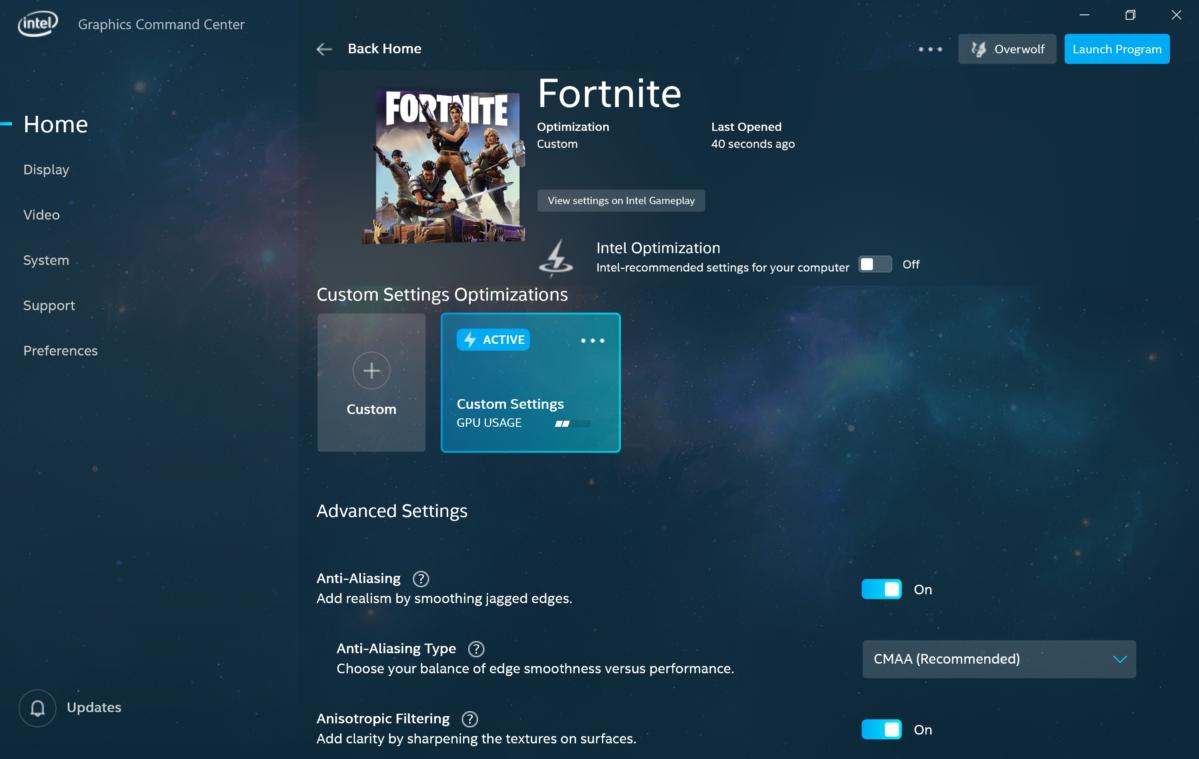 Intel’s graphics app can optimize your games to best fit your hardware’s capabilities. A nice touch: If you hover over the question-mark tooltip next to the graphics options listed in the Advanced Settings for a game, the app explains what that option actually means, using illustrated examples of the feature when it’s on and off. Nvidia’s rival GeForce Experience offers similar guidance, and it’s a great help for gamers who aren’t graphics geeks.

Unfortunately, only 30 games currently support the Intel app’s optimization feature, though the company says that more will be added “constantly.” Intel’s gameplay site lists graphics optimizations for a vast swath of games that could probably be added to the app in fairly short order.

Let’s continue with the display and video portions of the app, the other sections most likely to interest gamers: 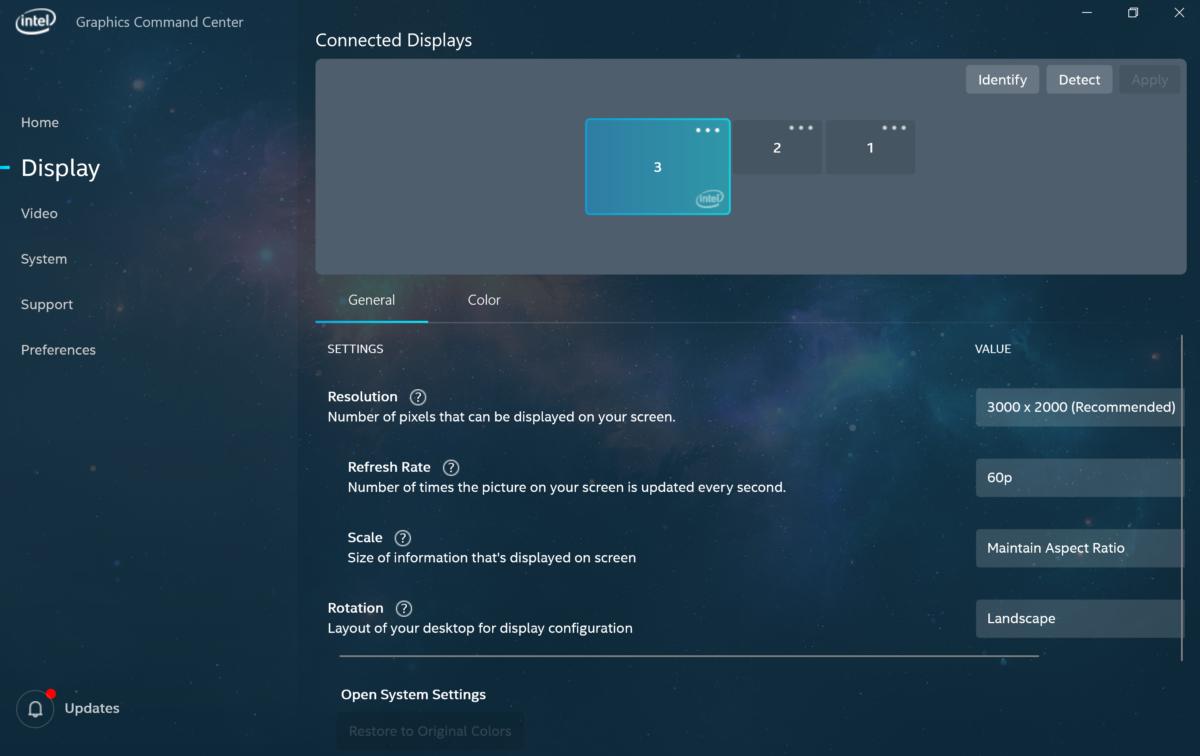 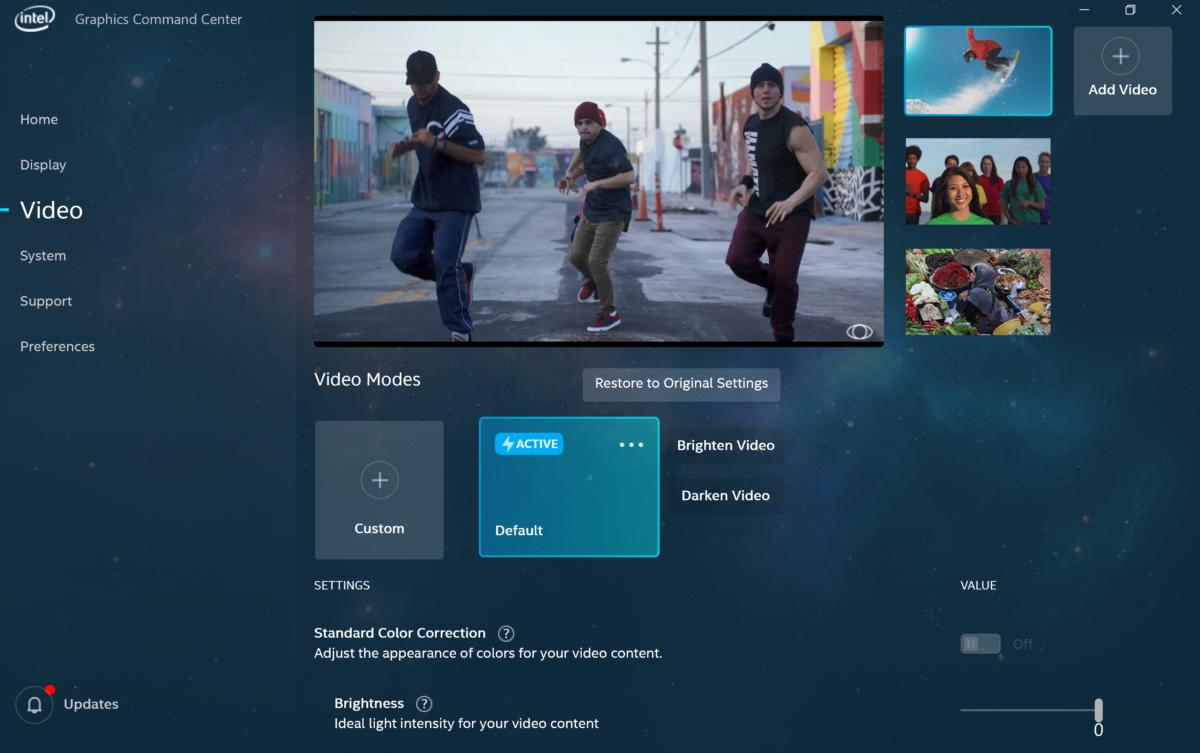 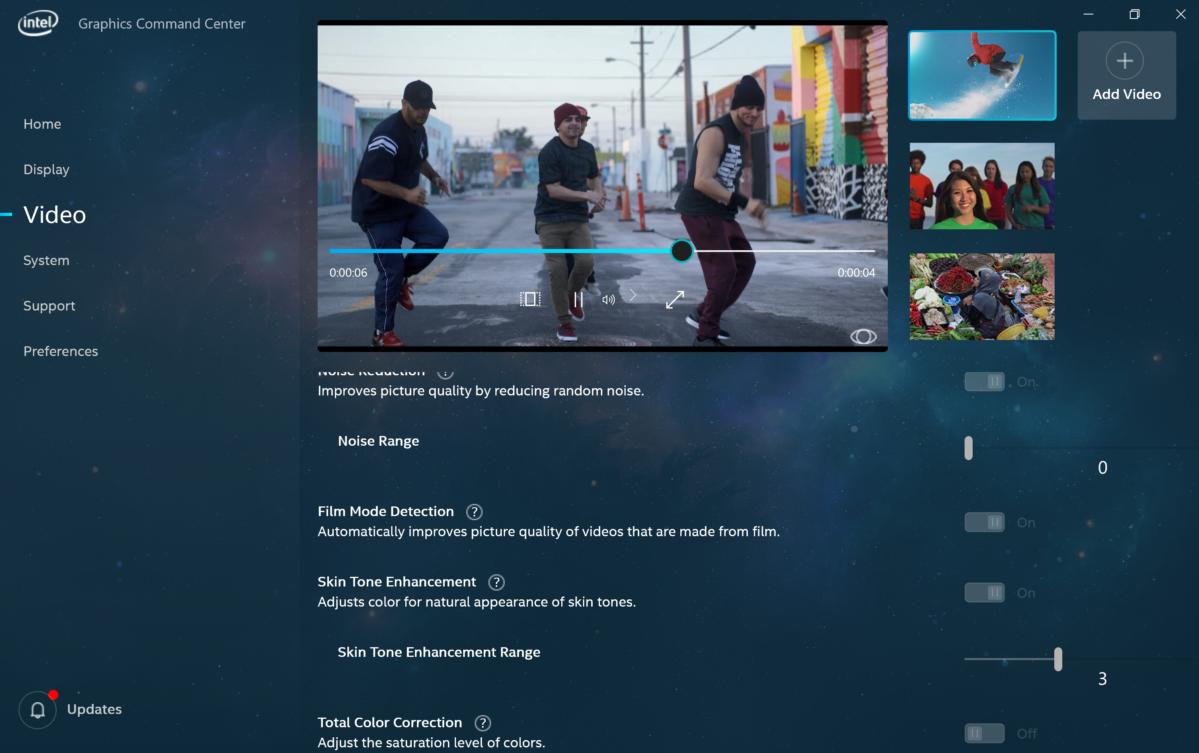 The Intel Graphics Command Center also includes sections devoted to your system configuration, support, and preferences for the app itself. Pro tip: You probably want to disable promotions. 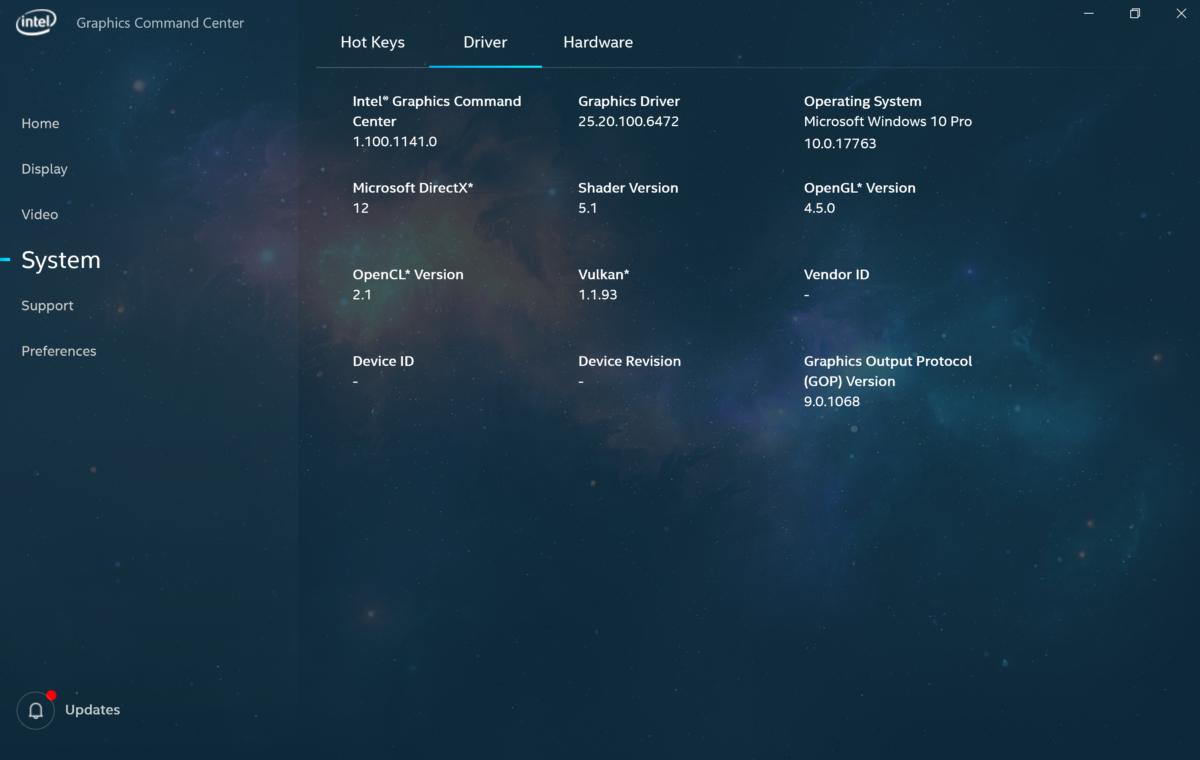 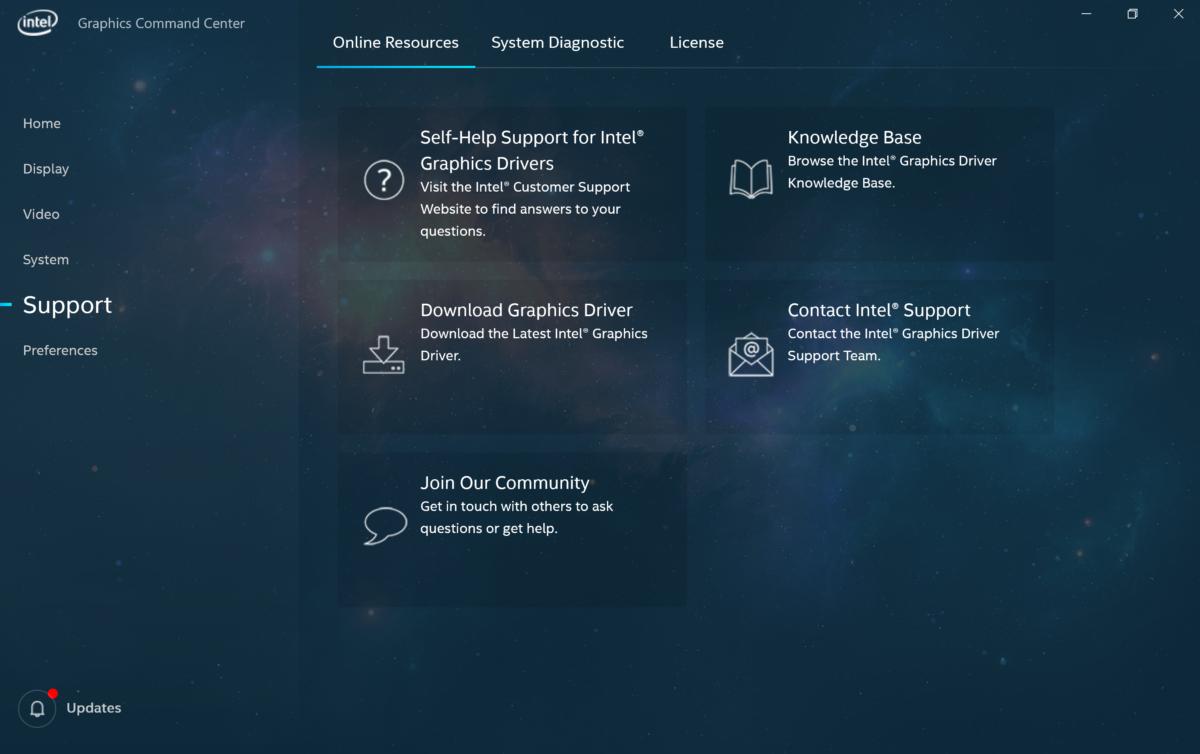 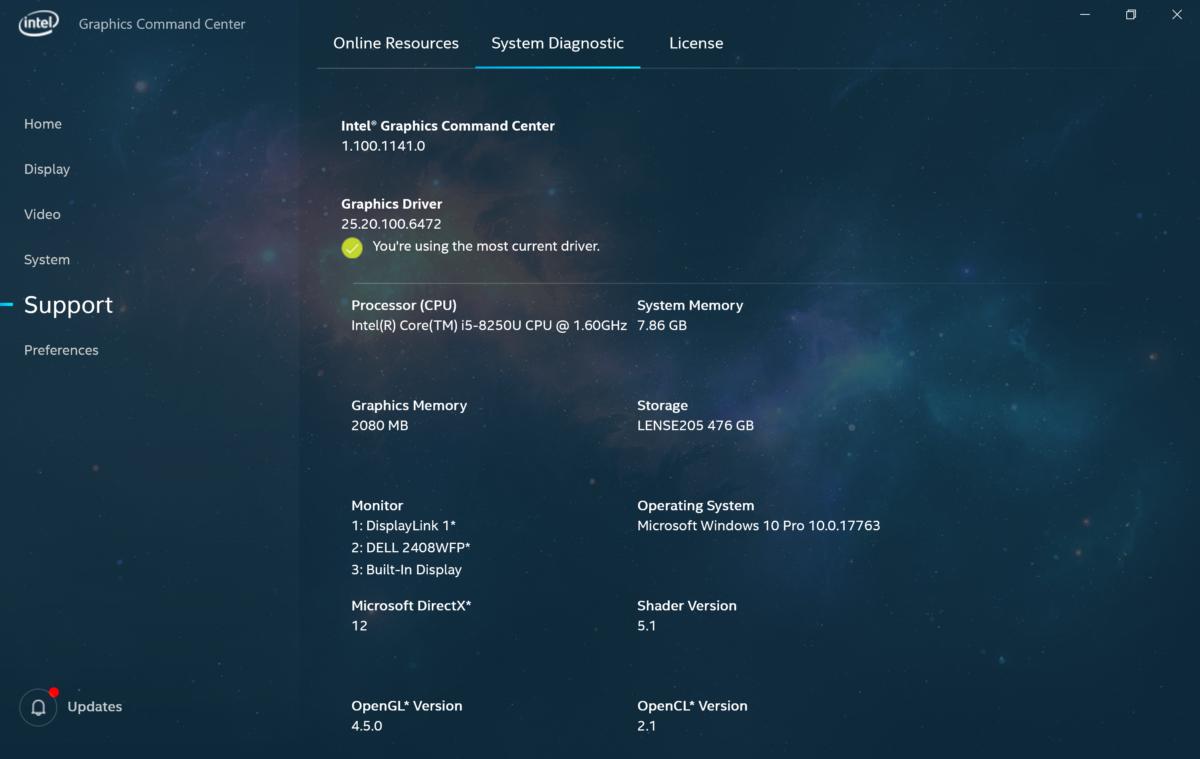 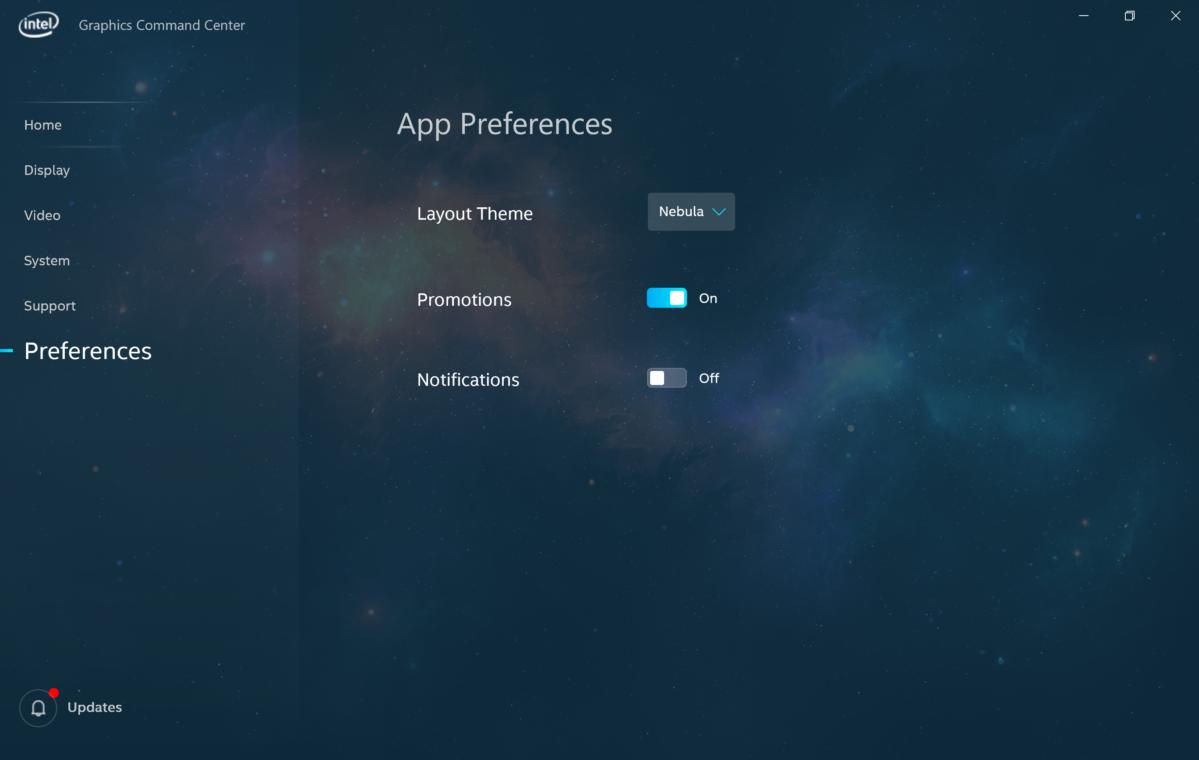 Those newfangled Xe GPUs aren’t even close to launching yet, and this is just the beginning of Intel’s odyssey with the Graphics Command Center.

While it sure is pretty, the app can’t yet match the robust functionality of established software by AMD and Nvidia, which offer extras like video capture tools, performance monitoring, and per-app overclocking. Those sorts of tools seem better suited for powerful discrete graphics, though, so they could be added closer to Xe’s release in 2020. And while offering auto-optimization options is a huge bonus for gamers playing on integrated graphics, supporting a mere 30 games won’t cut it for long, especially in the face of GeForce Experience’s deep library.  Here’s hoping those promised additions start flying fast, furiously, and soon.

Intel’s pledged to keep improving the app. The future will bring community-created skins to the Graphics Command Center, joining the “Nebula” skin shown above. The company plans to host dedicated community support threads and a Reddit AMA on April 25 for feedback from early adopters. “Expect new features and continued improvements over time,” the final slide of Intel’s press deck declared.

Is there still room for improvement? Sure. But you get only one chance to make a first impression. The modernized Graphics Command Center is starting Intel’s graphics odyssey off on the right foot.