Amid a growing crowd of super-thin, super-light and super-fast gaming laptops, HP’s Omen X 2S 15 just jumped above the noise.

Sure this sub-five-pound laptop features an 8-core, 9th-gen Core i9-9880H CPU and a GeForce RTX 2080 Max-Q GPU—those specs are a given on any high-end laptop. But all those other laptops don’t have a six-inch touchscreen in the keyboard deck. The Omen X 2S 15 does. 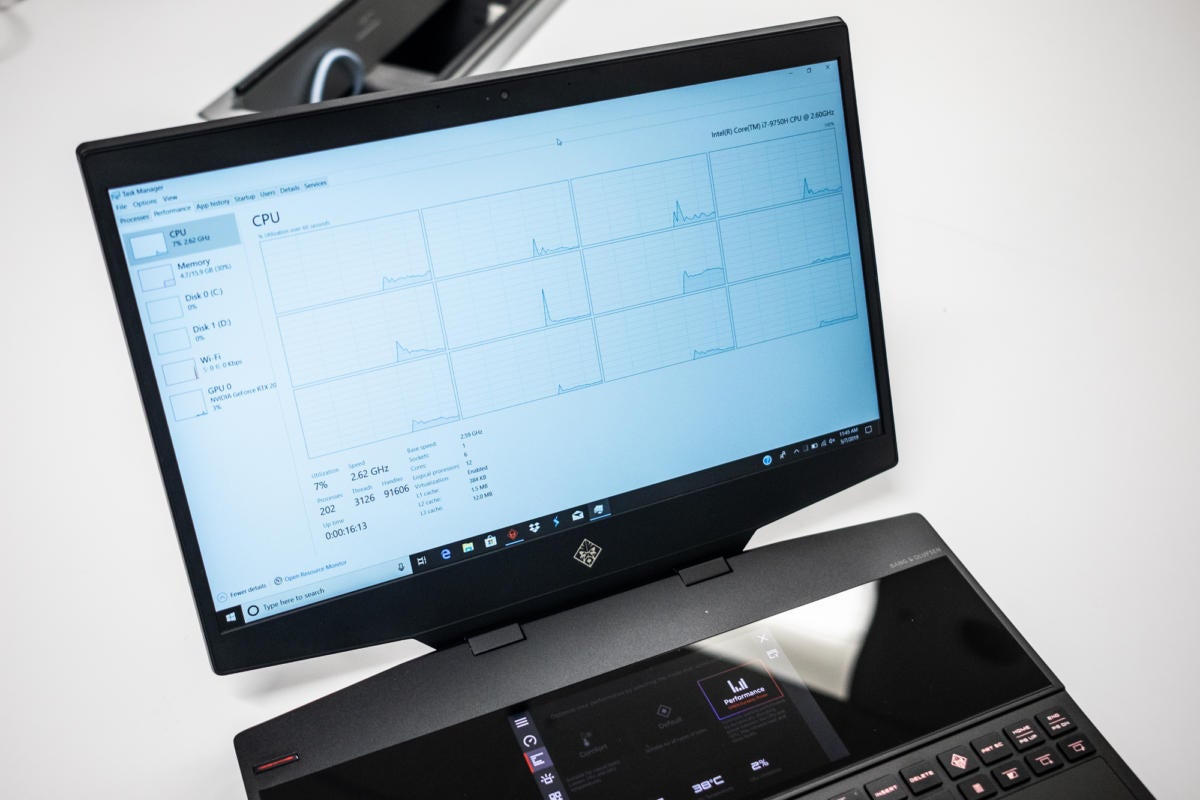 Dual-screen laptops aren’t new, but they’re rare. Lenovo tried it way back in 2009 with its beefy W700ds, with a screen that slid out from behind the main screen. Asus did it recently with the ZenBook Pro, which integrated a screen into the trackpad. Add in any number of dual-screen attempts along the way, such as Acer’s 2011-era Iconia 6120, and it’s a pretty old concept.

None of those are gaming laptops, though, which lets HP claim the mantle of being the “World’s first dual screen gaming laptop.” (You can exclude 2014’s Razer Blade Pro because the second screen wasn’t an extension of the desktop display, technically. And no, Razer’s three-screen Project Valerie was never sold.) 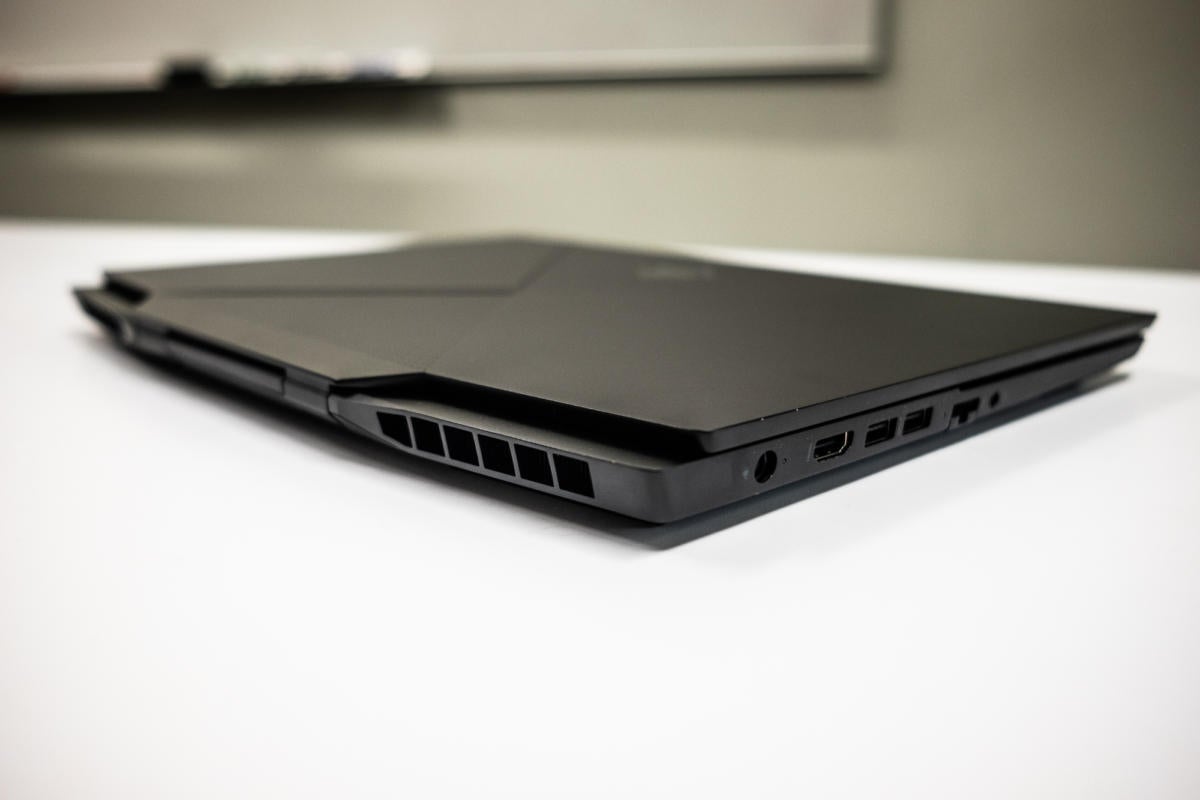 With the Omen X 2S 15, HP hopes to make its concept actually usable with some pretty cool software tricks. The six-inch secondary screen is essentially a 1920×1080-resolution LCD that Windows sees as a second display. You can push a button and have the active window moved from the main display (a 1920×1080 240Hz G-Sync panel) to the secondary display. This will let you watch your favorite YouTube show or monitor Slickdeals.com for breaking PC deals. You can also monitor the laptop’s vital statistics, such as CPU or GPU temperature.

Why the dual-screen matters

Those aren’t exactly hot gamer tasks, though. HP takes its dual-screen approach further with a nifty feature called screen mirroring that lets you zoom in on a portion of a game and show it on the second display. This is critical to the success of the Omen X 2S, because very few games today are designed with dual monitors in mind. HP gets around it by basically making it work in any game.

HP’s nifty utility lets you, for example, take a map from Counter Strike: Global Operations, or the mini map from World of Warships or a track map from any racing game you play, and display it on the six-inch screen.

In some games, it might not help due to the diminutive size of the mini-display, but you could, for instance, magnify a portion of the map for greater navigational precision. You could even “enhance” your game play by zooming in on the reticle area of the main screen to create an immediate, always-magnified view. Yes, 360 no-scope shots galore.

To jam the screen in there, HP moves the per-key RGB keyboard to the front of the laptop and the trackpad to the side. It’s an idea we’ve seen recently with the Asus ROG Zephyrus GX501, but old timers will remember that early laptops were commonly built with forward keyboards. 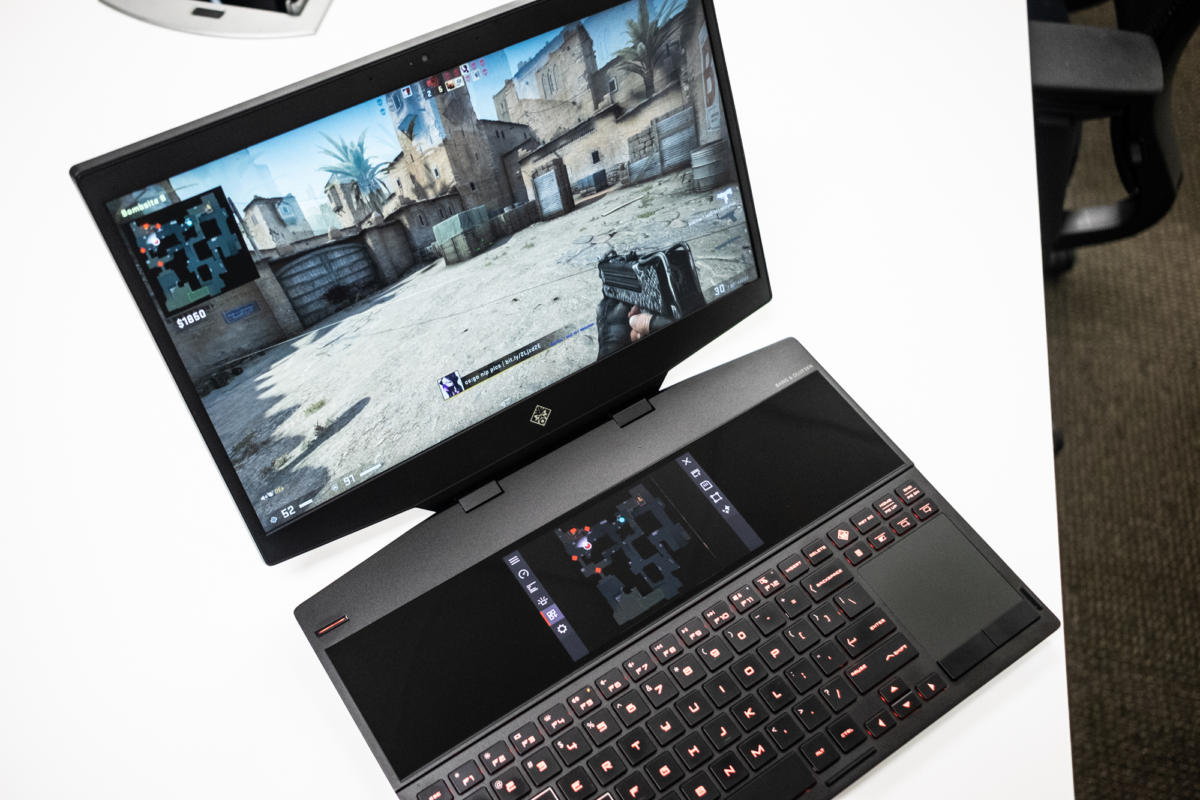 HP’s new Omen X 2S lets you zoom in to any portion of the display, such as the minimap, or the reticle to create “360 no-scope” situations.

One issue modern gaming laptops face is the “throttling” of performance when a component heats up. By ‘modern’ we don’t mean the big, thick, eight-pound laptops, but rather relatively lighter five-pound models that try to jam an 8-core CPU and a top-end GPU into their slimmer shells.

HP addressed the issues in several ways. First, it built large vents—mesh panels with metal solid metal framework—into the bottom of the laptop. The fans are three-phase,  12-volt fans so they can move a lot of air over the four heat pipes, the company said. The laptop exhausts out the back and the side.

To further aid in cooling, HP said it will use Thermal Grizzly Conductonaut liquid metal thermal compound from the factory on the CPU. While smaller boutique PC vendors have offered it as an option on laptops for additional cash, HP’s making it a standard feature on all Omen X 2S 15 laptops.

Liquid metal has been kicking around on the PC for more than a decade, but the compound’s conductivity (which can be bad in a computer) has scared some off. HP said its application in a highly mobile laptop doesn’t carry the same risk as using it in a desktop. 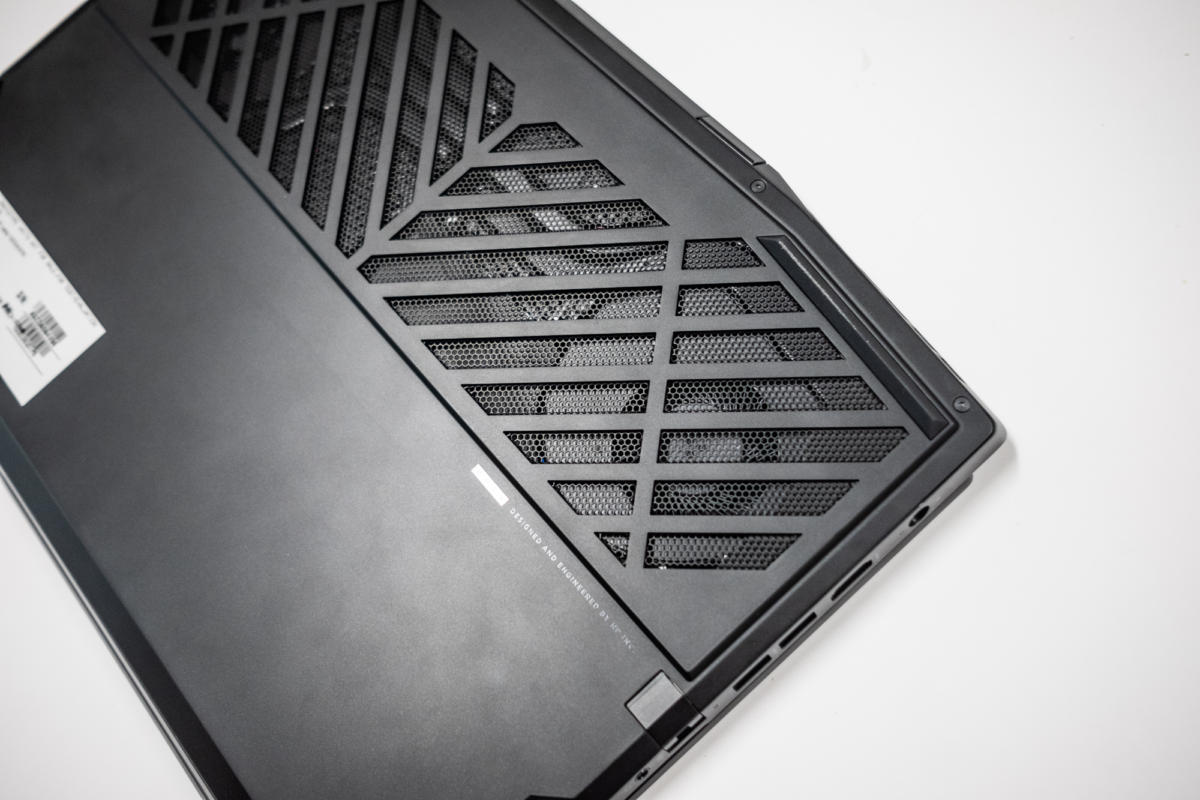 You can see that half of the bottom of the Omen X 2S 15 is one big intake.

The performance difference compared to the paste, grease or bubble gum that most laptop makers use is considerable, HP claims. HP also says its own testing shows a 28-percent frame rate boost in Apex Legends performance from using liquid metal.

Taming the cooling of the 8-core 9th gen Core i9-9880H will be key to higher clock speeds in gaming situations that aren’t limited by the GPU’s performance (something you’ll be hard-pressed to do on a 1080p screen). It should help in other ways as well. HP said its own tests show that going from common thermal grease to liquid metal in the same laptop improved rendering in Blender about 8.5 percent, too.

We look forward to testing these claims if we get a review unit. If they prove out, it’ll be big step forward for laptop cooling.

We should note that the liquid metal is only used on the CPU and not the GPU. HP said it targeted the component with the densest heat production. 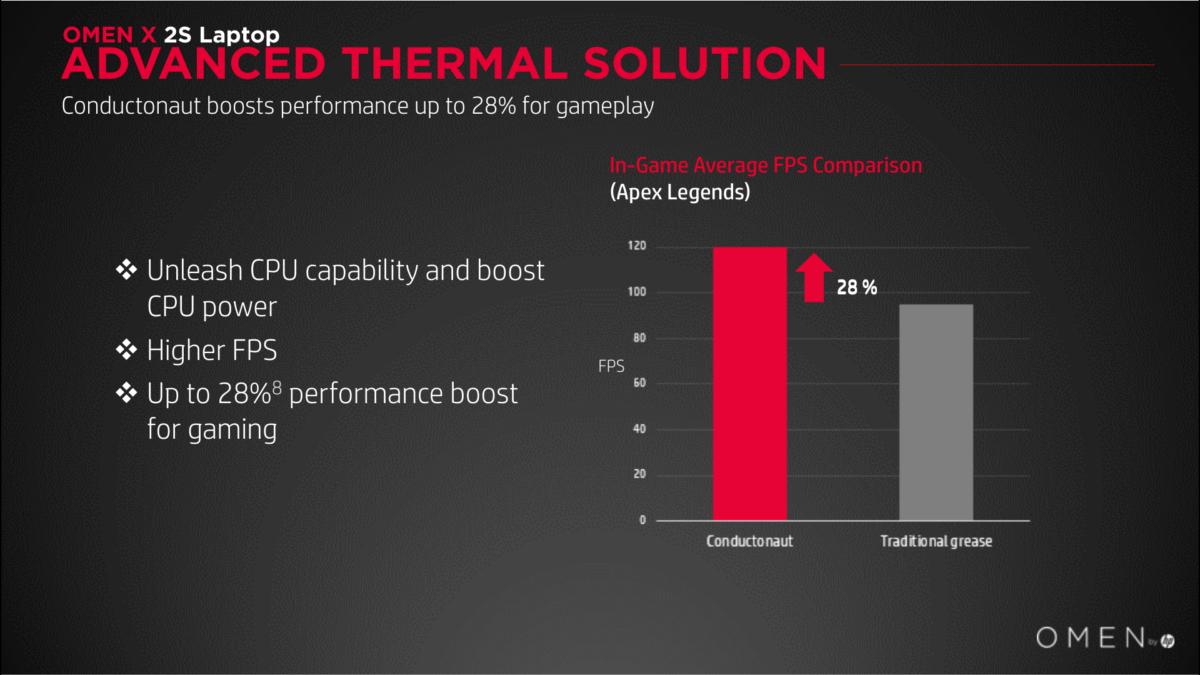 HP claims that its use of liquid metal compound for cooling in the new HP Omen X 2S 15 will yield a considerable performance improvement over cheaper, more common thermal compounds.

To close out our preview, we should also tell you that HP says upgrades should be fairly easy. Remove the bottom panel and you can access two M.2 slots and two SO-DIMM slots. That may sound like a no-brainer, but many thin gaming laptops have resorted to inverting the motherboards and putting the M.2 and RAM slots out of reach without removing the motherboard first. That’s rightfully scary for most people.

The last spec is also somewhat important: the battery size. HP said it didn’t want to compromise too much on battery life, so the Omen X 2S 15 features a 77-watt hour battery, good for about five hours of use. That may underwhelm you, but the blame mostly lies with G-Sync. Nvidia’s G-Sync requires the laptop GPU to be connected to the display, which means the graphics card will always be running. That just murders battery life.

We’ve seen some laptop vendors simply give up on battery life and put in small 50-watt-hour packs, which yield even worse battery life. We’d predict the battery life on the Omen X 2S to range from meh to blah, which is still better than some gaming laptops that range from horrible to “what’s wrong with this thing?!”