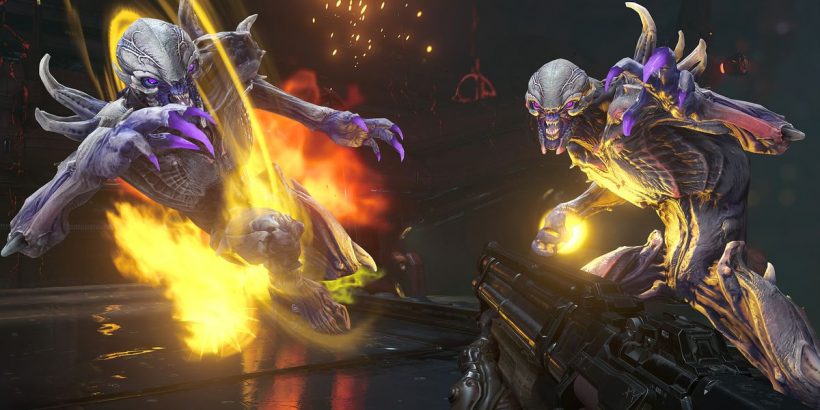 The Doom Slayer’s saga will come to an end when id Software and Bethesda Softworks release The Ancient Gods — Part Two, the second expansion for Doom Eternal, on March 18. While that story has already provided some pretty wild twists and turns across two games and the downloadable content, the biggest question will soon be what comes next, and how closely it’s tied to this version of Doom’s universe.

In an interview with Polygon, Doom Eternal game director Hugo Martin likened it to different directors taking on adaptations of comic book characters. There were the original Doom games, then the horror-heavy Doom 3, followed by the return to a more action-oriented take on the series in Doom (2016), and now Doom Eternal and its two story-driven add-ons. If each of those eras in Doom’s history was like Batman under the care of Tim Burton, Christopher Nolan, or Zack Snyder, the next game id Software releases in the franchise will likely continue under the same umbrella as this current series.

“While this is the end of the story arc that began in Doom (2016), we planted a lot of stakes in the ground with that story,” Martin told Polygon. “And we’ve been able to flesh out a lot of those things throughout the course of [Doom Eternal] and to do two DLCs. So that story arc will end, you know, from the time you woke up in the sarcophagus to the end of the DLC, but there are more stories to tell with the Doom Slayer, for sure.”

Know what you are, see where you’re going

This is a process that’s been going on since the creation of Doom 3: How do you keep a franchise with this much history alive and fresh for a mainstream audience? How do you manage what players expect out of a modern game along with what fans of the original games remember about them that made them first fall in love with Doom? It’s a huge challenge, but the developers say they’re getting better at it.

“Those conversations were hours, days, you know, where we would debate what is Doom, what isn’t Doom, what feels like Doom, and what doesn’t feel like Doom?” said Marty Stratton, Doom Eternal’s executive producer, in describing the making of 2016’s Doom. “It kind of feels almost silly now to think back about some of those things. Because it was such an intense time of, like, we’re trying to reinvent something that has been out of the spotlight for a long time, but does mean so much to so many people. So those conversations were very long.”

The most important aspects of Doom are easy to summarize, if not implement: Doom is fast, and Doom is mean. The game should push you to always move forward, always bring the attack to your enemies, and do everything you can to become more powerful. The conversations about what does and doesn’t fit into that ethos might have taken up a lot of time in the past, but defining what makes the franchise so good was a worthwhile endeavor, and it continues to pay off.

“I think those conversations are much, much shorter now,” Stratton said.

Sometimes, though, they do get it wrong. Martin said that the crouch feature in Doom (2016), a button press that made you smaller, wasn’t Doom. If you have a problem in Doom, the answer should almost always be running at it, trying to kill it, and, if possible, getting even bigger, not reducing your own size.

“You feel liberated when you play Doom, like, I need armor, I will set you on fire right now and saw you in half and take what I need. I will not wait behind that rock for those things to just slowly regenerate,” Martin explained. “I need it. Now I take it.”

A game about how you should always aggressively take what you need might sound unpleasant, even ugly — which is why Doom has to strike the right tone.

“There’s an aspect of Doom that it looks like it was concepted with a ballpoint pen in 1985 on the back of someone’s notebook in math class,” Martin said. “I mean, there is this juvenile quality to everything in Doom. And I think it is critical […] to make it all fit, I do think that tone is critical.” As Martin pointed out, this is a series where the hero canonically has a pet bunny named Daisy.

The good news is that the team at id Software seems to have found the right direction for the franchise, as evidenced by the data the designers collected about the number of people who played and beat Doom Eternal. While the game introduced a lot of movement options and combat systems that all had to work together, players didn’t seem to find it too difficult or complex. In fact, Doom Eternal appears to have hooked players in an even deeper way than its predecessor did.

It may seem like the Doom series is operating under many constraints, but its current setting still offers a number of places for future games to explore, according to Martin.

“Could we tell a story about when [the Doom Slayer] first came to that place with the Sentinels, almost like a more medieval setting, a fantasy setting?” Martin asked. “I think as you play the DLC, too, you’ll see lots of hints of what we could do moving forward. Maybe even in the future. Again, our hero is somewhat timeless — I mean, literally, he’s immortal. So we could tell all kinds of stories.”

While The Ancient Gods — Part Two may bring closure to the story that began in 2016’s Doom, it’s going to leave behind a universe in which many things are possible, as long as the designers don’t lose track of the reasons people play Doom games: the over-the-top violence and gore, the winking self-seriousness mixed with a little camp, and the complete faith that the best defense is a good offense. Martin sounded almost drunk with possibilities during our call.

“It’s as if Sam Raimi was given a Transformers budget to go make a sequel to The Evil Dead — that’s what Doom feels like, to us,” said Martin.