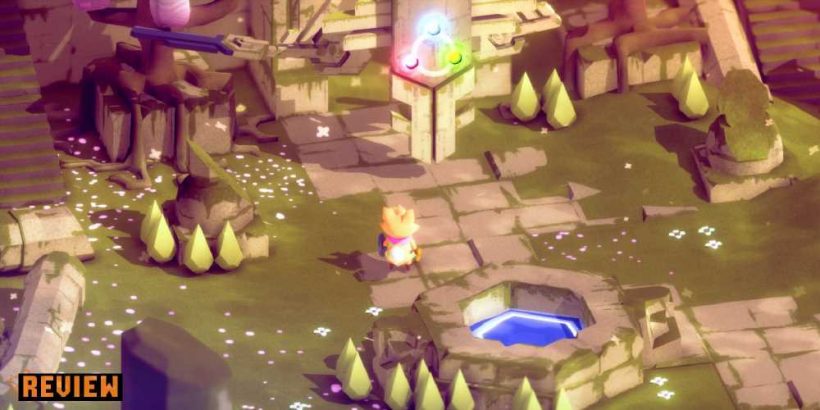 Tunic says very little about itself. Even when it does, you can barely comprehend its words; after all, its script is made up of characters that resemble phonetic writing or even ciphers that, at least on your first few hours, would likely be indecipherable. Instead, it broadly gestures at its intentions and motivations through the layout and colourful flora of its environments, its seemingly gentle ambience, and the mysterious, glowing pages scattered across its map.

Tunic introduces you to its scenic world through a wee fox cub who also barely says a word. The cub is washed up on an empty shore with nary any equipment, other than the tunic on its back. As the cub, you’ll totter, somewhat hesitantly, towards a winding flight of stairs and into an inviting cave, where a treasure chest lies. Within it is your first tool: an unassuming but sturdy stick. You take it out and swing it about haphazardly. Then you whack your first slime with it. Poof! The slime’s dead. Then you continue hitting some more of those dastardly slimes. More, and more, and more, until you’ve hit a roadblock in your rampage—and then you’ll probably turn around and make a detour elsewhere.

Tunic is, essentially, just like this; you’ll fumble, experiment, and unravel its mysteries by trial and error. Take a step towards the drawbridge and see what new creatures await your arrival. Step under the canopy of a dense forest and discover a hidden path towards an untraversed part of the map. Throw a colourful bomb towards a hoard of encroaching enemies and watch the turmoil unfold. The game largely dispenses with the quasi-customary, compulsive need of most titles to explain themselves to the player, instead trusting you to intuit where you should go next, what you should be doing, and what specific items do. But this isn’t so much of the unbridled freedom that triple-A open-world games tend to bluster about, where you’re allowed to do whatever you want. Rather, the point of it is discovery: there is still an invisible quest line to follow, even if there’s no glaring arrow to point you towards your next goal, no quest-giver to explain your heroics, and no desperate villagers or forlorn princess to rescue from the clutches of death.

That said, the game does drop some hints in the form of loose pages, strewn across its world. Put them together, and you’ll realise that these are remnants of a beautifully illustrated strategy guide for playing and understanding the secrets of Tunic. It’s reminiscent of the instruction manuals that used to be bundled with the physical releases of games—you know, back when games came in the form of cartridges or CDs decades ago. Even so, Tunic remains deliberately obtuse. The guide is predominantly written in the obscure script I mentioned earlier, with only a few key words translated to English. The pages, for the most part, still require some deciphering. 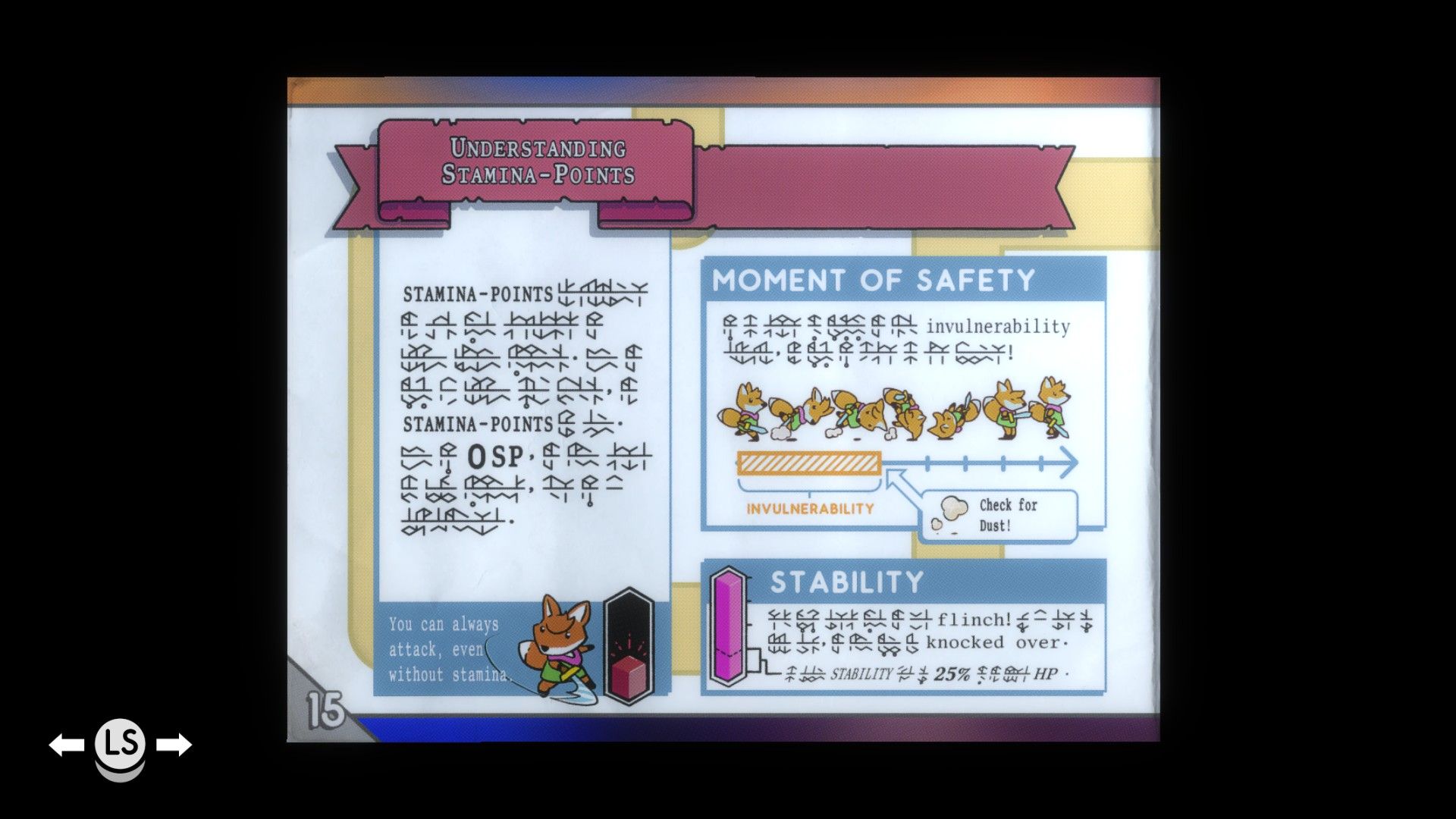 To put it bluntly, I often struggled with Tunic. This was an adventure that was difficult to embark on, with specific sections almost feeling like I’ve just spent an eternity in them, as I knock my head against barricades I can’t quite get around. Some combat encounters, too, were challenging and tense, with the game demanding a measure of dexterity and nimbleness against enemies that confront you in a variety of ways: rotound knights will swing their giant swords, wandering spirits will spit projectile ice shards, and fox priests will lunge with lighted candles. But challenging as they may be, these obstacles don’t detract from its effusive charm; in fact, the struggle is often the point.

Tunic is a game in love with the whimsy of Zelda, and this can be seen in its pastoral overworld, its scavenging of items and exploration of secret passages, and even in the way its plucky fox hero moves. Battles are hard-won and discoveries are enchanting—sometimes even magical—in the very specific way that harkens back to the days of classic Zelda. These were games played on the Game Boy and NES, when you would discuss with friends about the best course of action after ploughing through the Lost Woods hopelessly, or by cowering under bedsheets at night, meticulously studying the dense lines of a strategy guide or games magazine to discover precious clues, much like an archaeologist examining the remains of ancient artefacts. By shrouding its instruction booklet in a runic language, Tunic wants to replicate the rich, wistful nostalgia of these moments, while turning the game into a communal experience like that of these bygone days—or, at the very least, introduce such moments to a new generation of players who have never lived through them. In other words, it wants to make us feel like kids living through the very specific era of ‘90s gaming once again. 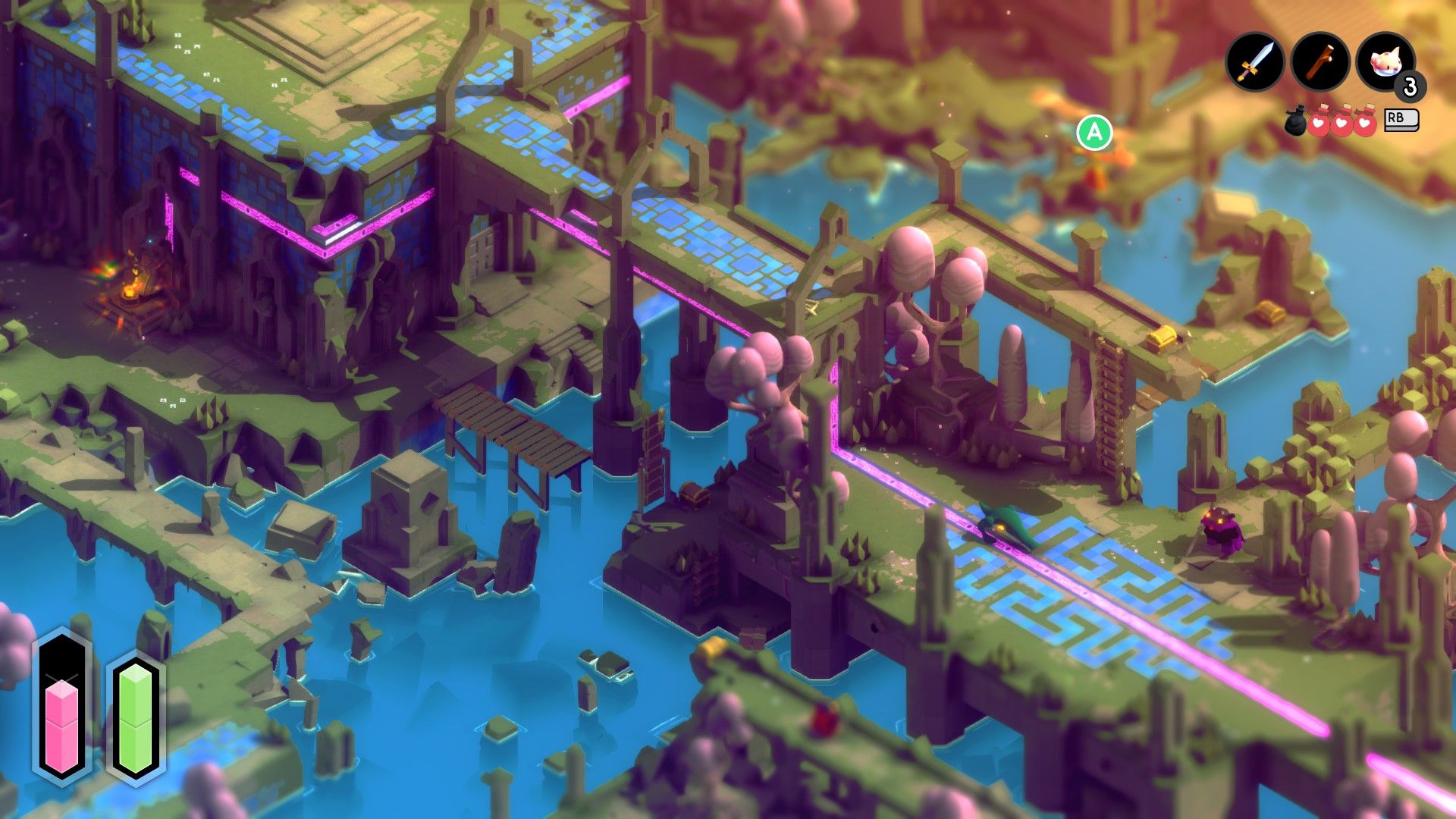 The ingenuity of Tunic’s in-game strategy guide builds up to the same sort of anticipation I had while looking at physical manuals and magazines as a wee child: of finding out what new secrets these pages will hold, as well as revelling in the wonderfully hand-drawn, fully coloured illustrations that stretch across the pages. Even more invigorating are the doodles and annotations on the pages of Tunic’s guide itself, as if written by a past hero, which offers a bit more insights into the game’s splendid esoterica, such as the cryptic meaning of its runes, cards and other strange relics (I would have loved it even more if Tunic were to let me etch my own unsightly scribbles on the pages themselves).

Discerning the meaning behind the pages’ clues and secrets is part of the childlike joy of Tunic itself. Yet, perhaps paradoxically, this nostalgia is one reason why the game is, in equal measure, both frustrating and whimsical. Tunic is ultimately a memorial to the zeitgeist of gaming in the early ‘90s, but it also ports over some of the idiosyncrasies of retro games from that era, even those bits I don’t like—such as being stuck on a level with seemingly zero recourse, pacing up and down a map repeatedly for an hour or two, and smushing the fox against walls and trees and waters and pillars in hopes of some sort of miracle. Some clues can be figured out from the instruction manual, but the caveat is that the pages are also part of the game’s trove of collectibles that need to be uncovered and found, so you’ll be missing crucial pages at times. Given that these roadblocks are closely tied to progression, you can expect to be stuck for a while, until you accidentally discover that you’re actually supposed to perform a very specific manoeuvre on a very specific brightly coloured tile—something you may not have guessed without first collecting the pages. 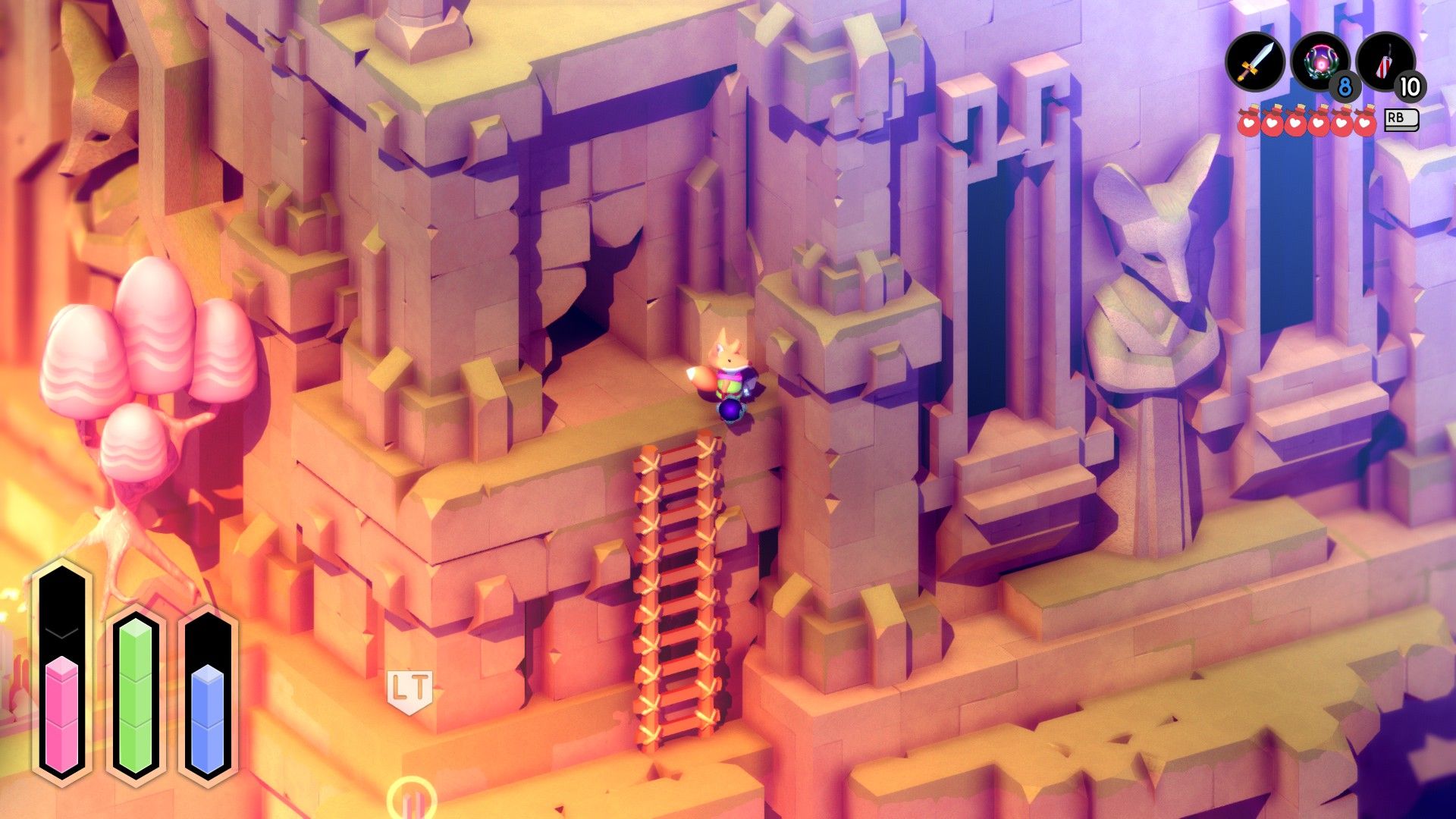 Then there are certain passages themselves, which may be obscured by the unwieldy camera angle, or an unfortunate shadow that keeps these paths hidden. At several points I was unable to progress for hours because I couldn’t discover the route towards the next point of the game, only to realise that that’s because the opening was eclipsed behind an offending pillar. Figuring these don’t feel like moments of player ingenuity, but are instead laborious affairs that can thwart your streaks of accomplishment.

But there’s no denying the irresistible charm of Tunic. Even if its mistake is its fixation with the very rose-tinted days of classic Zelda, Tunic still is an evocative experience: you’re still embarking on an epic hero’s journey marked by stretches of tranquillity, tantalising mysteries, and hard-won victories, powered by a nearly infinite fountain of nostalgia. In the end, I can’t help but feel increasingly enamoured by the sights and encounters. And by the time you get to the dungeons and underground fortresses, you’ll already lulled into a meditative state, as you give in to your impulses to marinate in Tunic’s sheer abundance: its atmospheric soundtrack, its crisp combat, and its resonant adventures. You become a child once more, eyes glued to the screen, fingers cemented on the buttons of your controllers, piles of notes strewn across the table, as you mindlessly hack at everything in sight: ghostly knights, creaking skeletons, and oversized bosses. How many more hours do I want to keep playing? As long as the night would last, and till the early hours of dawn.

Score: 4/5. A review copy was provided by the publisher.