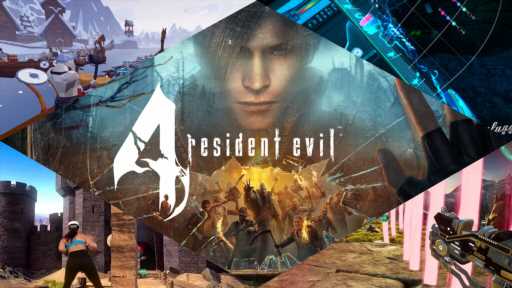 There has been some virtual reality (VR) filled months in 2021 but October definitely looks like it’ll be taking the crown. This past week’s hardware reveals have been quite intense and next week there are more videogames to get excited about, one, in particular, is returning from the grave.

For those that love getting fit in VR, Viro Move aims to have it all, combining a selection of rhythm action styles in one experience. Designed to help improve stamina, agility, and cardiovascular fitness, Viro Move features separate sword, punching and shooting gameplay modes or the Weapons Master mode that switches between them all.

Oculus Quest videogames feature heavy next week and none are more unique to the platform than Anotherway’s Unplugged. Utilising the headset’s hand tracking capability to the max, Unplugged is all about unleashing your inner air guitar rock god, playing classic tunes like The Kids Aren’t Alright by The Offspring and Ozzy Osbourne’s Flying High Again; all with your hands. Strum and play a virtual guitar, trying to impress the crowd with your axe skills.

Resident Evil 4 caused quite the commotion when it was announced earlier this year. Not only for the fact that one of the biggest entries in the series was getting a VR edition but that the title would be the first Oculus Quest 2 exclusive. Armature Studio has rebuilt Capcom’s classic with immersive VR controls, manual reloading on the guns, dual weapon handling, seated and standing support, and much more. The 2005 entry took players deep into rural Spain, tasked with rescuing the U.S. President’s daughter from a cult called the Los Illuminados.

A Viking-inspired rhythm action title from French team WanadevStudio, Ragnarock hit PC VR headsets during the summer followed by an App Lab release for Quest. Next week is the official Oculus Quest launch of Ragnarock, a drumming videogame featuring a mix of metal and Celtic songs from Alestorm, Gloryhammer, Saltatio Mortis, Wind Rose and more.