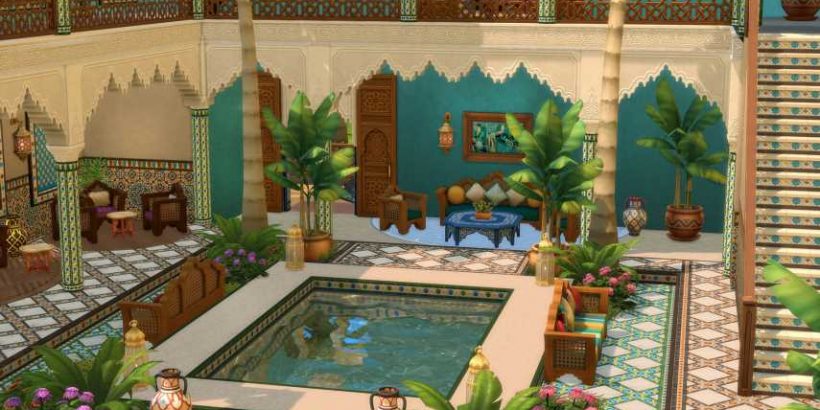 The launch of a new type of Sims 4 DLC, the Kit, was met with about as much excitement as the Moschino Stuff Pack and a similar amount of confusion to My First Pet Stuff. While the concept sounds great, the initial execution was somewhat lacking, leaving many Simmers, myself included, feeling frustrated. Now the team has launched Courtyard Oasis, the first follow-up Kit to the initial launch line of Bust The Dust, Country Kitchen, and Throwback Fitness. While there’s still a way to go if the concept of the Kit is to reach its potential, Courtyard Oasis is a step in the (beautifully tiled) right direction.

The inspirations for this Kit are the riads of Morocco and it’s evident in every piece. From the intricately tiled stairs, archways, flooring, and walls to the vibrant seating and patterned lanterns, the Moroccon influence is clear. It matches well with several in-game items, especially the Caribbean-inspired base game update, yet still looks noticeably unique. It also contains some items that are versatile enough to fit into builds outside of the outdoor courtyard focus. This combination, plus the larger number of items, come together to make this the strongest Kit released to date, offering hope that this new type of DLC has a bright future. 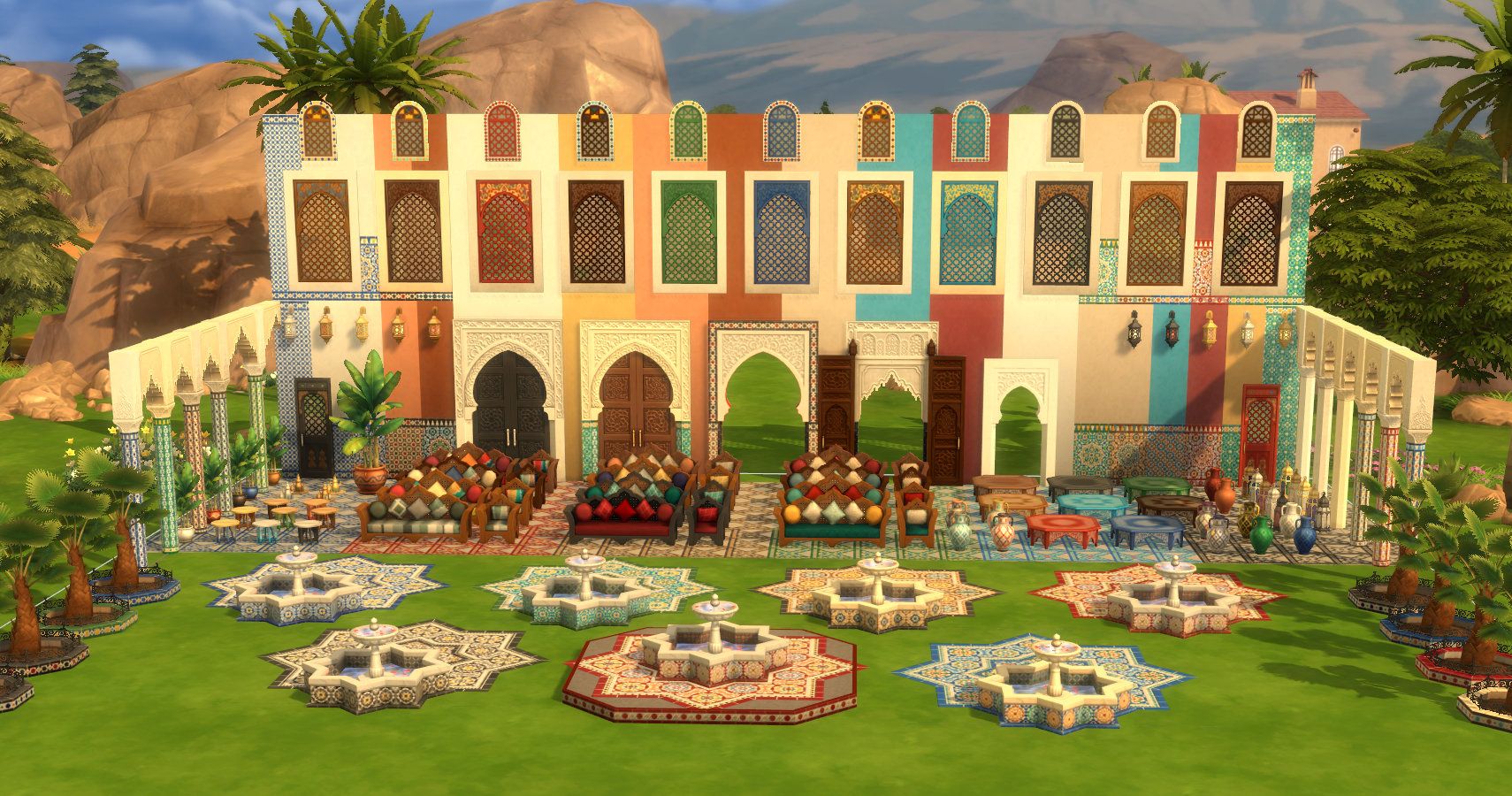 The idea of Kits is that they are bite-sized content packs tailored to specific playstyles. Items are limited which means that development time is reduced, allowing more niche themes to be explored. As we’ve seen with previous Kits, the actual item collection is quite small. However, in this case, it’s noticeably larger than before. The first build-focused Kit, Country Kitchen, comprised just 14 items while this one has 29 – more than twice as many.

We all know that quality isn’t always related to quantity but with something like a Kit, where the focus is solely a selection of themed items, it’s difficult not to let the number of items included influence your judgement. While it makes sense that an item Sims will interact with, like a stove or fridge, will be more difficult to develop than a plant or a table, quite honestly, the average gamer probably never even considers these things. This means that the larger selection of objects really helps the Kit stand out. Although, there’s more to Courtyard Oasis than that. 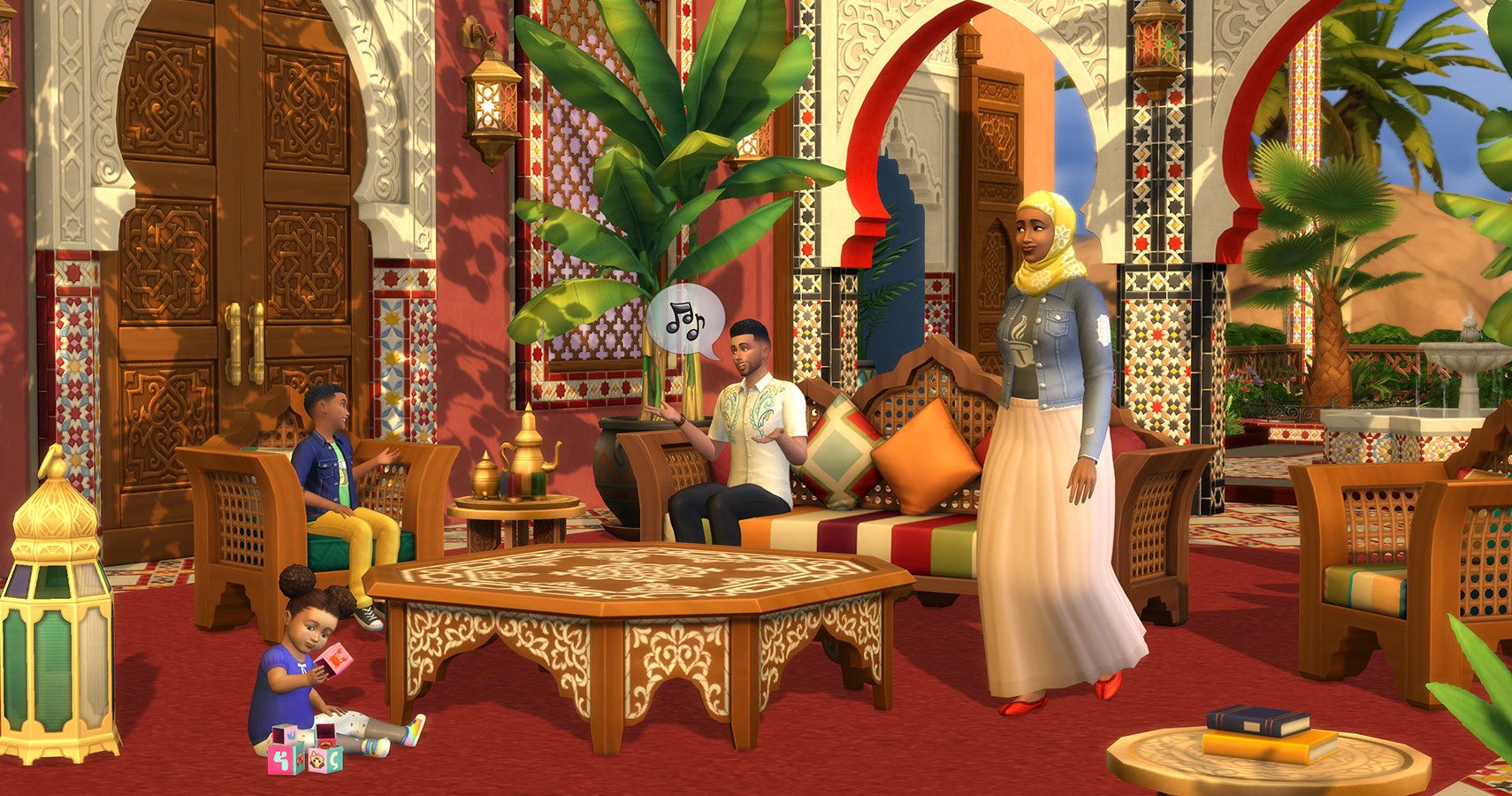 What makes this pack interesting is how it introduces a unique blend of furniture types that fit in with the game, yet stand out as different. For example, there is a level of detail in the tiling and other patterns that we rarely see. Time has been spent to make these pieces feel more authentic. Mosaic tiling is supposed to be uniform yet eye-catching and the patterns capture that aesthetic. This attention to detail is replicated across Courtyard Oasis with the intricate designs you’ll spot on doors, windows, and pillars. There are several complimentary swatches that span all the items, including platform foundations. They range from quite neutral and more understated to bold and eye-catching.

There are beautifully patterned archways and doors for tall and short wall heights, as well as some pillars and spandrels that scale well with larger spaces in particular. The doors themselves include two different designs, with one side being a plain door and the other having a door covered with an archway. This two-in-one design hasn’t been done before and the layering of the archway and door presents a new look for The Sims. Previously archways and doors could only be layered with move objects cheats, which can interfere with how they function. Now that functionality is in the game itself, with no need for mods or workarounds. 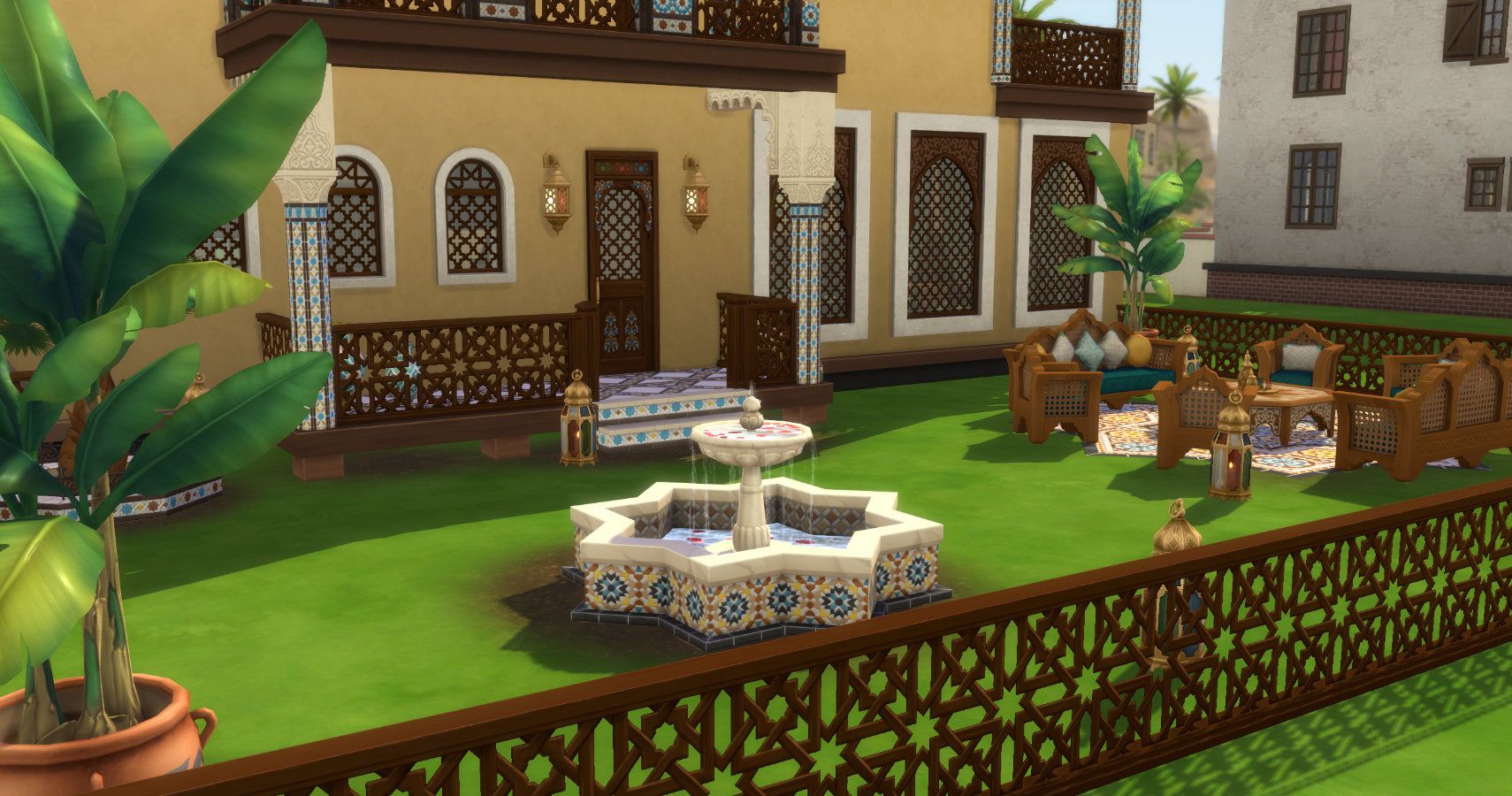 Everything about this pack is grand, including the size of the items; although this is actually one of the few negatives. The plants come in one size, which is extra-large, and while the tiled planter makes sense on this scale, the potted plant looks really out of place. It can be sized down but we can’t help thinking that having the size slightly reduced as standard would have made more sense. Also, while there are some smaller doors, it’s disappointing that we have four different types of large doors and archways, with two being very similar, yet only one door and archway in a smaller size. One of the larger door and archway combos being smaller would have added quite a lot of versatility for those who rarely use the tallest wall height in builds.

Despite these niggles, the pack itself is more diverse than expected. The sofa and chair, as well as the tables, would look great in any home and the best thing about the side table is that it’s actually small. Many of them are the same size as dining tables, so while the coffee table may still feel a little large, it’s good to have a sensible sized alternative that feels more in scale. The flooring and walls can be used externally or internally, and the vase and tea set are the same. The lanterns, fences, pillars, and fountains are obviously external features but they match well with other items. Most importantly, the swatches match. Everything has at least six variants and you can coordinate everything or mix and match.

Overall, Courtyard Oasis nicely blends quality and quantity, offering a good variety of items that can be used in different types of build. This feels more like a complete kit, showing a range of versatile furnishings with a common theme and a good selection of swatches. While the kit may not be the best value DLC, that was never its intention. It was created to appeal to a specific playstyle, in this case builders, and offer a themed selection of versatile and usable items. On this front, it has delivered. Over the last few years, we’ve seen other DLC types go from strength to strength. It appears that despite the rocky start the humble Kit is doing the same, at least for builders. Here’s to the next ones offering well-designed and engaging content to stylists and storytellers as well.