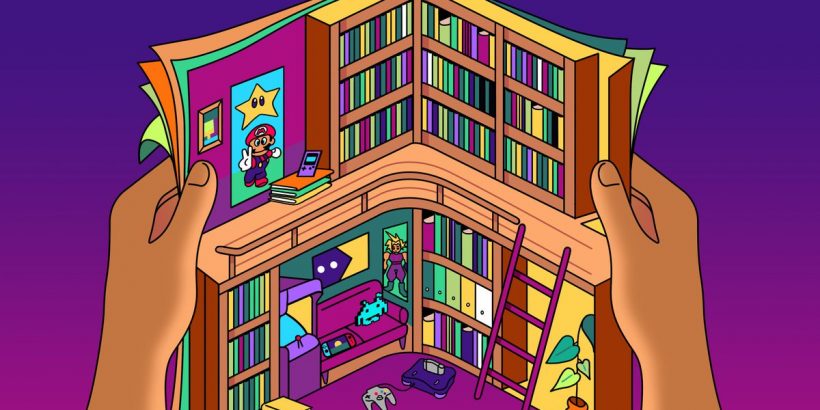 In 2013, I was just starting to really get paid to write about video games. Video game magazines were drying up, but I wanted to know about the history of my field and get a sense of where the “old game journalism” had gone right and wrong before the print magazines started to go belly up. That’s how I started down the road of owning hundreds of issues of various game magazines. While the project had started as an intellectual exercise, it quickly turned into something else.

As a kid, there was a certain thrill to opening up a new issue of Electronic Gaming Monthly. I lived in a small southern town where Walmart was the only place to buy games, but EGM was a lifeline to a world of constant releases, previews, and industry rumors. Ripping through its pages, most often purchased from a local grocery store instead of the much-inferior Tips & Tricks, I could imagine a world of games that I didn’t have access to. I could read about Japanese imports or the upcoming platfomer where the devs had, shockingly, given the main character a gun. I absorbed opinions about games and series I didn’t know anything about, drawing a map across a whole universe of games that I had no real expectation of ever playing.

I had access to the internet as a kid, but it was scattered and unpredictable across my rural childhood, and so these magazines were my primary connection to the world of games. I didn’t have access to video game news sites or forums for hours of leisure time, as much as I wanted to, but I could get a magazine and pour over every word. I could learn the latest rumors about Devil May Cry or speculations about what the Xbox was going to be. This culture of hints about the world to come still exists, of course, but instead of the flood of new speculation that we now have via the internet, as I kid I read the same article over and over again, trying desperately to connect the words with my mental picture about what the game could possibly be.

When I started collecting EGM as an adult, I wasn’t trying to recreate my youth. Instead, I wanted to revisit its world in order to understand my own construction of how to think about games. I recognized that these magazines were a critical link about how I understood what makes a game good or bad, worth my time or a waste of it, and collecting was a way of stringing my past and present together to understand my own making. I wanted to know what I passively took to be markers of quality that might still dwell, unquestioned, in my evaluative brain.

After all, these magazines had fully captured my imagination. They sold me the past, present, and future of games all at once, instructing me on how to transform myself from someone interested in games into a “gamer.” Progressively better graphics, more “cinematic” stories, and the continual march forward of technological progress were understood to be inherently good, without any questioning of the market logics that underpinned those ideas. Bound up in this were things that spoke directly to me as a tween boy. The magazines made jokes about moms and girlfriends and how much I could stick it to both of those groups by enjoying Grand Theft Auto III. The magazines taught me that there were Congressional members and lawyers who were out to take my games. I learned to anticipate the end of year issue so that I could note the next year’s biggest releases (which, as I now know, were sometimes sight-unseen). All of this happened in the same pages.

When I started seriously trying to assemble a complete run of Electronic Gaming Monthly, I’d look for complete years as much as I could, and I would studiously hunt for the expensive first few dozen issues. Sometimes I would buy a bulk lot of mixed magazines for a prized single EGM. One time I was able to grab the magazine’s final two years in one fell swoop. Putting the collection together felt a little like piecing out a puzzle. By laying a year out on a table and going from issue to issue, I could watch rumors turn into pre-release hype and see reviews shift into post-game features. I could look at the entire lifecycle of a game’s press existence in a dozen pages spread across as many months. I wasn’t in it for the ads or the articles or the columns in isolation. I was collecting these magazines because they mapped an entire world of interests in a way that just doesn’t exist in the same way anymore, even in still-running magazines like Edge, which have largely transformed themselves into something different than the hype machine magazines of my youth.

I’m not alone in my desire to reconstruct some kind of past out of these magazines. I asked Jess Morrisette, another aficionado who has recently been digging through older game magazines and posting interesting pieces on Twitter, why he was so interested in them. Via direct message, he told me, “If you want to appreciate how people understood the games industry — and how the industry understood itself — in decades past, old gaming magazines are a valuable starting point. Those moments when things feel especially puzzling by today’s standards — how did that feature get published, or why did they think that ad was a great idea? — can offer real insight into how gaming culture has evolved.” It’s precisely this understanding of how things got from there to here that I was chasing in my own collecting. I wanted to know how our culture had changed or, as Morrisette put it to me, “how it has failed to change with the times.”

What I got out of the magazines, in the end, was less than I thought I would. I better understood the contexts of the 1990s and early 2000s. I could feel the physical weight of the advertising industry that kept specialist magazines afloat during that time, and I could see all the wildest attempts that they took to make you care about any given year’s Madden title. Most instructive to me was the realization that my interest in games was built with magazines, but it certainly didn’t stay there. The brevity of the reviews made them decidedly unmemorable, but the deep-dive features, the interviews, and the postmortems, truncated as they often were in those published magazines, kept their shine.

The ability to sit with a physical object and trace history is undoubtedly a huge benefit for those of us who want to parse through the past, but after a couple years I realized that I didn’t need to keep accumulating those magazines. The more I purchased, the more the same stories, recycled bits, and off-color jokes all started to look the same. I realized that an under-thought reality of the video game magazine was that a new one had to come out every month, and that the same writers would end up reflecting, issue after issue, mostly the same perspectives on a slightly shifting cohort of games. After this pattern laid itself bare, I pulled my foot off the gas. Nothing left to bother with.

I abandoned retro magazine collecting a couple years ago, after assembling a huge number of EGMs and more than my fair share of PC Gamer. After moving heavy boxes multiple times, I realized that I might not need to keep buying new magazines to revisit the past in this particular way. After all, these magazines were not giving me the warm and fuzzy feeling that so many people report when they play the actual games of their youth. When I felt like I understood the map of the time that they provided for me, the compulsion to keep grabbing more pieces of that map died.

Video game magazine collecting, like all collecting around games, seems to have become even more expensive and difficult over the past few years. It’s probably unlikely that someone today will pay only $2 an issue for half of EGM’s run like I did. If you just want the information contained in old magazines without the hassle of physical collecting, RetroMags has a vast catalog of them. If you want the thrill of a single issue of history in your hands, the Video Game History Foundation has you covered. It’s easier than it has ever been to explore video games’ recent past or to relive the thrill of diving deep into a singular issue, although you might not be able to hold them all in your hands.

I walked an odd road with magazine collecting. It started as self-education and turned into something more. I never completed my run of EGM, though I got close to it. Even though I stopped collecting, I still haven’t let it go. Deep in my office closet there are several bankers boxes where Electronic Gaming Monthly still lives, nearly two decades of magazines ordered neatly, ready for me to dive deep into whenever I feel like it. Even after working through it all, and thinking I’ve left it all behind, I can’t manage to throw it all out with the trash for reasons I can’t quite pin down.