Tom Clancy’s The Division 2 is a game about shooting people and running around picking things up. Is the story too political? Is it apolitical? Different people are likely to see different things, and everything about the game’s story is going to be contrived when the essential action is becoming an American agent operating on American soil shooting American citizens.

But it’s so easy to overlook the game’s forgettable story when the moment-to-moment action is so damn good.

The simplest random encounter in The Division 2, single-player or multiplayer, can turn into an all-out fight to survive. I try to play it like a cover shooter, but the AI brilliantly, and relentlessly, forces me out of that cover using hand grenades, suicidal rushers waving metal batons, or enemies circling me with an antagonizing skip-to-my-lou dance.

There is no way to overpower my adversaries by stats or grinding alone. My two options, from level 3 to level 30, are either to git gud or get help. And getting help, from the AI or other humans, is where I find the heart of the game.

NPCs are much more involved and effective than their Big Apple predecessors in the first Division game. I work with civilian settlements whose residents fight, with real guts, to retake city blocks and intersections. In one firefight I was holding on for dear life behind an algae-blooming fountain, waiting to see a sniper’s flashlight so I knew where to aim, when two friendlies ran up and shot the bastard like a rabid dog.

I made up an emergent narrative for them on the spot: Meet Tim and Kim! They, uh, are analysts for the Department of Health and Human Services, and have season tickets for DC United! But what was remarkable was that I was the one drawing fire while Tim and Kim made the final kill. Friendly characters will rush to your aid when you fire a flare to signal the start of a control point battle, and you can always join them in battle if you stumble upon them fighting off one of the game’s enemy factions.

All that being said, I had to call for human help when I had trouble surviving on my own, and The Division 2 makes that process so, so easy. While cooperative matchmaking in The Division took place inside a safe house well before the action started, The Division 2’s drop-in system places the focus on shared fun. All I have to do, at any point, is call for backup, and backup will usually arrive quickly in the form of a friendly human player. I also get regular reports of agents looking for backup as I patrol the streets, and I often jump into the games of others so I can help. When the notification says the agent is on a named mission, as opposed to free-roaming, I drop everything. 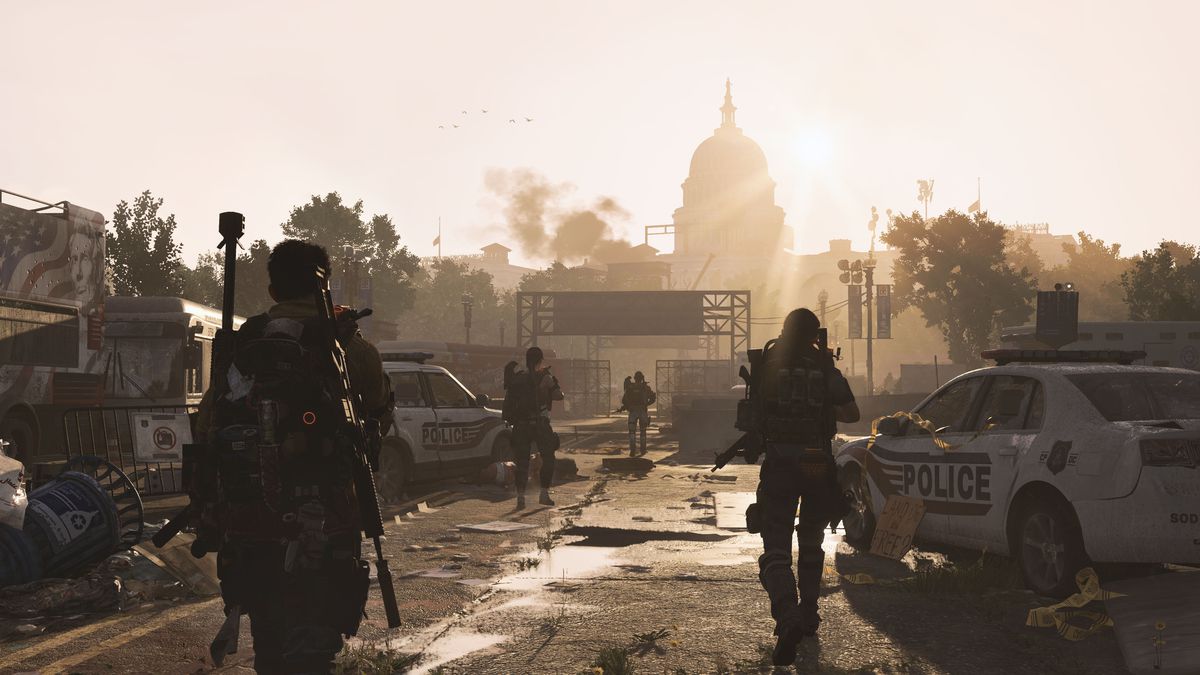 In this temple, as in the hearts of the people for whom we saved the Union …
Massive Entertainment/Ubisoft

Just hanging out in the world of The Division 2 is great fun, even if the setting can be grisly. My friends and I decide to tackle a story mission, but find out that civilians are being executed nearby, so we dive in to help. There are always control points to take over or side missions to attempt, and I never know when we’ll run into random enemies to fight. I don’t really need a plan about how to play The Division 2 before I start a session with other people, because we always sort of just find stuff to do. And there is a lot of stuff to do, complementing the main story and its impressive set-pieces and pitched battles.

The downside to all this is that The Division 2 is a very hard game to play solo. The intelligence of the enemies, combined with the numbers of them that the game throws at me, makes playing with someone else all but mandatory. The community seems to understand this, and is made up of overwhelmingly helpful, positive folks, at least in my experience. Everyone wants to help, because they know that they will soon also need help.

It’s a nice counterpoint to the idea of everyone turning on each other when things go bad, as portrayed in the game. In real life, when things get hairy in The Division 2, the players come together. And the game’s difficulty system manages differences between players well, buffing underpowered players while they’re playing with friends or strangers who are at a much higher level.

The Division 2’s enemies have consistent and fair tendencies and weaknesses — snipers panic when I flank them, for example. The game is still in love with the idea of a great big guy in a riot helmet as a level boss, but now AI teammates will hit or at least expose weak points where they couldn’t in the original game, and calling for backup makes it easy to scale my attempts to finish each mission when I get stuck.

And, while the story-based campaign and leveling system provide plenty of thrills, it takes about 50 hours to actually get to the real shit. The endgame is where I can now choose between playing as a sniper, a bomber, or a non-specific character who can do a bit of everything, and join up with other super-achievers to take down a tougher gang called the Black Tusk.

But I have to think carefully about how I want to fight long before that point because of the new weapon customization system, in which each enhancement carries both a bonus and a performance detractor. I bought, crafted, and slapped mods into every available slot on every gun I carried in The Division, but doing that in The Division 2 is a good way to end up with a muddled split pea soup of an arsenal.

The new system makes me think very hard about whether I value a rifle’s effective range more than its sway, or whether I’m willing to give up some accuracy in order to hit harder. It’s a rewarding, sometimes frustrating balancing act to get my arsenal exactly how I’d like it, and I ultimately focus on two or three weapons and sell everything else as loot to a vendor. I also talk with the teammates I play with regularly, to make sure our loadouts and upgrade paths complement each other to make squad-based tactics more effective.

Tom Clancy’s The Division 2 is a huge game. I feel its sprawl in the time it takes to run the length of the National Mall in Washington. And yet it all loads and runs like a dream, making this a technical achievement as much as an artistic one. There are no wheels being reinvented here, no new ground broken, but all of my complaints about the first game are addressed and improved upon. And Tom Clancy’s The Division 2 is just fun piled upon fun, sometimes despite its ridiculously serious tone, often because of it.