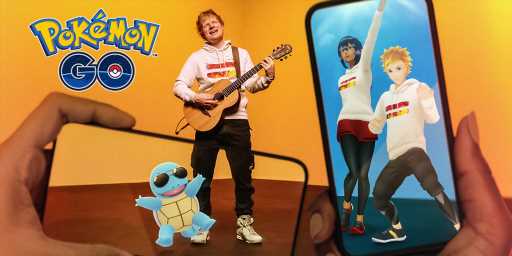 With so many companies and brands expressing their plans for the metaverse, one technology will be key for early adopters – Augmented Reality. AR technology primarily uses smartphones and, to a lesser extent, smart spectacles to adapt the reality we see around us, often adding a new layer of interactivity. Because this tech uses hardware most of us already own, it’s easy to see that one of the ways the metaverse will start being pieced together is via AR videogames and apps.

If you cast your mind back to the summer of 2016, you’ll remember a large portion of the public were wandering parks and streets trying to catch Pokemon. Pokemon Go, created by Niantic Labs, uses AR technology in a few ways; by overlaying Pokemon onto a map which you are physically walking in ‘the real world’; it uses the camera in your phone to show the Pokemon against the backdrop of where you are currently; and it allows you to interact with other players through their avatars within the game, while they might be stood only a few metres away in-person.

It’s not only Pokemon Go capitalising on AR; Spokko Sp. z.o.o. adapted the popular videogame franchise The Witcher into a monster-slaying game; Niantic Labs grabbed another Nintendo franchise with their recent Pikmin Bloom release and in 2018, developer Ludia brought Jurassic World to mobile platforms so that we could capture a T-Rex in our local parks. Games are a great playground for developers to try new technologies.

Pokemon Go is still a very popular mobile game five years later and the AR technology used by Niantic Labs is advancing steadily. In early November 2021, the company announced Niantic Lightship, a platform dedicated to the development of Augmented Reality which can be shared with other developers. This new technology is built for the metaverse, using our phones to capture images and use machine learning to translate that footage into an accurate 3D model. Alongside this, consumers will be able to view particular objects through their phone screens and enjoy a unique experience collaborating together, or creating memories at concerts, like the upcoming Ed Sheeran performance due to take place within Pokemon Go.

However, what started with gaming, is growing into a slice of the metaverse that will become available to anyone with a smartphone. The possibilities for AR are constantly being explored. Coachella, the American music festival, is implementing AR features that will enhance a band’s performance as lights, colours and creatures mix with the live-action on stage; Science Museum Group plan to use the technology to bring their exhibits to life and take strides to further education; while the meditation app, TRIPP, will use this tech to help users become more mindful while out in the world.

As people become more familiar with AR, our phones will transform the way we interact not only with the world, but also how we shop or converse with each other. From the small ideas such as IKEA creating an app that places furniture choices in the intended room for you to see how it will fit your home style. To the big brain concepts – Google is using AR to power their language translation apps and visual search engine with Google Lens where you simply point your camera at foreign wording to see it translated in real-time. Plus, projecting directional arrows onto the ground or floating in the air, to plot a journey in Google Maps. Of course, there’s still a way to go before we’re all connected to each other in a central metaverse. However, these games and apps point to what we can expect from the future.

This link between AR and smartphones is integral, not only to keep consumer costs low but because the hardware is powerful enough at this stage to implement the tech needed. All forms of AR require several pieces of hardware which every smartphone has – camera, speakers, microphone, accelerometers and processing power. Depth registration, which places a digital item overlaid onto our world, needs that camera. The accelerometer gauges distances and moves the AR objects based on how the user moves. Most important, is that processing power; with so many AR apps and games, the processor must use machine learning to crunch algorithms in order to decipher what the camera, and thereby the user, is observing.

At first, AR was feeling too many as a bit of a gimmick. It’s now evolving into a genuinely helpful and impressive piece of technology that could impact our daily lives. The beauty of this technology, starting with gaming, is that it proves an accessible entry. The public can make the leap from throwing pokeballs to using AR in the workplace. With incremental movements within apps, soon projecting videos against a wall during a meeting with colleagues which can then be edited or annotated by anyone in the room, through their phone, could become a metaverse standard, with swish 3D avatars.

To get a sense of where AR is heading, it’s worth sticking close to videogames. Euclidean Skies is a puzzler that has a lot in common with Escher sketches. Holding your phone in front of you, labyrinthine buildings take over the empty space of your living room. These can be turned and rotated to solve the puzzle. While Smash Tanks conjures digital tanks, with a battlefield, and lays it out on the floor with no mess to tidy once you’re done. Each of these games contains the same technology that we’ll see from developers working on Niantic Lightship.

Just these two games can point towards other uses of the technology or other apps available which use similar ideas. Thyng is an interface that projects images and short video clips within a shared space; perfect for meetings in tiny offices. Quiver is a kids AR app which, when paired with colouring pages, brings a child’s artwork to life using the colours the child used.

It’s not a stretch to imagine that one day you’ll raise your phone, look through the screen at a friend and see their digital avatar. If we’re to believe Niantic Labs, it’s not much of a jump to walk over a bridge in your hometown with your phone held out and watch as the scene fades into what that bridge looked like fifty years ago, everyone digitally dressed in period clothing. Or for a group of kids touring a museum to be handed tablets that bring ancient worlds to life before their eyes or whisk them away to stand on the edge of a volcano.