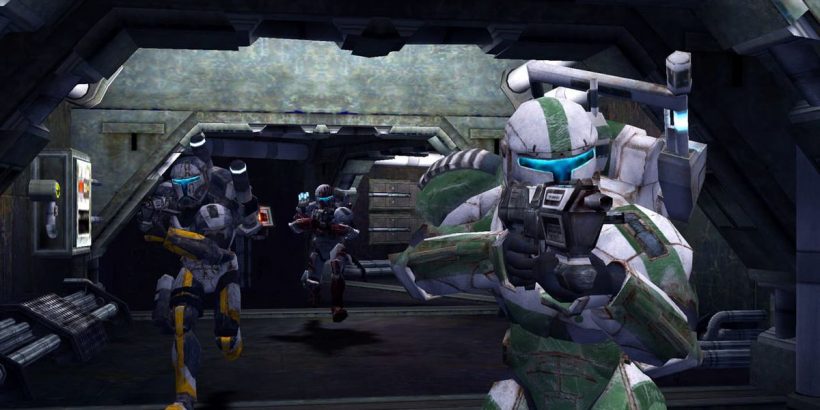 2005’s Star Wars: Republic Commando was based on the idea that Star Wars games didn’t need to take place either in a vehicle or with a lightsaber in your hand.

There are other ways to tell stories in this fictional universe, from strategy games like Empire at War to first-person shooters like this one focusing on infantry instead of warrior monks. In fact, Republic Commando is being re-released on PlayStation 4 and Nintendo Switch to reintroduce fans to four very capable merchants of death.

So the question for today comes in two parts: Is Republic Commando worth playing in 2021, and how well does the Nintendo Switch hardware deal with this port of a 16-year-old game?

The story follows the exploits of Delta Squad, a group of four elite clone commandos who get sent in to do the jobs that standard soldiers can’t. Each member of your team has their own personality and special skills, and it’s up to you to give them orders saying where to go and what to do while fighting alongside them as the fourth member of the unit, the leader.

You view the battlefield through the slightly warped display of your helmet, which gives you tactical information, highlights what needs to be done, and gets cleaned by a sweeping, crackling line of electricity that acts as a virtual windshield wiper, burning off alien blood whenever it splashes on your face. These are just aesthetic details, but they sell the idea that you are a killing machine who has been kitted out with impressive equipment to get the job done.

Republic Commando consists of eight to 10 hours of tightly scripted battles in which you and your squad have to protect the interests of the Republic against the Separatists, and those rogue forces are not going to go down easily. Don’t worry, though; you’ll find upgrades for your standard-issue blaster, pick up weapons dropped by the enemy, and heal yourself using bacta tanks that are strewn all over the game’s world, despite the lack of logic. It was nice of the enemy to install healing kiosks ahead of our invasion!

You can order your teammates to blow something up, take cover, attack a particular target, or move into position to provide cover fire, but those tactical choices are limited to a few set areas in each major battle. If the sniper can take position above you, for instance, you’ll see the highlighted area telling you that’s possible. That may sound limiting on paper, but in practice, it helps keep you focused on your own actions in between making a few decisions about where your teammates should go and what they should do. This is the arcade version of a tactical shooter, and Republic Commando does a good job of balancing its existence as a fast-paced action game with the more deliberate nature of highly trained and skilled operatives.

This isn’t a game you’ll return to over and over, due to the heavy emphasis on a linear story with large-scale set-pieces hinting at the much bigger war around you. But it’s absolutely worth playing through at least once, or playing again if you haven’t touched it since its original release.

Each battle feels intense, even on the lower difficulty levels, due to the sheer amount of stuff going on around you, the variety of the enemies, and the constant chatter of your squad as it reacts to changing conditions on the battlefield. That effect becomes less pronounced the second time, though, once you can see how much of the combat is set up to appear like a pitched battle without actually offering one.

How does it play on Nintendo Switch?

The Nintendo Switch hardware may be a little underpowered compared to other modern consoles, but it helps that Republic Commando is an older game that doesn’t require a huge amount of processing power. The graphics are clean and details are easy to make out, but the frame rate stutters occasionally as you move from area to area or during large gunfights. It’s a small distraction that doesn’t take much away from the enjoyment of the game.

Since Republic Commando is a more methodical, story-based take on war games, split-second reflexes are rarely necessary. The sometimes murky textures and hitches in gameplay aren’t likely to cost you a life, and as long as there’s at least one member of your squad alive, you can always be revived.

The biggest issue I had with the port was the yellow text from the subtitles, which were displayed at the top of the screen and often blurred into the background, making the words hard to read. Tilting my view down to change the contrast between the text and the background usually fixed it, but a small adjustment to the placement, size, and color of the subtitles would have fixed the problems entirely.

I happily played Republic Commando on a Switch Lite and enjoyed every minute. It felt great to be back in Delta Squad, especially now that I’m able to take that experience with me.

Star Wars Republic Commando will be re-released April 6 on Nintendo Switch and PlayStation 4. The game was reviewed using a Switch eShop download code provided by Aspyr. Vox Media has affiliate partnerships. These do not influence editorial content, though Vox Media may earn commissions for products purchased via affiliate links. You can find additional information about Polygon’s ethics policy here.