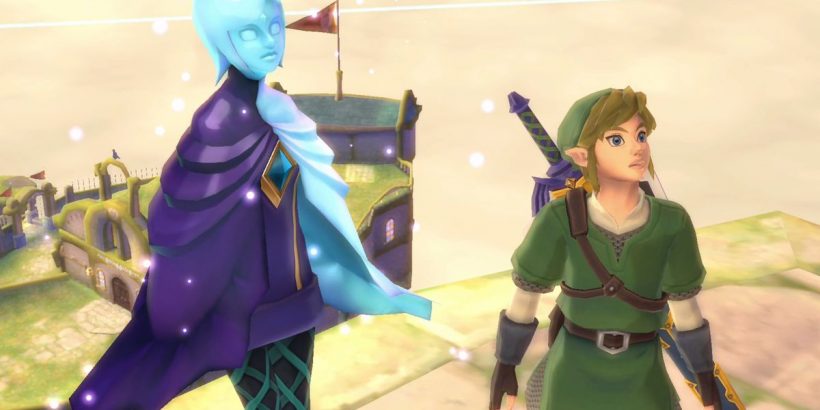 In The Legend of Zelda: Skyward Sword, characters find solace in playing their part in a grand tradition. The earliest chronological renditions of Link and Zelda, the two characters who will be reincarnated time and again throughout The Legend of Zelda’s intricate timeline, are more than happy to carry out the roles they’re told are their destiny. Every other major player in this story feels the same way.

Take Groose, the game’s loud, overconfident heel. He begins his arc by trapping Link’s Loftwing, a race of rideable companion birds that let the citizens of the airborne Skyloft village fly to neighboring islands. He jealously complains about how Link and Zelda are together all the time, how they get special treatment from the village higher-ups. Yet by the end of the game, he’s content with his supporting role in the story and happy to help however he can.

The Skyward Sword remaster finds the same sense of purpose in tradition as its characters do. When it released in 2011, it both felt like it was abandoning what made the Zelda series great while holding on too dearly to traditions from later entries in the series. But it also shows now, as it did when it first came out, how rewarding some traditions can be to uphold, and it makes a concerted effort to introduce them to more people, even as it showcases why Zelda had to move on from them.

In 2011, some Zelda fans saw Skyward Sword as the most clear-cut case yet for how the series had lost its way. Zelda games had always been about exploring a world that seemed massive, about uncovering little nooks and caves without being told to. But as the games entered the 3D space with Ocarina of Time and focused more on grandiose stories and setpiece dungeons, that sense of discovery seemed to take a back seat, with Skyward Sword breaking the series’ focus on exploration altogether.

A few hours into my playthrough of the Switch remaster, I decided to do a fly-by of all the floating islands on the game’s map to see what secrets I could find. It was a pretty short survey, because you can’t land on most of these rocks. The islands you can land on are small and aren’t meant to be explored; they’re holding grounds for chests you unlock by hitting “Goddess Cubes” in the game’s actual overworld down below.

Instead of exploring and finding secrets, you’re funneled from section to section, especially in the game’s opening hours. Skyward Sword’s three major locales — Faron Woods, Eldin Volcano, and Lanayru Desert — are more levels than areas to explore. In Faron Woods, I met a character who sent me along a straightforward path to activate some Goddess Cubes so I could go get the corresponding chest later highlighted on my map. I solved a few puzzles, unlocked a few shortcuts, then solved slightly more complex puzzles inside the first dungeon. For my efforts, I got a new item. I could clearly see the points where the game wanted me to come back later, once I had more tools like this at my disposal.

That’s the flow for most of Skyward Sword, and realizing how rigid it will be is disappointing. But it was much more disappointing in 2011. The way Skyward Sword funnels you from objective to objective, with exploration as an afterthought, felt like the series abandoning what had made it special. The last Zelda game before Skyward Sword was Spirit Tracks, a portable entry that was even more, well, on rails. It felt like the Zelda that people had grown up on had disappeared, and this new version was here to stay.

Playing it in 2021, knowing that Breath of the Wild has revitalized the series’ sense of exploration, it’s easier to appreciate what Skyward Sword does well without the weight of the series’ future hanging on it. In my initial impressions of the Switch version, I attributed the game’s rigidity and slow start to it being the Zelda game for the Wii, the console that expanded Nintendo’s audience and introduced a generation of people to video games. When you think about Skyward Sword being built for the Wii remote and the audience that came with it, a lot of the game falls into place. It explains why the game feels so railroaded, why it explains so much of itself to the player.

More importantly, it explains what I love about Skyward Sword. More than any other Zelda game, it feels rewarding to take part in the Zelda tenets Skyward Sword abides by. Combat has always been a part of the series, but in Skyward Sword, it’s more of a cornerstone than ever. Designed around motion controls with the option to use the right analog stick on Switch, it’s more intricate and involved than most other Zelda games. It asks you to think about which direction you’re slashing, since enemies will block attacks coming from certain directions. It feels good to swipe in the right direction, even if it’s not difficult to do most of the time.

Similarly, most of the new items are notable for their physicality: the bug net you can swing around in circles, the drone you fly to cut strings and carpet-bomb enemies, the whip you fling back and forth with a satisfying snap. All these actions feel great, more so now that you can do them all with a regular controller instead of using the still-finicky motion controls (though the gyroscopic aiming is a welcome option).

That focus on physicality extends to the design of both the outside sections of the overworld and the dungeons. Compared to other Zelda games, the dungeon designs aren’t all that intricate; most of them are one or two floors tall, and their rooms are spacious rather than labyrinthine. The path through them might have you revisiting rooms a couple of times, but you always know where you’re going. I was stumped a handful of times on my second playthrough, but never for long.

The dungeons can be disappointing at times, especially when you compare them to some of the more complex dungeons in the series. But they work because of the focus on how you do something instead of figuring out what to do. You learn how to bomb various objects with the drone beetle in the Lanayru Desert, then layer on a time-traveling mechanic and another item, the Gust Bellows, inside the Lanayru Mining Facility dungeon. This flexes your ability to stack different kinds of logic together, and it felt good not just to figure out a solution, but to execute. Solving puzzles in Skyward Sword has an analog feel to it, like turning knobs and levers on a complex machine, so I didn’t mind the solutions being so straightforward.

Things in Skyward Sword feel good to do, which isn’t something I can say about every Zelda game — even the ones I like better. The Eagle’s Tower dungeon in Link’s Awakening might have one of the smartest hooks of any Zelda dungeon, but boy, is it a pain to move those boulders around. The infamous Water Temple in Ocarina of Time might be one of the most intricate in the series, but it straight-up broke me and my brothers the first time we tried to conquer it.

Breath of the Wild’s numerous shrines might be a joy to discover and its Divine Beasts impressive technical feats, but they all feel like an expression of the same (brilliant, generation-defining) formula that’s better expressed in its overworld, where finding improvised solutions feel more at home. Skyward Sword’s dungeons are bespoke, purposeful, and thematically distinct, something I especially missed in Breath of the Wild. In the Ancient Cistern dungeon, I was not only using the whip to flip switches, swing across gaps, and take down phoenixes with glee, but taking part in what felt like a stage play loosely inspired by The Spider’s Thread. The Lanayru Sand Sea and Sandship not only feature a pair of stupendously cool gimmicks, but also have an arc that alludes to the enticing history of the region and closes with a harrowing boss. Moments like these make it easier to embrace the fact that you’re being guided along.

Between these moments, though, Skyward Sword gets caught up in detours that make its adherence to the series’ dogma downright aggravating. The last couple of Zelda games before Skyward Sword’s Wii release had sequences that acted as intermissions between dungeons (the Triforce Quest in Wind Waker, the Tears of Light sections in Twilight Princess), so Skyward Sword has them too. You get the Silent Realms stealth sequences that lose their novelty after the first run. You have to keep beating The Imprisoned, a dopey-looking boss that resembles something out of Yoshi’s Island, back into its prison multiple times. You have to do an escort mission backtracking up the side of Eldin Mountain, made all the worse by the little shit of a robot who puts you through it because it thinks it’d be fun to spite you. There’s a lot of backtracking at the 11th hour of the game, dragging things out just as you’re about to go into the final act.

I dreaded these sections, but they’re not as bad as I remember; it helps that you get through text much more quickly now. But playing through them knowing what came next for the series, it’s obvious Zelda had to change. It had become too mired in its own traditions of creating bigger dungeons, delivering more elaborate setpiece moments, and getting too caught up in its storytelling to leave players to their own devices. Simply iterating on these things wasn’t helping.

As Nintendo itself points out, Skyward Sword birthed several of the things Breath of the Wild used to break the series’ mold, like a stamina meter, resource collection, and item durability, something I remember distinctly thinking in 2011 that I never wanted to see in another Zelda game (it’s good in Breath of the Wild, by the way). These concepts are all present in Skyward Sword, but the game doesn’t really know what to do with most of them. These are concepts meant for a game with more freedom.

Skyward Sword wanted to keep Zelda fresh and exciting, but it did this by making the things you already did as part of its formula feel good instead of finding new ways to do them. But for a series about exploring at your own pace, simplifying dungeons to make them more fun to complete wasn’t going to cut it for much longer. The focus on action, on pulling off simple-but-cool things, only works on a platform built around how fun its controller is to use, and it only works once. After this game, Nintendo had to do something different.

When I go back and play other Zelda games, I’m thankful for how they actually let me loose on a world full of surprises I can find at my own pace instead of being led directly to them. But there’s plenty of things I miss about Skyward Sword, too. It’s brilliant in ways other Zelda games can’t be, thanks to its refined combat, meticulously built dungeons, and surprisingly heartfelt story about coming to grips with destiny. Revisiting it in 2021, with its more rigid traditions now broken, it can breathe a little easier. It’s played its part.

The Legend of Zelda: Skyward Sword HD released July 16 on Nintendo Switch. The game was reviewed on Nintendo Switch using a pre-release download code provided by Nintendo. Vox Media has affiliate partnerships. These do not influence editorial content, though Vox Media may earn commissions for products purchased via affiliate links. You can find additional information about Polygon’s ethics policy here.