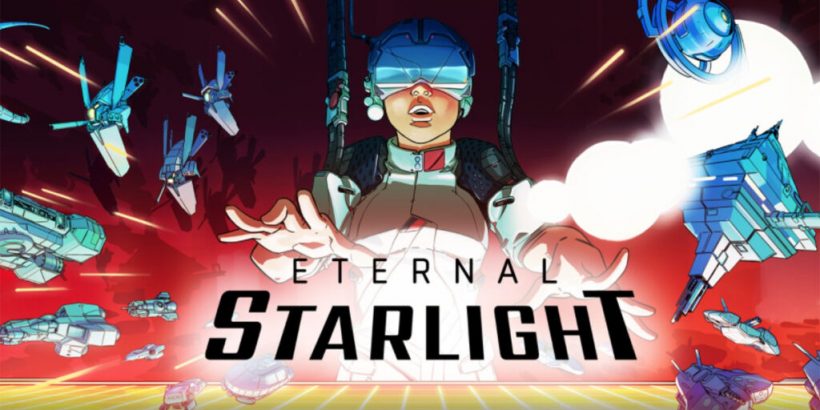 Games like Elite Dangerous can offer some pretty epic battle scenarios to those who love space-based battles but they also take a lot of time and effort. If you’re looking for something far more manageable, with a real-time strategy (RTS) flavour, pick-up and play gameplay and some decent replay options then White Noise Games’ new virtual reality (VR) title Eternal Starlight ticks plenty of those boxes.

Set in a future where mankind is no longer living on Earth because we’ve ruined it again for the millionth time, Eternal Starlight revolves around our new home of Proxima. This needs defending at all costs and to do this you need to build and manage an armada of spaceships. These consist of both human and alien technology gleaned from friendly races you choose help along the way, in turn giving Eternal Starlight plenty of scope when it comes to strategy whilst encouraging you back to give it another pop.

Because Eternal Starlight isn’t an RPG where you spend hour after hour toiling away, carefully building your fleet in an expansive world. This is an RTS with permadeath where you can fail a mission but if you die then that’s it, all those resources and ships are gone in an instant and you’re back to square one, kind of. It’s this kind of functionality that serves titles like Until You Fall and In Death: Unchained so well, dropping you back to try again, tweaking your strategy as you do so. And it works just as well here.

You’re given a single flagship and one accompanying fighter to being with and via each mission, you can earn resources to buy more fighters, hull and shield upgrades or, if you’ve got a lot of cash some bigger support ships which can be independently controlled. So you can have them in formation around your flagship, off on their own scanning nearby objects of interest or conducting a nice flanking manoeuvre when in battle. They can all be upgraded in a similar fashion with your flagship having the greater number of weapon and mod slots to turn it into a proper space tank.

Eternal Starlight isn’t a game you figure out on the first playthrough as there are plenty of little facets to keep you thinking. While the campaign storyline does suffice don’t expect some epic space opera, its way too bare-bones for that. But it does set up the other races with a total of five which you can align yourself with. Doing so will give you access to their technology, from ships to upgradeable parts. If you really focus your mission selection on one race they’ll provide reinforcements for the big boss battles – which is certainly needed.

Your main opponents are the Kraya who plan on attacking Proxima in seven days, which equates to completing seven missions of your choosing. Each run will randomly generate what missions appear which is great for making each run slightly different. Sometimes you can focus on the alliance of one race, whilst at other times a more balanced approach is required. Whatever you choose those seven days remain locked and you have to complete the impending battle whether you’re ready or not. Win, and you can continue, given another week to prepare for the next onslaught. Even after death and the frustration of losing all your tech you’ll instantly want to try again, Eternal Starlight can get quite addictive.

The battlefields are fairly compact and the majority of the main missions can be completed in under two minutes, usually consisting of protecting a friendly vessel or just cleansing a region of enemies. Battles are viewed from a third-person perspective where you grab a ship and plot its course by dragging it along. Now, this means that for the most part Eternal Starlight is always viewed from the widest possible viewpoint, moving your ships around like little toys. There is the ability to zoom in and get right in the thick of it during battles, which looks good yet it hampers your ability to command your fleet massively. There is a handy watch that highlights each vessels health and from where you can activate special abilities but it never felt like it did enough to become an essential tool.

Gameplay tends to be slow and methodical, so while it can get visually busy with lots of cool little projectiles and ships flying around, they don’t always instantly react to a command, especially where movement is concerned. At points, the flagship just spun in a circle for several seconds as if it was unclear about which way to go, as a gigantic explosion began to engulf it. As all the levels are set in space you know you’re going to get a lot of stars and the odd planet but the actual battlefields can be fairly sparse at times. There is a bit of environmental variation with asteroids floating around or clouds of dust to hide in but a bit more would’ve been nice.

If you’re playing on the Oculus Quest then you also have the option to choose hand tracking. Eternal Starlight and hand tracking seemed like an ideal combination (at points it is), however, the feature is still too inconsistent to reliably complete later missions. Grabbing ships was finicky and trying to draw a flight route was always a gamble. Another little interaction issue is with pressing buttons. In the main hub, you’re presented with flat panel screens like you’re on the Enterprise. But everything requires a finger highlight then a button press – or a hand tracked finger pinch. It doesn’t feel satisfying or immersive.

There are other little annoyances with Eternal Starlight. The intro cockpit where you can accidentally hit the story trailer which then can’t be cancelled whilst waiting for the videogame to load. Or the inability to twist the world alongside shrinking/enlarging it with your hands/controllers. On the plus side, Eternal Starlight is very comfortable to play seated, standing and in roomscale, with the option to activate joystick movement and turning if you really need it.

Most importantly, Eternal Starlight has lots of replayability. Not only do you have the random missions and the varied alliances, doing so permanently unlocks their ships to use within the skirmish mode. It’s still a single-player where you can mix and match yours and the AI fleets before each battle, getting a great feel for your opponent’s abilities.

Eternal Starlight is available for PC VR headsets and Oculus Quest, certainly feeling more attuned to the standalone with the paired back graphics and the built-in hand tracking. There’s plenty of content on offer if you love RTS gaming with options galore to keep you coming back for more. Even though it isn’t a perfect experience and larger, more insane battles would be great, Eternal Starlight is still wonderfully fun to play.