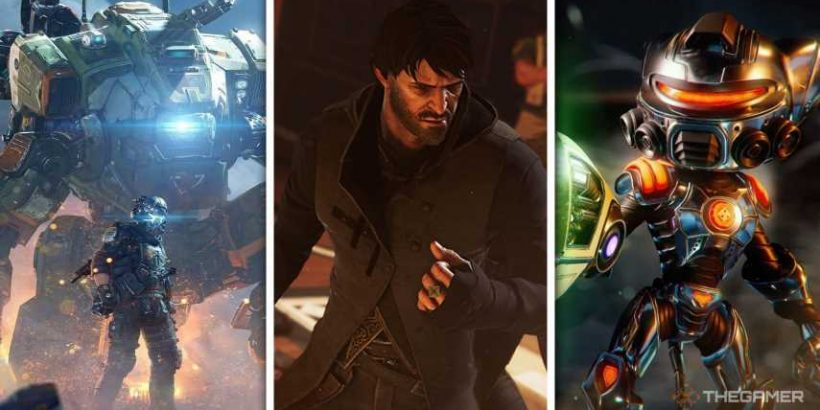 Ratchet & Clank: Rift Apart does some nifty stuff with rifts. While fighting over the Dimensionator, the device backfires (what else is new) and causes an infinite number of Dimensional rifts and anomalies to spread out all across Rivet’s universe. The rifts are used as hiding places called pocket dimensions where the heroes can find armor pieces, as well as to create cinematic moments in boss fights and action set pieces as Ratchet and Rivet are instantly thrown between multiple dimensions. In terms of gameplay, however, the rifts are pretty underwhelming. For the most part, the only thing you can do with rifts is use them to pull yourself forward to designated places on the map. Mechanically, the rifts are basically just grapple points with fancier animations.

That is, until you get to Blizon Mines on Blizar Prime. You’ll go to this planet after your visit to Zurkie’s on a mission to find an energy source for the Dimensionator. When Rivet and Clank arrive on the mining colony, Rivet is stunned to discover that a catastrophic incident has caused the utter destruction of everything that once existed here. Lucky for them, there’s still a way to find the Phase Quartz they came for. The Blizon Crystal pieces scattered around the rubble have somehow absorbed the rift energy created by the Dimensionator. By striking these crystals, Rivet can travel back and forth between her Blizar Prime and a version of Blizar Prime that has not yet been destroyed.

This power allows Rivet and Clank to journey through Blizar Prime and eventually locate the Phase Quartz they’re after. Anytime the duo comes up to a locked door or a destroyed bridge, a nearby crystal will allow them to swap dimensions and find that the door is now destroyed, or the bridge is now intact, and so on. You need to work your way through both version of Blizar Prime and learn the layout of each map in order to make your way to the end, making this the most unique planet in the game. 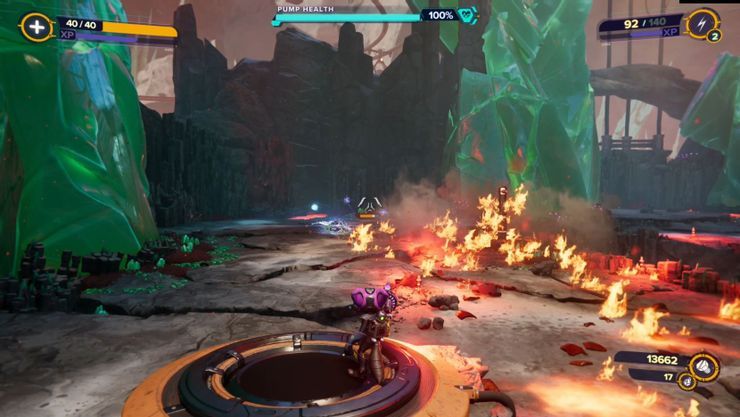 If you’ve played Titanfall 2, then Blizar Prime should immediately remind you of Effect and Cause, one of the most beloved levels in the game. Rather than interdimensional travel, Effect and Cause allows you to swap back and forth between two fixed periods in time. The principle of the level design is exactly the same though. In both cases, the ordinarily simple act of navigating linear paths becomes a puzzle that requires you to orient yourself in both space and time. You can only progress by swapping dimensions/time periods at the right time, and it can be easy to get turned around or forget where you’re going if you don’t keep your destination in mind. These are standout levels in both games because of how much they subvert the most basic mechanic of almost any game; navigating through the world.

Since there isn’t any Phase Quartz to be found in Rivet’s dimension, The duo has to locate the drill in the other dimension and mine some for themselves. Unsurprisingly, it turns out that using the laser drill is what caused the major catastrophe in Rivet’s universe in the first place. Suddenly, Rivet and Clank have to work together to prevent the same grim fate from befalling this version of Blizar Prime.

Using the dimension swap to discover Blizar Prime’s past echoes another iconic video game level. In the Dishonored 2 level A Crack in the Slab, the hero uses a magic timepiece to travel back in time three years to the night of a fateful seance. The entire level takes place in a sprawling mansion that is dilapidated and run down in the present, but pristine and full of life in the past. There’s certainly an element of puzzly exploration to A Crack in the Slab, just like there is in Effect and Cause, but Dishonored 2’s take on this type of level combines the mechanics with the themes and story in a way that’s much closer to Rift Apart does with Blizar Prime. The timepiece is a narrative tool that allows us to explore both a space and plot. We’re compelled forward by our desire to find out what happened that night, just as we’re compelled to forward in Rift Apart to find out what happened to the mining colony.

While similar, all three of these levels have a distinct purpose and style. These one-off time travel levels stand out because they’re perfect examples of the gameplay changing to adapt to the needs of the story. In the expert hands of a studio like Respawn, Arkane, and now Insomniac, a cool gimmick like time travel becomes an iconic piece of level design and storytelling.