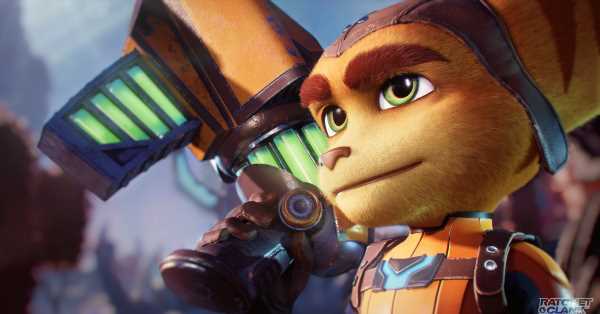 Ratchet & Clank: Rift Apart, the first new game in the Ratchet & Clank canon since the PlayStation 3 era, packs a high-tech punch mere moments into its opening. After some beautiful cutscenes setting up the story, I guide Ratchet and Clank out into a parade honoring them both. The game’s protagonists take an elevator to a float as the infamous Captain Qwark summarizes the story of the original game (very convenient for newcomers to the franchise). But then I’m distracted by a confetti cannon. With a single whack of Ratchet’s wrench, the cannon fires hundreds of pieces of confetti into the air. The light shines around it, off the floats and the crowd, and the pieces of shredded paper lightly fall through the air. This is Rift Apart’s “next-gen” moment.

Rift Apart is one of the first few games that’s exclusive to the PlayStation 5, resting comfortably behind titles like Astro’s Playroom, Demon’s Souls, and Returnal. More than just being a fun Ratchet & Clank game, Rift Apart also showcases the power of this expensive new machine that’s taking up a lot of shelf space in your home, if you managed to purchase one. And showcase it does, implementing some of the same incredible PS5-only features that Astro’s Playroom showed off. But unlike Astro’s, Rift Apart is a full-length adventure.

Throughout my time with Rift Apart, I kept thinking of Sony Santa Monica’s God of War (2018). I know, stay with me on this one. Both God of War and Ratchet & Clank are old staples for Sony, character action games that started well over a decade ago. With God of War’s resurrection in 2018, Sony Santa Monica overhauled almost all of the series’ familiar gameplay, making something new and better than before. Insomniac takes the opposite approach with Rift Apart, choosing to reinvent everything around the game while keeping the familiar, wacky weapons and third-person adventuring the primary focus.

This is the most modern Ratchet & Clank game yet, adding a playable female lead named Rivet to adventure alongside Ratchet for the first time in 19 years. But it’s also comfortable living with its legacy as a goofy, kid-friendly, character action game. As a longtime Ratchet & Clank fan, the game’s structure and gameplay didn’t surprise me. But that’s OK. Rift Apart is doing so much to modernize the series through its systems, tech, and story that the familiarity of the gameplay is actually a great comfort.

A new level of control

You can see the power of the PlayStation 5 through Rift Apart’s visuals, but the most impressive developments come from the DualSense controller.

When I move Ratchet forward and he steps down with his right foot, the right side of my controller makes the slightest rumble. The same thing happens with his left foot. As I sprint around the world, there’s a small “pitter-pat, pitter-pat, pitter-pat” reverberating through my hands. When I break some boxes to collect bolts so I can buy new weapons, the controller rumbles, letting me feel the metal currency surge into Ratchet’s pockets. When Ratchet and Clank come across a nightclub in the course of their latest adventure, I can hear the dubstep music playing through my speakers, but I can also feel the beat of the music pulsing through my controller. These vibrations are often subtle, but grounding. They keep me focused on the game, helping me visualize what my character is doing even if my eyes wander somewhere else.

The DualSense’s most powerful features are its adaptive triggers, and of course, Ratchet & Clank: Rift Apart makes use of these as well. The game’s massive arsenal of weaponry takes advantage of this system to create some truly bizarre combinations. There’s a shotgun that can fire one barrel or two depending on how hard I pull the trigger. There’s a seeker-missile weapon where a half-pull locks onto my target and a full pull launches it. One particularly interesting weapon is a shotgun/shield hybrid. Holding the trigger halfway will create a shield in front of either Ratchet or Rivet, but pulling the trigger the rest of the way will cause the shield to erupt forward, damaging enemies.

The triggers help me control every weapon I have. Sometimes, the adaptive triggers drastically change how I use my weapon, while other times a half-pull will just let me aim without pulling the left trigger, helping me land my shots on Dr. Nefarious’ baddies no matter what kind of situation I’m in.

Moments after the parade for our heroes starts, Rift Apart reveals the game’s primary gimmick, which is right there in the name: rifts. Ratchet and Clank get sucked into a new dimension by Dr. Nefarious, and most of the game takes place there. But Nefarious broke time and space in the process, so rifts to other dimensions pop up on every planet.

Dr. Nefarious uses some of these rifts to spawn enemies, but luckily, the game’s heroes can use rifts to reach new areas. This effect is almost like a grappling hook, but it doesn’t pull Ratchet toward an anchor. Instead of pulling Ratchet or Rivet to a point, I’m pulling the point towards the hero — warping the world around them to further explore a planet or get us out of danger. It’s an effect unlike anything I’ve ever seen before. It’s a bit dizzying, but extremely impressive, and it never loses that “wow” factor.

Ratchet & Clank: Rift Apart provides a taste of the PlayStation 5’s power. But the game’s story and themes cement it as a more contemporary title. Rivet and Ratchet are two sides of the same whole, one who rose to become a hero because they met a friend, and the other rising to lead a resistance and disrupt an empire all on her own.

Ratchet & Clank games have always poked fun at consumerism, capitalism, and corporate culture, but Rift Apart takes on totalitarianism and even the complexities of found-family dynamics. The story begins with Ratchet not only questioning if he’s deserving of a heroic parade, but also his feelings of anxiety around disappointing the biological family he’s never met. Then, the first time we see Rivet, she’s sneaking through an all-robot city, risking her neck to steal intel and save the life of an organic citizen. It’s a more emotional game than previous entries, saddled with old baggage and familiar problems for characters to try and understand. Rivet herself is also a harbinger of a new age, finally giving Ratchet & Clank fans a female voice in a series dominated by mostly male characters. It’s a new era for Ratchet & Clank, even if its core structure remains the same.

Ratchet & Clank: Rift Apart works on multiple levels. It’s an extremely impressive piece of software, designed to show off what Sony’s latest console can do. But more importantly, it’s a great entry in a nearly two-decade-old franchise, offering fans more wacky weapons, clever writing, and fresh biomes to explore. Rift Apart is an easy recommendation for any player lucky enough to get their hands on a PS5, for fans who can’t get enough of Insomniac’s heroic Lombax and his charming robot friend, and for players who want to meet a brave, new Lombax and go on an adventure with her, too.

Ratchet & Clank: Rift Apart will be released June 11 on PlayStation 5. The game was reviewed using a PS5 download code provided by Insomniac Games and PlayStation Studios. Vox Media has affiliate partnerships. These do not influence editorial content, though Vox Media may earn commissions for products purchased via affiliate links. You can find additional information about Polygon’s ethics policy here.