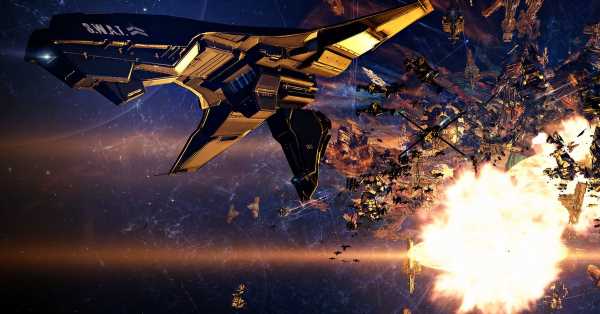 A massive war in Eve Online has been raging for the better part of seven months now, breaking records both for the most players involved in a single battle and, this past week, for the most destruction wrought in the game’s 18-year history. On Saturday, thousands of players went at it again — only to find that the game’s infrastructure simply wasn’t able to support the fight.

This past weekend, more than 13,700 players showed up to fight — more than the game’s previous record-breaking peak of 6,557. When the majority of those players attempted to come together in the same star system to engage in the actual battle, Eve effectively stopped functioning as intended. In a blog post late Monday night, developer CCP Games said it simply cannot predict the stability of its virtual battlefields for engagements of this scale.

“These numbers are unrivaled,” wrote CCP in its blog post, “and unrivaled numbers […] lead to uncharted territories when it comes to performance. Neither side of the war, or CCP, can, could or will be able to predict the server performance in these kinds of situations.”

That has left leaders on both sides of the conflict scrambling for new strategies.

Titans explode over a starbase during the massacre known as M2-XFE Round 2.
Image: Razorien/CCP Games

World War Bee 2, as players have come to call it, began in July. It pits a massive, newly-formed coalition known as PAPI against the established power of the Imperium. At the Imperium’s heart is the Goonswarm, a powerful group of players with more than a decade of experience, led by the notorious Alex “The Mittani” Gianturco. PAPI’s leader, a player known in-game as Vily, told Polygon in October that theirs is a war of extermination, and that his forces will stop at nothing short of the destruction of Mittani’s Imperium. Goonswarm has, predictably, vowed to fight to the death.

For months now, both sides have been trying to draw the other onto the field for a climactic battle. On Dec. 30 — just days after a Christmas truce was ended — both sides finally committed their fleets. The location was a previously unimportant system, a cluster of planets within the Imperium’s home territory known as M2-XFE.

“The biggest fights in Eve Online are the unexpected ones that escalate out of control,” said David “Matterall” Mora, who runs the Talking in Stations podcast and Twitch stream, in an interview with Polygon on Monday. “The planned ones almost never become huge, because one team says, ‘I can see what’s going on, and […] I don’t like the field, I’m backing out.’

“Both teams have to feel like they have the advantage,” Mora continued, “and usually that comes because somebody has made a mistake.”

The resulting battle would span two real-world days. While analysts like Mora can go on about the tiny slip ups that were made, by and large the Dec. 30 engagement at M2-XFE was a solid, stand-up fight. According to a news release issued by CCP on Monday, the outcome was the most costly battle in Eve history. Of the more than 1,200 player-owned Titan ships that showed up to the fight, more than 250 were destroyed — the real-world equivalent of more than $340,000.

The previous record for Titans destroyed in a single engagement was 75.

According to numbers shared with Polygon by the Imperium, the final tally of Titans killed — with 130 lost on the PAPI side, and 127 of Imperium’s Titans destroyed — makes the engagement seem like a draw. But, with New Year’s Eve looming and Eve’s servers restarting for scheduled maintenance, PAPI elected to log its forces out of the game. That left its remaining ships stranded on the battlefield.

That’s when the Imperium sounded the alarm. Two days later, when PAPI returned with fresh troops to rescue the forces it had left behind, more than 4,000 members of Goonswarm were waiting for them. As a result, according to CCP, “approximately 35% of all online pilots in the game were situated” in or near M2-XFE for a second battle — a total of at least 13,770 player accounts.

When PAPI made the call to warp its fleets in on Saturday, everything fell apart.

“Both during and after the fight, players experienced things that don’t happen under normal circumstances,” CCP said in its blog post. “Things like ships disappearing, ships reappearing, ships not appearing in the right systems — even after going through the jump tunnel.”

Speaking with players and observers who were there, Polygon has learned that some PAPI ships that launched from their staging area fully armed showed up in M2-XFE without any of their weapons or defensive systems, some even without their players to control them. What should have been a massive influx of heavily-armed ships was instead a slow trickle of so-called “ghost titans,” which were quickly destroyed by Imperium forces.

A player ship backlit by the distant explosion of a titan during M2-XFE Round 2.
Image: Razorien/CCP Games

According to observers, including Talking In Station’s Mora, Imperium killed some 165 PAPI titans. Of those of those 165 kills, 90 of those ships mysteriously reappeared, safe and sound, back outside the battlefield in a neighboring star system.

CCP said in its blog post that it would not be reimbursing players for losses incurred by its servers being unable to handle the load.

“It is our policy to not get involved with fleet fights, and that policy has been upheld during this war — for both sides,” CCP wrote. “We will be intervening as little as possible in the repercussions of this battle. We will not be taking away any insurance payouts for ships that are still alive, removing looted duplicated modules, or going into hangars to destroy ghost titans that survived. We will only consider moving players who are completely unable to log into the game, if there are any such cases. Players that can log into the game will have to move themselves.”

Leaders on both sides of the conflict tell Polygon that they begrudgingly accept this outcome. Eve is unique for a number of reasons, and with that novelty comes quirks such as these. However, this second battle at M2-XFE — Round 2, as it’s being dubbed — could have been the end of this long-running conflict. The engagement could have broken the back of one side or the other, and ushered in a new era for the epic spacefaring game.

Instead, leaders of the two warring factions are now challenged to go back to the drawing board.

“We have to play the game in a more boring manner, unfortunately,” said Vince Draken, one of the leaders in the PAPI coalition, in an interview with Polygon on Tuesday. “[CCP has] never came out and said, ‘We can’t guarantee [performance].’ They’ve mentioned stuff when nodes crashed and this and that, but they’ve never published an article before that says that basically says, ‘You can’t do what you’re trying to do.’”

As the battle raged on Saturday, Asher Elias — a leader for the Imperium — appeared on the Talking in Station Twitch stream to give his side of the story.

“From my perspective, it’s just disappointing,” he said. “I wish we could have had the fight.”

As it stands today, there is still an unknown number of PAPI ships sitting in M2-XFE effectively trapped and unable to be rescued. Asher told Polygon in an interview on Monday he considers that a win for his side.

But should PAPI have even made the decision to start a fight with twice as many players as the maximum number that Eve Online has ever been able to handle before?

“Given my experience of these fights, no,” said PAPI leader Vince Draken. “Everybody knows that there is a risk that this game, that it is unpredictable. […] To try and put 12,000 people in there — gosh, how can I put this — it was a risk.”

Polygon has reached out to CCP Games for additional comment.