Playing Oddworld: Soulstorm is as arduous as Abe’s quest to liberate his Mudoken brethren from slavery. Each step is a supreme test of patience as you methodically guide your followers through challenging hazards, sweating over the fact that one slip-up could unravel all your effort. If you enjoy putting up with that old-school challenge, you might love this journey. However, if you’re a newcomer or a fan that believes this style of platformer hasn’t aged very well, turn back now. Soulstorm doesn’t do enough to modernize the series’ tedious gameplay, and a litany of severe technical hiccups spoil Abe’s attempted comeback.

A reimagining of Oddworld: Abe’s Exoddus, Soulstorm’s gameplay remains largely the same: you recruit and guide followers through 2D platforming stages littered with dangers. As charming as the classic Oddworld games are, they can be frustratingly difficult and that hasn’t changed much in Soulstorm. Most Slig enemies and other hazards mow Abe down instantly, and I was infuriated by how little wiggle room I had to correct course when things went sideways. Abe drops so fast that it makes the health meter seem like a cruel tease. While playing Soulstorm, I often felt like I was walking on eggshells because of that high price of failure, retracing every step, re-recruiting every Mudokon, and carefully guiding them through a gauntlet of foes is soul-crushing when it all falls apart in seconds. Dying to unexpected perils, like being suddenly gunned down by off-screen enemies, feels cheap and happens way too often.

A crafting system serves as Soulstorm’s biggest addition, but it doesn’t feel necessary. You must repeatedly gather the same ingredients every time you die (by searching lockers, trash cans, and fallen foes), which wore me down in a hurry after repeatedly replaying certain sections. The crafted tools themselves, like proximity mines, smoke screens, even a flamethrower, do add a welcomed element of flexibility and improvisation to gameplay. Dropping smoke screens to create hiding spots anywhere is nice, but I wished I didn’t have to make these items myself and grew tired of digging around the same spots over and over.

Even when Soulstorm’s difficulty eases up, the gameplay is bland. The action feels largely the same from previous games in the series, and that formula doesn’t evolve significantly beyond the first few hours. Even the more interesting sequences, like facing down a giant mech aboard a speeding train, are far too punishing to be fun. I’m glad that Abe controls better now (he even has a double jump), but the controls still have a mushy unresponsiveness that makes entertaining actions, like possessing Sligs, feel like a hassle. The controls also lead to additional deaths because Abe doesn’t act as swiftly as you need him to, especially during the ill-fitting, overly demanding combat arenas that pit you against waves of baddies while you try to protect fleeing Mudokens. 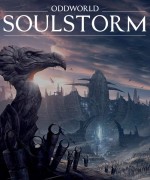 Soulstorm retains the series' signature charm, but it's not enough to forgive its tedious and dated design as well its litany of swear-inducing technical issues.