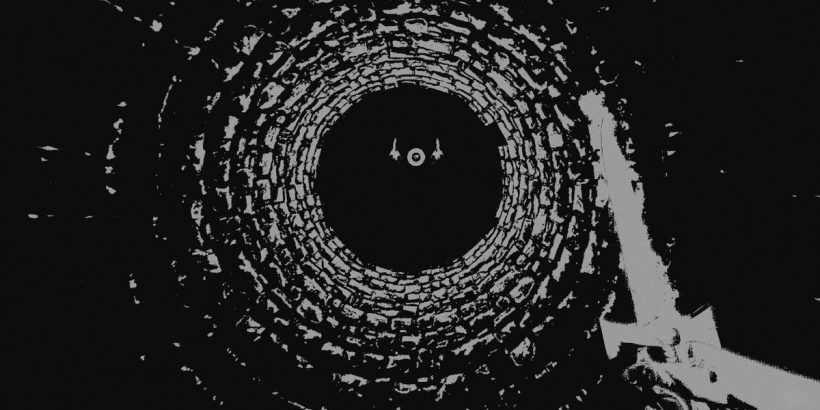 A sword hovers a few feet in front of you, calling out from the pitch-black void. It sings like a hymn as you draw closer; it radiates like a condensed sun. In thick, gothic typeface the game tells you, “Light is my Sword, Darkness shall perish.” You collect the blade and there’s a blinding flash of white light as you’re thrown directly into Nix Umbra’s monochromatic hellscape.

The first moments of a Nix Umbra run are all too quiet. The faint melody of your sword is instantly replaced by the deadening hum of a cursed forest. Your weapon gives off a faint aura, allowing you the small mercy of seeing a few feet in front of you as you helplessly stumble in the dark. Raising the sword casts a blazing beam of light, illuminating the various creatures of the night. But this action also saps you of your energy and the solar icon at the bottom right of the screen slowly drains away. Once the sword is exhausted, so are you — the game ends. “Memento Mori,” the death screen tells you. Death is inevitable here. The only question is: How long can you last, and do you have the courage to try again?

Your first few runs of Nix Umbra are unlikely to last more than a minute. Death is quick, and often unexpected. The goal is to last as long as you can, creeping through the night and fending off attackers as they seek to overwhelm you. The typical rhythm of any one run is bouncy — a minute or so of relative solitude, fumbling in the inky darkness, and then suddenly an overwhelming sensory onslaught that’s likely to end things then and there. After dying, you’re given a score and a position on the online leaderboard based on how long you lasted. You can also, once you’ve played enough, unlock other monochrome color schemes (changing things from default black and white to eerie green or ghostly blue).

A lot of horror games begin in darkness, but few are so comfortable wallowing in it for their entire duration. Usually, even the most opaque games open up, pulling you back into the light to slowly introduce mechanics and drip-feed you context and information. There’ll be tutorials, tooltips, codexes, and an easily accessible wiki page. But Nix Umbra thrives in the dark. Like the early stages of a FromSoftware game, it feels entirely inscrutable. Where are you? What do you do? How does any of this work? With Nix Umbra things never really become any clearer.

Describing Nix Umbra feels a bit like trying to capture the essence of horror itself — tricky, if not altogether impossible. Its closest cousin in terms of mechanics and genre is probably 2014’s cult classic Devil Daggers, another lo-fi, endless-run, first-person game with demonic sensibilities and a blood-curdling soundscape. It also feels reminiscent of several cult horror films — Häxan, The Seventh Seal, and even A Field in England, all of which are similarly monochromatic, and deal with witchcraft, death and psychedelia, respectively.

The most important thing to know about Nix Umbra is that it is genuinely eerie, and often outright horrifying. Playing it makes my hair stand on end, my bones tingle, my skin turn to goose pimples. Its enchanted forest is a place of primordial danger. Vaporous shapes flit at the edge of your vision, darting between indistinct trees and rock. It’s a game of sensory deprivation. Limited vision means you’re literally unable to see the forest for the trees. It’s so dark that you’ll often back up into a trunk, setting the tree ablaze, which drains a chunk of your hit points, but also offers a temporary safe haven.

Extreme darkness forces you to hone in on the woods’ distinctly cursed sounds. The forest’s primal thuds and rumbling white noise gives way to various stalking presences. Floating skulls shriek, birds dive bomb, and spindly spiders — beady eyes tracking you from the tree line — eventually scuttle forward accompanied by the sound of nails on chalkboard. The longer you survive, the more these sounds seem to ascend toward some kind of hellish crescendo.

In keeping with the game’s opaque nature, the function of most items is a complete mystery. Find a floating rose somewhere in the unmappable wood and stare at it long enough, and your vision warps, twisting into a kaleidoscopic pattern. There are mushrooms on the forest floor that, when picked, corrupt the screen, but also increase your speed, allowing you to outrun the shadows nipping at your heels. There are little crystals you can collect, powering up your sun icon, and eventually allowing you to choose an upgrade: ring, boots, fairy, frog? Don’t expect to be told what any of these do beforehand. Sometimes, for reasons still unknown, you’ll be caught in the gravity of some horrific presence, and lifted up toward the sky, ascending through a ring of praying skeletons. In another strange moment, the entire world can be turned upside down in a bizarre out-of-body experience — suddenly you’re forced to play the rest of the game staring up at the ground and down at the sky.

Fourteen minutes into a run, and the entire forest begins to shake. I still don’t know what any of this really means, or what many of the game’s constituent parts do. Despite the fact it features high scores and online leaderboards, the idea of any mechanical efficiency or an “optimal” run seems like an alien concept. I’m not sure if anyone but Nix Umbra’s solo developer really knows how all of it works. In this respect, it’s as close as a game can get to being a genuine occult artifact.

There’s a powerful allure to this kind of obfuscation. Some of my fondest gaming memories have come out of the process of struggling to understand worlds and systems. Nix Umbra isn’t difficult — combat is won via a swift, singular button press. But it is a struggle, in that its world is confusing, its monsters cryptic, and the ultimate goal or meaning, if there is any at all, is obscured behind the thickest of veils. So often we have games about strange, dark, magical places, where all the weirdness and mystery is instantly obliterated by open, over-explained structures. But, so often, the enigma ends up being just a pretty wrapper. It feels like Nix Umbra refuses to be pinned down or overly systemized in this same way. Instead of evaporating under a harsh light, its occult qualities are allowed to flourish in the dark.

Nix Umbra understands that horror is most potent when it remains inscrutable. Like cosmic horror, it is amorphous in shape, as indistinct as a dream, and near impossible to pin down. Playing Nix Umbra, surviving a few minutes at a time and trying to piece together its many mysteries, is as close as video games come to feeling numinous. It feels as though there’s some deep, phantasmal truth lying just out of reach, perhaps at the edge of the tree line, or somewhere in the forest’s shadowy margins. One more run and surely I’ll be able to reach out and touch whatever that is?

Nix Umbra was released on Nov. 19 on Windows PC. The game was reviewed on Windows PC using a pre-release download code provided by ilzard. Vox Media has affiliate partnerships. These do not influence editorial content, though Vox Media may earn commissions for products purchased via affiliate links. You can find additional information about Polygon’s ethics policy here.