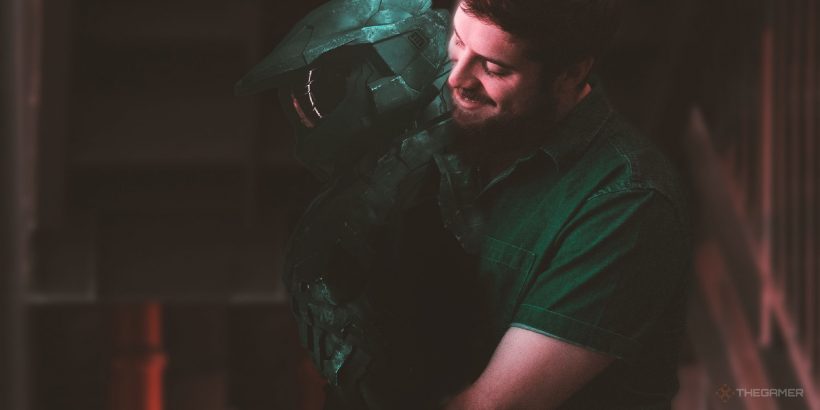 Master Chief has probably never had a holiday. Think about that, the weathered space marine hasn’t experienced the pleasure of popping to Butlins or even a brief trip to Disneyland Paris on the Eurostar. You haven’t lived until you’ve done one of those, preferably both.

His whole existence is defined by conflict, an upbringing that saw him morphed into an immovable object of aggression that lived to fight for humanity and little else. For decades he has fought against endless waves of enemies, obeying orders regardless of how much danger he happens to throw himself into. The indoctrination that defines so much of his personality is impossible to circumvent – he needs a fight to finish, a race to save, and an assault rifle in his hands to maintain a semblance of being. He also needs a break – and a good long cuddle. As you can see from the above image, he’s also a little spoon.

Halo Infinite dissects Master Chief’s character in such a meaningful way, willing to examine the problematic nature of the Spartan programme that birthed him and how, after all these years, he is on the verge of giving up. After failing to protect Cortana and awakening from slumber six months after humanity lost the war it fought so hard to win, his only course of action is to pick up a gun and march towards his adversaries. Chief is outmatched, outgunned, and outwitted by The Banished, yet he’s determined to take back Zeta Halo and leave this place with more honour than when he arrived. It’s a vicious, perpetual cycle doomed to inevitable tragedy. His character arc throughout Infinite can easily be interpreted as a tale of grief and rejection. The passing of Cortana forces our hero to confront his own emotions for the first time, contemplating what it means to lose one of the only people you've ever been close to. Even if it happened to be a genocidal computer programme, she was still family, a loved one who saw Master Chief as more than a tool built for combat. When she perishes alongside a necessity to fight, John needs to reassess his own mortality, and chooses to help the few people in this world who still need him.

Infinite’s miniscule cast is its greatest strength. 343 Industries doesn’t make the previous mistake of drowning us in lore and exposition, even if I adore an appreciation of the series’ wider universe. It’s the exact opposite, with Master Chief, The Weapon, and The Pilot being the only main characters we ever encounter. Sure, we’ve got the usual assortment of villains, but these baddies act as window dressing for the wider conflict instead of planting themselves into memory. I knew they’d fade away before the campaign’s end, crushed beneath a Spartan’s boot as we took this ring back from those who dared use it for evil means. Yet Chief also treats their passing with respect, noting how they are simply soldiers fighting for an ideology they believe to be right, much like he has many times before. He even gets a cuddle towards the campaign’s conclusion, The Pilot throwing himself into Chief’s arms once his life is saved from certain oblivion. John is still predictably stoic, simply allowing the hug to happen instead of reciprocating in some way, that and his arms wrapping around a mere human would probably crush their bones to pieces. The fact he’s willing to receive one in the first place is such a poignant moment for his character, a sign of intimate vulnerability that was normally buried beneath mountains of generic one-liners and a self-insert we’ve seen this genre produce time and time again. When The Pilot is taken hostage Chief springs into action, doing everything he can to save him and stop The Banished for good. He doesn’t care about his own demise, he’s lost enough and seeing one more body added to the pile feels like too much of a sacrifice, a death he can prevent unlike that of Cortana or all those lost in the war he hasn’t awakened to lose.

Master Chief feels like a human being for the first time in 20 years, which is an achievement in narrative storytelling that 343 Industries should rightfully celebrate. Being a faceless marine with no personality and no flaws to recognise makes them boring. Heroes who have saved the world, been through hell, and developed knowable trauma as a result can be deconstructed and examined in so many ways, pieced back together in a form that makes them stronger than ever. Chief is still fittingly silent, only responding to conversations when the moment seems right or when he truly has something today. But his silence also speaks volumes, especially when he’s putting himself in harm’s way or executing humanistic gestures for the safety of those around him. I suppose when you’ve got nothing left to lose, the wellbeing of those who do becomes even more apparent, and Halo Infinite is a beautiful exploration of learning to recognise the value of what remains, and how such things are always worth fighting for. I’m not sure where Halo will go from here, but it establishes a foundation for Master Chief and company where the potential is almost limitless. I just hope before the next game he’s able to settle down for a good cuddle session, or least take time for a weekend break at Center Parcs.