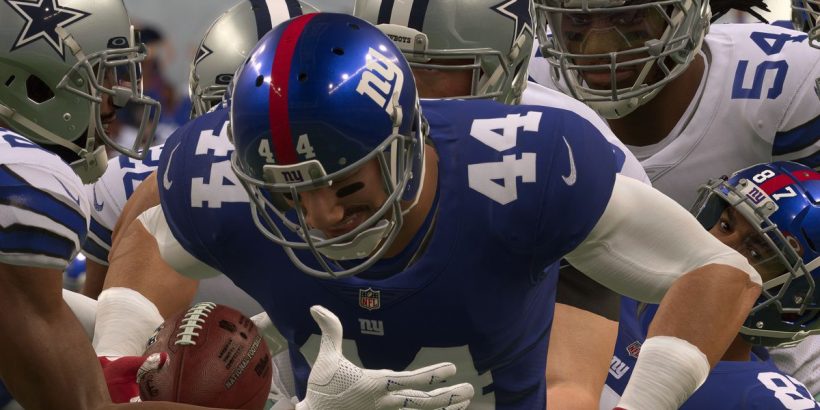 Early in my newspaper career, when I had to do a little bit of everything to get the paper out, and did little of it with much expertise, I remember the feeling of Christmas-morning joy at finding that I had actually shot a sports photograph worth running at four columns wide, vertical, on the section front.

Digital photography, the ability to shoot unlimited images from a high school football game, and to see each one the instant after it’s snapped, has robbed a lot of shutterbugs of that unique feeling of good fortune. But it’s exactly the one I recall when I go into the postgame highlights that Madden NFL 21 saves for me and come out with half a dozen Sports Illustrated-worthy still frames that I almost have no right to claim.

Jean Adams, the senior art director for EA Sports’ Madden NFL series, says he and other developers also come away with that same giddy feeling of satisfaction, even after games they play just for themselves. And those moments have come a lot more frequently since Madden made the leap to new console hardware.

“It’s almost like the thousand little things that we do that sometimes consumers don’t see,” Adams said. “Like, when someone is driving down the sideline, and our characters are properly head-tracking that athlete, so they look alive, they look intense. When people capture those little nuances, they make the game feel less digital. It feels like a believable moment.”

In gameplay, the hyper-criticized Madden NFL series gained the most among the sports titles making the jump to the new consoles that launched in November. But Adams is right that the improved visuals are often taken for granted — if not by regular players, then by reviewers like myself.

Only in restarting my single-player career after the Super Bowl ended, and picking through the replays and highlights, have I understood just how much Madden NFL 21 also gained from the lighting, the resolution, and the detail that the PlayStation 5 and Xbox Series X can fully showcase. The upgrade has elevated the game’s photo mode to one of the best in its class, an honor that usually goes to the likes of NBA 2K or a motorsports title. After each game, I linger for upwards of half an hour on the big plays the CPU saves for me, finding the perfect shot to tell the story of my created player at this point in his season.

“Everything we’re trying to do is deliver a larger-than-life experience,” said Chen Hsieh, an EA Tiburon art director whose job with Madden NFL 21 involved developing the code that applies the game’s new lighting. Photo mode really calls out Hsieh’s work; the camera “lens” has to adapt as users zoom in or out, or change their angle, either bringing in more light as an on-screen player moves out of the way, or dimming it as they obstruct its source. And the detail Chen’s lighting exposes really has to pop.

“Probably the most significant update on [the newest console generation] was super-rendering,” Chen said. “What does that mean? It means we can add way more light sources, casting light and shadows for in-game play, that we’ve never been able to achieve before. And it applies to the players on the field as well as the sideline features, and players, etc.”

The player character takes on a more sculpted look, Chen said, saying that’s the internal term for the instant where a player transitions from “being online” — another studio term, meaning recognizably just a piece of video game art — to looking photorealistic. “What we use, how we code it, the player ends up being formed in a much better way than we ever accomplished before. We kind of [did], depending on the lighting, and camera angles, but it was never stable.”

Depth-of-field effects, and strong contrast, help the complex action of a full-contact sport pop right out of the frame.
Image: EA Tiburon/Electronic Arts via Polygon

For several great examples, see the thread on the Operation Sports forums called “The Photographic Side of Madden” — notice the magazine quality of the images posted after Madden NFL 21’s launch on Xbox Series X on Nov. 10. The ones before aren’t bad, but they are “flatter,” a word I’d commonly hear from colleagues on the photo desk to describe a low-contrast image that didn’t call enough attention to the action in the frame.

“I always go to the right time of the day, or night,” to get a beauty shot, Adams said. “By the way, on [PS5/Xbox Series X], nighttime looks a thousand times better than it did on [PlayStation 4/Xbox One]. But for me, I like dusk, I like lens flares, I use a lot of those elements in the background when I take screenshots and share them with marketing, or for release.”

This isn’t to say that every frame in Madden NFL 21 is suddenly gem-quality. If you pick through replays enough, you’ll find a lot of stock animations that end up repeating the same pose, or moments where a tackler clips through a teammate or a ball carrier’s limb. Such things are understandable given the complexities of animating a full-contact sport among 22 players. A player caught in a change of direction, or in a collision that calls on real-time physics to alter a canned animation, are usually the money shots, and can typically be rotated or angled to obscure immersion-breaking imperfections.

Adams said Madden’s photo mode does somewhat pressure the animation side of development, so that players don’t notice too much repetition or stock footage as they frame the game’s decisive score or quarterback sack.

Here I rotated the camera so that the clipping of linebacker Krys Barnes’ hands and arms, through my running back’s upper body, was not as noticeable.
Image: EA Tiburon/Electronic Arts via Polygon

“There’s always a debate that we have internally about photo mode, and giving the user the ability to completely fly around and see some of those imperfections,” Adams said. “But we think there’s value in giving the user the ability to capture their moments, celebrate them, and share them. There’s always that balance of, How much do we allow the users to go in and kind of nitpick, or see that there might be some interaction that isn’t perfect? But we’re always striving to perfect the animation.”

Adams said “there’s a lot of cool stuff happening that we probably can’t talk about right now” regarding what photo mode capabilities Madden NFL 22 will expand upon and deliver this summer. One nitpicky suggestion: In Franchise, the CPU’s auto-saved photos for some reason capture the frame right as a flash effect plays, blowing out the image. It’s amusing, but man, that needs to be fixed in Franchise’s news feed.

And Adams knows that players miss the community-shared screenshots that developers would put into the loading screens between games. There’s a reason they’ve gone missing on PS5 and Xbox Series X: “Because […] loading times are so fast!” Adams said. “It was sub-two seconds in some cases. It almost seemed like a glitch: A screenshot would pop in and pop out. But it’s a good point, right? Like, we should figure out a place to celebrate all that stuff, like we used to have.”

After all, Chen and Adams are fans, too; they’ve built sophisticated lighting and tools because they want to apply them to the players they’re steering through a virtual NFL season with their favorite teams. They’re also hunting for the perfect shot, and are as delighted as we are when they get it.

“Sometimes, it’s just in the facial animation,” Adams mused, “when you catch the right grimace. The intensity of the shot goes from digital to, like, believable. It’s not just the interactions of the tackles, and the catches. We’ve done the hurdles, or the momentum shifts, you know, those always look great. But once you add that layer of the right facial animation, I’ll spend an hour just flying around that moment, trying to get it to come alive.”

Roster File is Polygon’s column on the intersection of sports and video games.