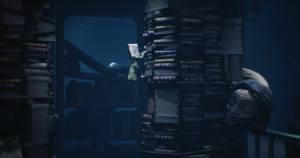 Having loved the first horror game, we were very excited to get out hands on this scary platformer sequel.

The Little Nightmares series is all about what it would be like to survive little children’s bad dreams.

And this game doesn’t let fans down.

It’s a freaky edge-of-your-seat scare-fest from start to finish.

Your nerves will be shattered as you try to run, hide and battle your way through a dark dreamworld full of horrid looking monsters.

One where all the adults are ghoulish creatures and your two protagonist kids are far too small, thin and powerless to do much but run away.

Where the first game was all about the little yellow raincoated character of Six, this one sees you play a little kid called Mono.

Mono starts the game wearing a cardboard box on his head, I’m still not sure why, and it isn’t long before he discovers Six hiding, scared, beneath a table.

You hook up and are soon running for your lives from a shotgun carrying beast of an ‘adult’ creature, working together to overcome puzzle-based hurdles.

It’s raised hair on the back of your neck stuff, and you’ll find yourself in a permanent state of stress and panic as you play this game.

The developers have done a sterling job building an uninviting, nightmare looking harsh backdrop of a place. One where everything seems a little off kilter and the jump scares – when they do hit – make you run for your life in a fit of anxiety.

The gameplay is simplistic, think platformers like Limbo and Unravel and you’re basically there, but with the expertly realised world and amazing sound and visuals, it all works together brilliantly to deliver a game above and beyond the norm.

It’s a shame you can’t play as both characters – Six is computer controlled – but the clever work-together mechanics show an improvement on the previous game.

And while the puzzles can be tricky and resolutions are never easily signposted, you’ll have great fun slowly working your way through the tougher, more intense elements of this game to unveil ever-more details around what’s really going on in this dark world.

It’s much longer than the first game too, so you feel like you’re getting more bang for your buck. Although one downside is there isn’t a huge amount of replayability in the longer term.