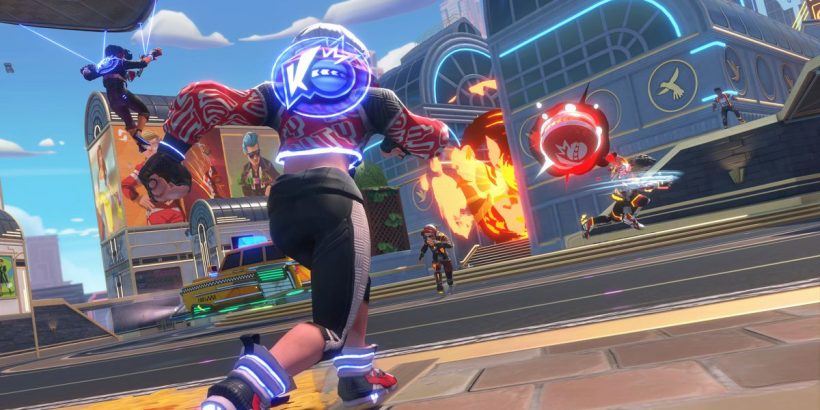 Teamwork is essential to Knockout City; after two preview betas, that much I already knew. But in my last few hours with the dodgeball-as-a-sport multiplayer game before it launches on Friday, I realized there might be such a thing as too much teamwork.

It’s refreshing to see a game rely so much on cooperative play right off the bat, among people with whom I am not communicating with over voice chat. And it’s remarkable that this happens in a sports-style game whose fundamentals and tactics are largely unknown to everyone. Credit a well-balanced design from Velan Studios, whose developers have built a game that doesn’t just suggest that folks work together — it genuinely makes that easier.

But as an example of how those tools might facilitate too much cooperation, I present the Party Team KO playlist, shown to a group of reviewers and influencers on May 18. Like nearly all gametypes in Knockout City, this involves teams of three players roaming a zany, futuristic map, hunting for red rubber dodgeballs to fling at the other side. The first team to 10 eliminations wins.

In Party Team KO, all the balls are special balls — variants that explode, ensnare opponents, or grant multiple shots. Nothing wrong with that. But when a teammate rolls themself into a ball and runs into you, that overrides the weapon you’re holding. You drop that ball and pick your teammate up, and you can throw them instead.

Ordinarily, this is a good thing. Thwacking someone with a teammate is a one-hit elimination, and it takes three standard hits to put someone out otherwise. But when I have a Bomb Ball, whose explosion is an instant KO, and I’m ready to toss it at someone who is caught out in an open area, it’s very frustrating to have my shot interrupted by a helpful teammate doing what they should — trailing the play, rolling into a ball, and then into me because they had nothing better to do. This is team play that I’ve specifically advocated.

So what am I gonna do? Yell at them? Even if we were in chat together, they were only trying to help.

On the whole, Knockout City is a fun, eminently recommendable game. Velan and Electronic Arts are putting it out to a ready-made audience of millions with few barriers to trying it out. Knockout City is available in a free, full-game 10-day trial (beginning Friday and lasting to May 30) to everyone; it’s part of EA Play’s library at launch, and therefore free to Xbox Game Pass Ultimate subscribers; and it does not require Nintendo Switch Online, for those playing on that platform.

To players flooding into Knockout City at launch, a word of advice: For all the game does to assist you, to take friction out of the actions you have to do quickly, and repeatedly, it is so fast-paced that there will still be moments where you feel like you have no idea what’s going on. Even after pasting the last team in a two-round shutout, I found myself stumbling into ambushes, getting panicky on the controls, caught out in the agora of Rooftop Rumble with my screen turning red and no idea what to do next.

This is partly because aiming and accuracy play secondary roles in either throwing a ball at someone or passing it to a teammate. You’re really only aiming if you’re using the special Sniper Ball, or trying to pick the landing zone when a teammate has charged you up into a super, cannonball-like state. But in regular play, the game uses an auto-targeting system, allowing you to whip a ball into an opponent as fast as you can get the right trigger down and release it. Again: Velan is striving to facilitate things for its players wherever it can.

Charging up a shot is still essential, as that makes it faster, and therefore harder to catch or dodge. A lot of successful Knockout City plays, for me, came down to knowing how long to charge up a shot. At certain close ranges, additional power is unnecessary. But there I was, in close-quarters range, laying on my right trigger out of … instinct? blind faith that a stronger attack is better? … while my unarmed opponent caught a lucky rebound and immediately bullseyed me. Other times, I fired way too early from a longer range, which often ended in my shot getting deflected in midair by someone else’s throw.

In such a fast-paced environment, it’s hard to slow down and focus on the one or two parts of my game that I do well. (Lob shots! Gotta remember to make lob shots!) Unfortunately, that’s just part of sports.

The other back-of-the-mind tingling I have about Knockout City is how little time it takes to feel like I’ve played something meaningful. It’s hard to say that about the big-budget sports titles I favor, where a single game might be the only thing I play that night. But in Knockout City — which supports cross-play and -progression across all platforms — I know I can start up the game, get matchmade, and get through a three-round Team KO event in 10 minutes. If I want to grind against the 99 levels in my tier of progression (there are nine overall), with all their loot awards, I can probably clear five in an hour of not-particularly-skilled play. If I’m winning, it goes faster, especially if I’m checking off Contracts (big XP bonuses for milestones like eliminations and completed matches).

Along the way, I’ll add other dimensions to my game. Faking a throw is a big one; pretty much everyone latches onto the importance of catching a ball to counter the opponent. Those who are a step ahead know how to fake the throw, countering that counter. The counter to that counter is out there somewhere, too. It speaks to the slow, fun burn that Knockout City has been for me since Velan and EA started showing it off in February. There’s a strange new sport out there, whose fundamentals and tactics are largely unknown. If I can discover them faster than the other guy, I’ll have a competitive advantage, right?

Knockout City launches May 21 on Nintendo Switch, PlayStation 4, Windows PC, and Xbox One. The game was reviewed on PC during a pre-launch multiplayer event organized by Electronic Arts. Vox Media has affiliate partnerships. These do not influence editorial content, though Vox Media may earn commissions for products purchased via affiliate links. You can find additional information about Polygon’s ethics policy here.