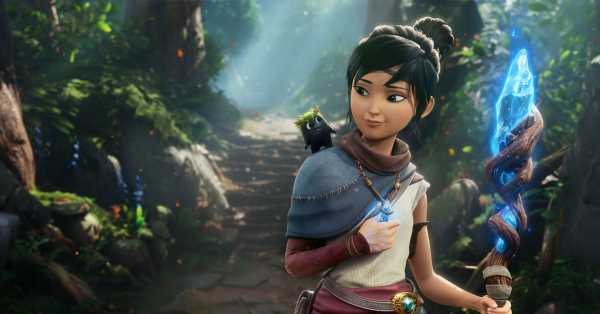 I’m in the midst of another forest meadow. It would be picturesque if not for all the gnarled purple roots strangling the life out of the place, and the fleshy bulbs pulsating a toxic red. As Kena, a spirit guide who travels the land seeking to reunite the dead, usher spirits to the afterlife, and generally put things right, my top priorities are the forested valley and its health. For the most part, this means eliminating all those red nodules that blight the land.

For what’s ostensibly an indie game made by an animation studio crossing over to the realm of video games for the first time, Kena: Bridge of Spirits is a surprisingly slick affair. Movement is swift, platforming is non-aggravating, and the third-person combat is dancelike and bursting with energy. Over the course of the game, you’ll attain a few extra powers — turning your staff into a magical bow and the ability to throw a series of spirit bombs, to name a couple — but the setup for combat largely remains the same throughout. Enter an enclosed arena, kill contorted tree-things, burst the bulbs with a magical pulse, and cleanse the area.

Making things slightly more interesting are Kena’s companions, small creatures known as Rot. These friendly little fellows will dart away from Kena in order to show you the way and highlight interactive objects. There are some lovely details here, with the creatures teleporting into positions of rest, constantly one step ahead of you, atop house furniture and rocks and logs. You’ll accumulate dozens of these Rot over the course of the game, customizing them with funny hats, using them for puzzles, and unlocking a few more combat-related abilities. In a fight, the Rot can be used to pin enemies down — jumping atop a tree guardian’s back and smothering smaller foes — or to infuse a powerful hammer swing, bow shot, or bomb.

They can also assist in exploration: They shift blocks around and rearrange statues to open up hidden areas. They’re also how Kena levels up; the more Rot creatures you find in the world, the more frequently you can use them and their powers in combat. On top of Kena: Bridge of Spirits’ many combat trials and arenas, there are platforming sections with perfectly painted cliff edges, and environmental puzzles that require you to shoot distant targets in sequence, both of which feel like very familiar activities.

With all its verdant forests, glowing mountain shrines, and mossy ruins, it feels like Kena: Bridge of Spirits desperately wants to be a game about the magic and mystery of nature. Unfortunately, the illusion is shattered somewhat by a lack of imagination and the absence of any original identity. Everything from the percussive soundtrack, which continually flitters and quivers, to the Rot spirits themselves, is reminiscent of Studio Ghibli’s work, particularly Princess Mononoke. At the same time, its paper lanterns, animal statues, and torii gates gesture vaguely in the direction of Japan’s Shinto religion.

Adding to this feeling are the game’s many ecological platitudes. Kena: Bridge of Spirits is constantly telling you about its big themes. It’s about “restoring balance” and “letting go.” At one point, a character unironically tells you that “the land has begun to heal.” It’s as simple as a meme, which to me feels faintly condescending.

But then I see all the beautiful animation, the cutesy Rot creatures bouncing after Kena as she runs through more lush overgrowth, the photo mode with its built-in kiss emote. It feels like a game meant for kids, not adults trying to recapture the joy of childhood, like myself. Except it isn’t really — the puzzles are too obtuse, the multistage boss fights too difficult, for that to be the case. Instead, what we have is perfectly fabricated “wholesomeness.” Can you pet the spirit creature? Probably.

Most disappointing of all is how Kena: Bridge of Spirits feels to play. Its combat, puzzles, and exploration are finely tuned and well oiled. But the game rigidly sticks to a formula that we’ve all seen before. You already know the rhythm and flow from countless other games. It’s 2018’s God of War without the gruesome finishing moves. It’s Ghost of Tsushima without the expansive cast of characters. It’s Horizon Zero Dawn without the sprawling scope. The list goes on. And when the formula is such an overwrought entity, how can anything really be magical? There are no real secrets in Kena: Bridge of Spirits, only collectibles. There’s no mystery, either; just more arena combat.

Inspirations should always serve as a jumping-off point, something to build upon. But it often feels less like Kena: Bridge of Spirits was inspired by things, and more like it decided it could squish its beautifully realized world of magic and spirits into a ready-made mold. The result is a thoughtless blend; a hybridized paste. Vibrant and undoubtedly beautiful, Kena: Bridge of Spirits shows us every color in the spectrum. But strangely, it all feels brown — a muddy, grayish brown that comes from having mixed together every color on the palette.

Kena: Bridge of Spirits launches Sept. 21 on PlayStation 5, PlayStation 4, and Windows PC. The game was reviewed on PC using a retail download code provided by Ember Lab. Vox Media has affiliate partnerships. These do not influence editorial content, though Vox Media may earn commissions for products purchased via affiliate links. You can find additional information about Polygon’s ethics policy here.