There’s an uneasiness in Manifold Garden, developer William Chyr’s architectural oasis that shifts and repeats itself into seemingly infinity.

It’s a game I’m drawn to and terrified by, an unsettling yet stunning experience set in an M.C. Escher–inspired world, where each structure is its own puzzle and brings with it a sense of “impossible geometry,” shapes that shouldn’t work, but do. Somehow.

There is no one guiding me through the garden; instruction is built into its design. The first puzzle is a lesson in gravity. A button is dangling from the ceiling, and I have to walk on walls to reach it. To get there, I essentially switch into different dimensional planes, each of which is associated with a color.

Confused yet? It will make sense as you play, but trying to explain what’s going on verbally, or even written out, is a significant challenge.

My expectations of how things are supposed to work are broken down by the game’s mechanics. I have to shift perspective by activating a different plane, which changes my view. And I mean this in a literal sense: With a click, the wall becomes the floor and a new world opens up to explore.

From there, I continue to play with gravity to solve the game’s puzzles. Doing so rids the world of an implied corruption that’s taking over, represented by dark clouds that obscure parts of Manifold Garden’s geometry. I learn more about the world and its story with each new garden I reach, although the specifics are often more implied than explicitly explained. The game can be finished in up to six hours, although time starts to have less meaning the more you dig in.

Manifold Garden isn’t a garden in the traditional sense. Blocks grow like apples from geometric trees dotted across the world, and it’s these blocks that are the keys to the world. The blocks are each associated with a color, depending on what tree they’re pulled from.

The objective is often immediately clear when entering an area: I see the trees, growing their blocks. Elsewhere, there’s a door to unlock, powered by a receptacle where I’m to plug in the correctly colored block. But it’s not as simple as picking up the block and moving it to its gate; blocks are locked to their respective color planes, and I must manipulate gravity to get it where it needs to go. Anyone who enjoyed Portal or Portal 2 may have some understanding of the sort of thinking required to solve Manifold Garden’s puzzles.

Early puzzles are meant to teach me the way the garden works more than challenge me, but puzzles become more complex as Manifold Garden opens up. Just when I think I’ve grasped the logic of the world, something changes — my perspective shifts — and the uneasiness of infinity settles in again.

Manifold Garden invokes a sense of anxiety within me, like a dream I’ve always had and never understood: I’m chasing something through a looping forest, but whatever I’m following — I never know what it is — remains just out of reach.

But the truth of that these environments don’t go on forever. The loops, like the blocks, are tools to help me escape, to interact with the environment and solve puzzles. And the place where my anxiety and the game’s design collide the hardest takes place on the edge of a platform, over which I must throw myself. 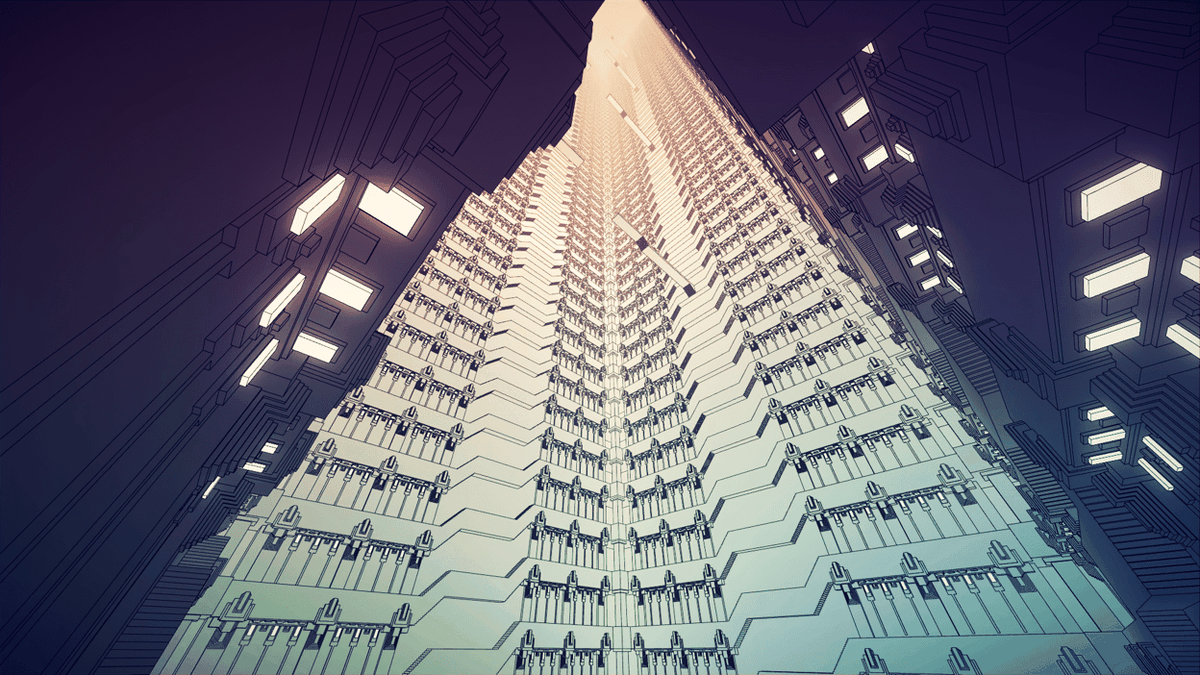 I encountered this lesson early on in an area with Manifold Garden’s never-ending stairs. The stairs loop around a vertical structure that extends forever in both directions; I move up and down the structure in both directions, but I always return to where I started. Then I realize I need to go across the short gap. And I must fall into the void to do so.

And so I jump, or, rather, fall. There is no jump, I can only walk until there is no longer floor. So I fall. I fall past the stairs. I fall, and fall, and fall, until I land right back on the very same platform. Except I’ve shifted to another plane on that structure, which means the stairs are now horizontal, not vertical.

I can finally reach a different area, falling past different variations of the world, controlled by which plane I was on when I pitched myself into nothingness. This isn’t infinity, it’s a tool. When I look into the void, the void doesn’t look back. In this world, the void offers solutions.

The blocks I found and their uses change as I enter more complex areas of Manifold Garden, and later I stumble upon waterfalls, another Escher reference. Manifold Garden is not frustrating or confusing, even if my explanations of what I do in it may be.

Chyr has been working on the game for seven years, and he’s used that time to design a world that challenges its inhabitants without being cruel. I often feel like I have no idea what I’m doing, but I never feel despondent or troubled by that confusion. A breakthrough will come, and the game’s environment itself feels like it wants to be played with and experimented upon.

I’ve just got to be willing to submit myself to Manifold Garden’s infinity.

Manifold Garden was released on Oct. 18 for Windows PC via the Epic Games Store and on Apple Arcade. (It’s coming to PlayStation 4 at a later date.) The game was reviewed on PC using a final “retail” Epic Games Store download code provided by William Chyr Studio and on an iPhone using a personal Apple Arcade subscription. You can find additional information about Polygon’s ethics policy here.