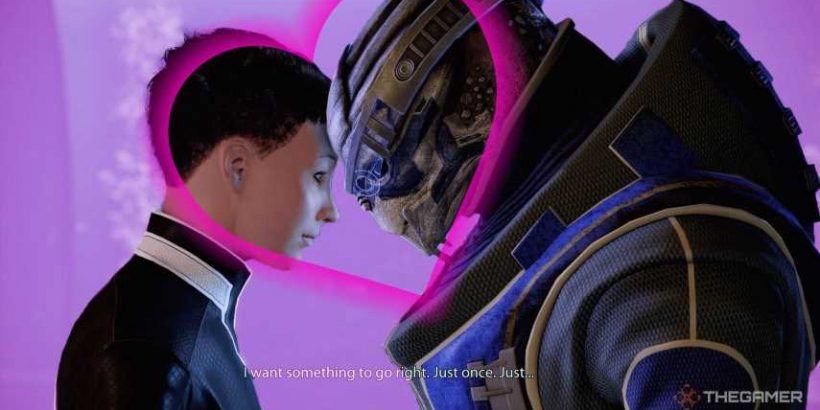 Garrus Vakarian isn’t my main squeeze throughout the Mass Effect trilogy – that honour goes to Liara T’Soni. But when the asari scientist was busy tracking the Shadow Broker and tending to her own worries, a romance blossomed between me and the turian sniper. I’d heard about his dreamy demeanour and loving escapades from friends in the past, but I’d always looked past him, opting for another relationship option aboard the Normandy as he tended to some much-needed calibrations. Seriously, what is with all of these calibrations? The guns work, Garrus! Now come back to my quarters for a drink and check out my sick model ship collection.

But with the launch of Legendary Edition, I decided things would be different, and so I went on a romantic warpath and found myself smitten. The road to pulling Garrus isn’t a conventional one, with the former C-Sec officer being adorably shy about interspecies relationships and becoming an incidental burden to Commander Shepard as she tries to save the galaxy from the Collectors. He requires reassurance, a gentle touch to remind him that it’s okay to confide in people like this when the galaxy around them is threatening to crumble. Like I said – it’s adorable.

I think that’s why I love Garrus Vakarian’s romantic questline in Mass Effect 2, it isn’t depicted as a crude sexual act before the final mission, it’s seen as a real relationship, one where two consenting adults are clumsily fumbling around the acknowledge of feelings before retiring to Shepard’s quarters for a cheeky glass of wine and some flirtatious touching of cheeks. It’s relatively subdued, likely because BioWare wasn’t willing to expose us to turian dong back in 2010. If you’re after a bit of alien nudity, you’ll have to settle with Andromeda or just install some mods, I suppose. 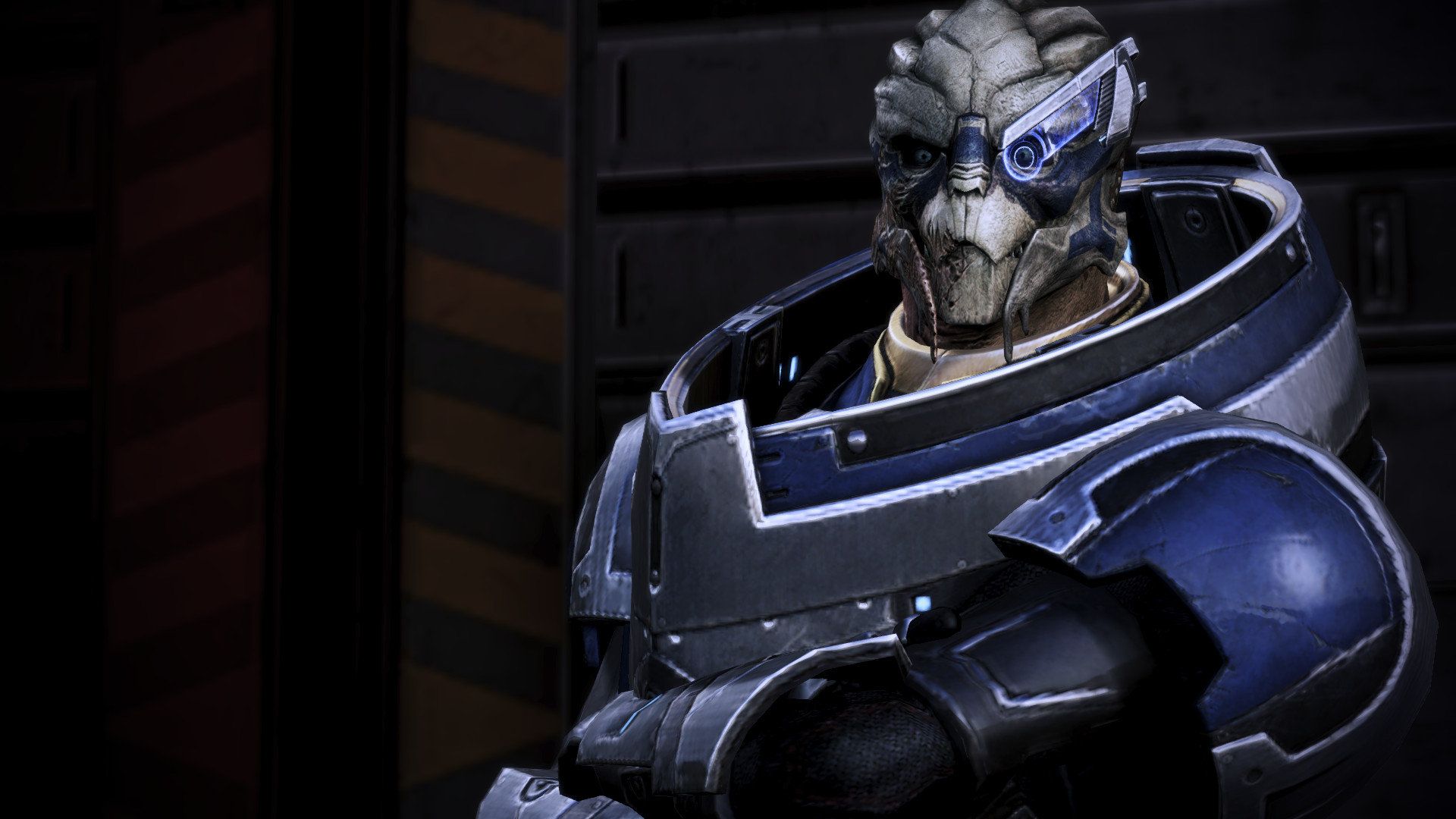 As their romance is solidified the screen fades to black, and we’re met with the Normandy crew preparing for a mission they might never return from. Such bonds in Mass Effect often come as a result of desperation, with partners finding one another amidst dire circumstances where their lives hang in the balance. They could die tomorrow, so losing themselves in the throes of passion one final time makes perfect sense. Some of the dialogue is hamfisted, and the sex scenes are cringeworthy at best, but the honest intent bleeds through, with Liara, Garrus, Miranda, Jack, Thane, and more presenting romantic paths that feel genuine within the context they occupy. It’s only in Mass Effect 3 where such relationships become something more.

Due to my past relationships with Liara and Garrus, both individuals confronted me about our romantic situation as the Reapers began swarming the galaxy. In all likelihood, we are going to die, so my two lovers wanted closure, to know whether we had a future together or if such feelings should be put aside in favour of saving everything we hold dear. As I mentioned earlier, my heart sits with Liara, and I cemented that fact with a cheeky smooch aboard the Normandy as she joined my crew one final time. Garrus wasn’t so lucky, but even in heartbreak, his excellent character writing remains consistent.

Before our bond began to deepen, his hesitation was evident, a worry that Shepard simply wouldn’t want to be with him, or even comprehending such infatuation with another species was strange and unwarranted. Garrus didn’t want to be a distraction to the mission, a fling to indulge in before everything fell apart. Here they both stand, alive, well, and ready to save the galaxy. 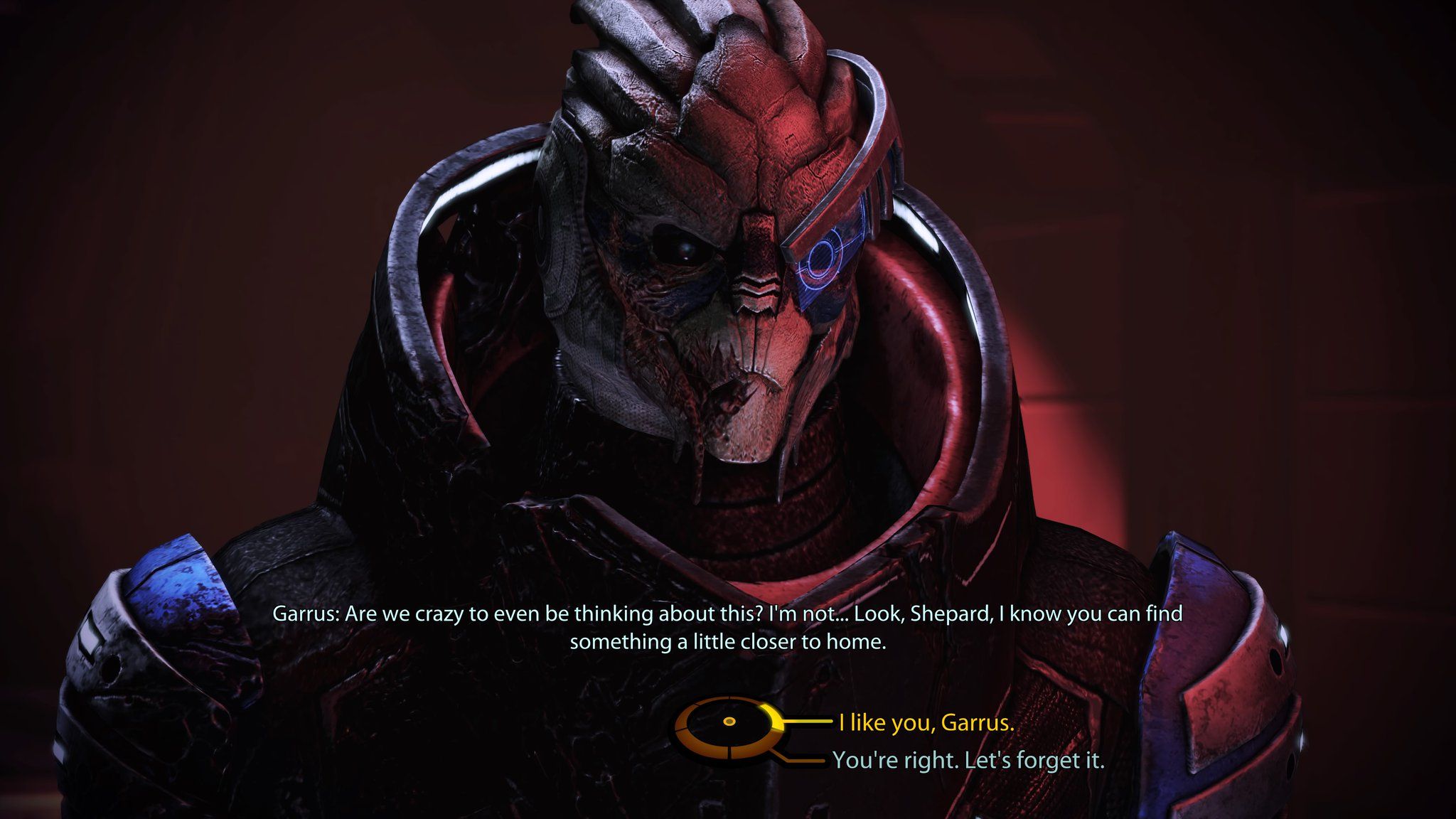 Sadly, the romance wasn’t meant to be, so I let him down gently, sharing a final moment of intimacy before we stepped back as friends, comrades ready to finish the fight. It’s a bittersweet moment, an achingly real example of romantic departure in a franchise that is often distracted by infantile sex scenes and needless buttshots. When it wants to be, it can be wonderfully real, and that’s why I love Garrus Vakarian so much.

Romance in the real world isn’t a sequence of dialogue choices followed by an eternal reward. It’s often an emotional battlefield to navigate, a sea of unpredictable feelings and compromises as you try to understand one another and find happiness in such company. Garrus and Commander Shepard are perhaps the most realistic example of that in Mass Effect. It’s a mutual attraction that builds upon a strong friendship, and when that romance potentially falls away, there aren’t any hard feelings, but instead an understanding that what happened can’t be reversed, and we’re better people for the experience. Garrus Vakarian isn’t a burden, and I appreciate the anxiety he feels and how realistically it portrays the fear of being left behind, of not being good enough for those you admire.

In hindsight, I probably shouldn’t have been seeing two people at once, so it’s totally on me.