The seventh DLC fighter for Super Smash Bros. Ultimate is Steve from Minecraft. The blocky builder comes with three other characters – Alex, Zombie, and Enderman – although all four fighters share the same moveset. Don’t think of them as echoes so much as alternate skins. Masahiro Sakurai shared exactly what Steve and friends can do during a video presentation on October 3. Here, we’ll break it all down.

The most unique thing about Steve’s movement in Super Smash Bros. is that he can’t jump well. Sakurai showed Steve on Battlefield, where he can’t even clear the lower platforms with a single jump. His midair jump is better, however. He also will get some height with blocks, but more on that later.

For regular and smash attacks, Steve uses the various weapons from Minecraft. The sword covers most basic attacks and the powerful side smash. Pickaxes are used for aerials, and can have a pretty nasty meteor effect. The axe shows up for upward-facing attacks, and are great at juggling. Holding down the button will make Steve constantly swing a weapon, allowing for quick buildup of damage. They are all short-range, though, and will break with too much repeated use. When that happens, you’re left with a very weak punch.

For the other smashes and tilts, Steve summons tools and hazards players often encounter in Minecraft. He can set fires on the ground and magma blocks in the air. Both of these last longer than one might think, allowing for great zoning. The down air summons an anvil that drops down like Kirby’s rock. 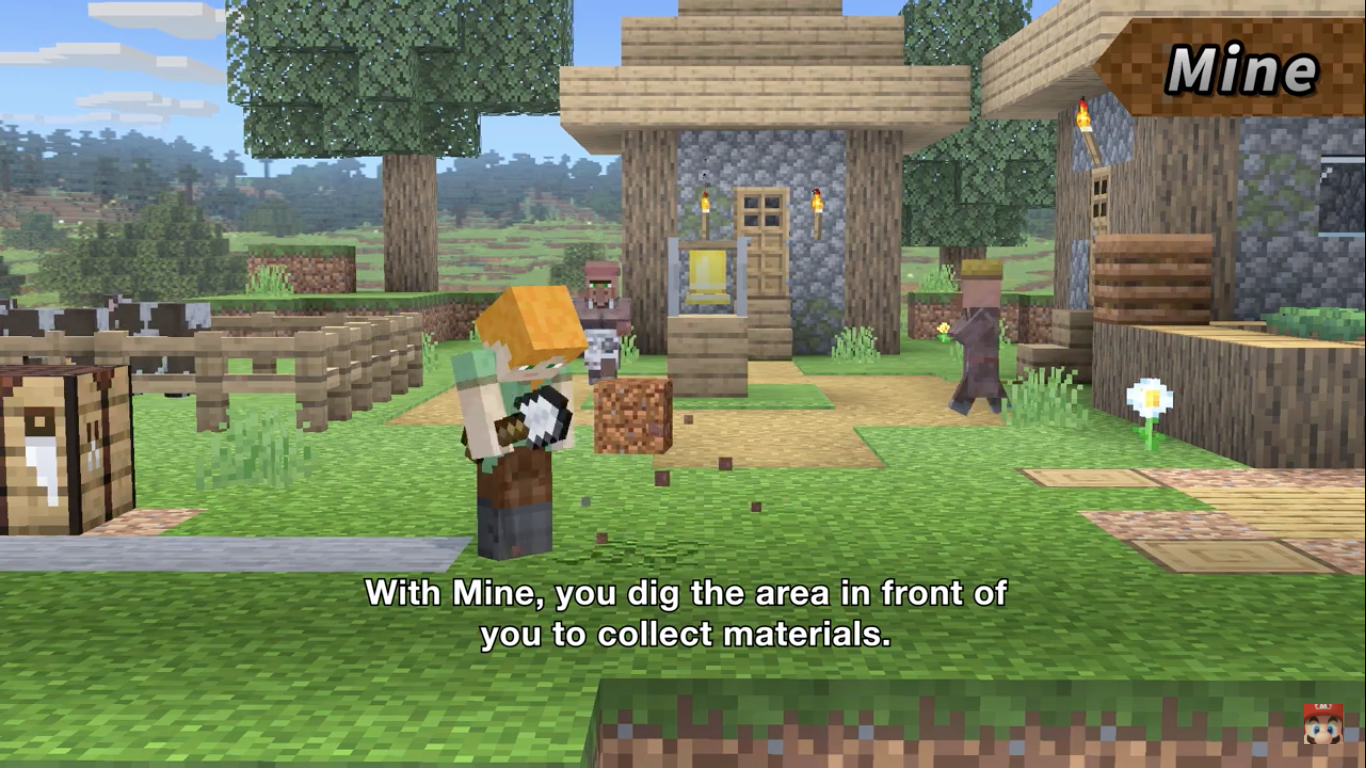 Crafting is the literal name of the game, so Sakurai had to incorporate all the ways players can create in Minecraft. He used Steve’s neutral B to do this. In the presentation, he showed how it works with Alex.

Pressing B while just standing around has Steve mine material out of the ground. The material you get depends on the terrain you’re in. DK’s jungle gives you a lot of wood, whereas a Zelda temple is full of stone. You can mine walls, and the speed at which you mine depends on the terrain. However, for balance purposes, all material is available at a pre-determined rate when you fight in Battlefield or Omega stages.

You can exceed your inventory when mining, which is where crafting comes in. A crafting table spawns near Steve/Alex/Zombie/Enderman when you start the match. Pressing B while standing near the table consumes your materials and either upgrades your tools or restores ones that broke. There are five levels of tools: wood, stone, iron, gold, diamond. While diamond is the most powerful, there are benefits to the others. Gold, for instance, has a faster attack animation.

One final note is that both you and your opponents can break the crafting table with attacks. It respawns quickly, but you obviously can’t craft while it’s gone. You can also summon the table to you by pressing B while shielding. 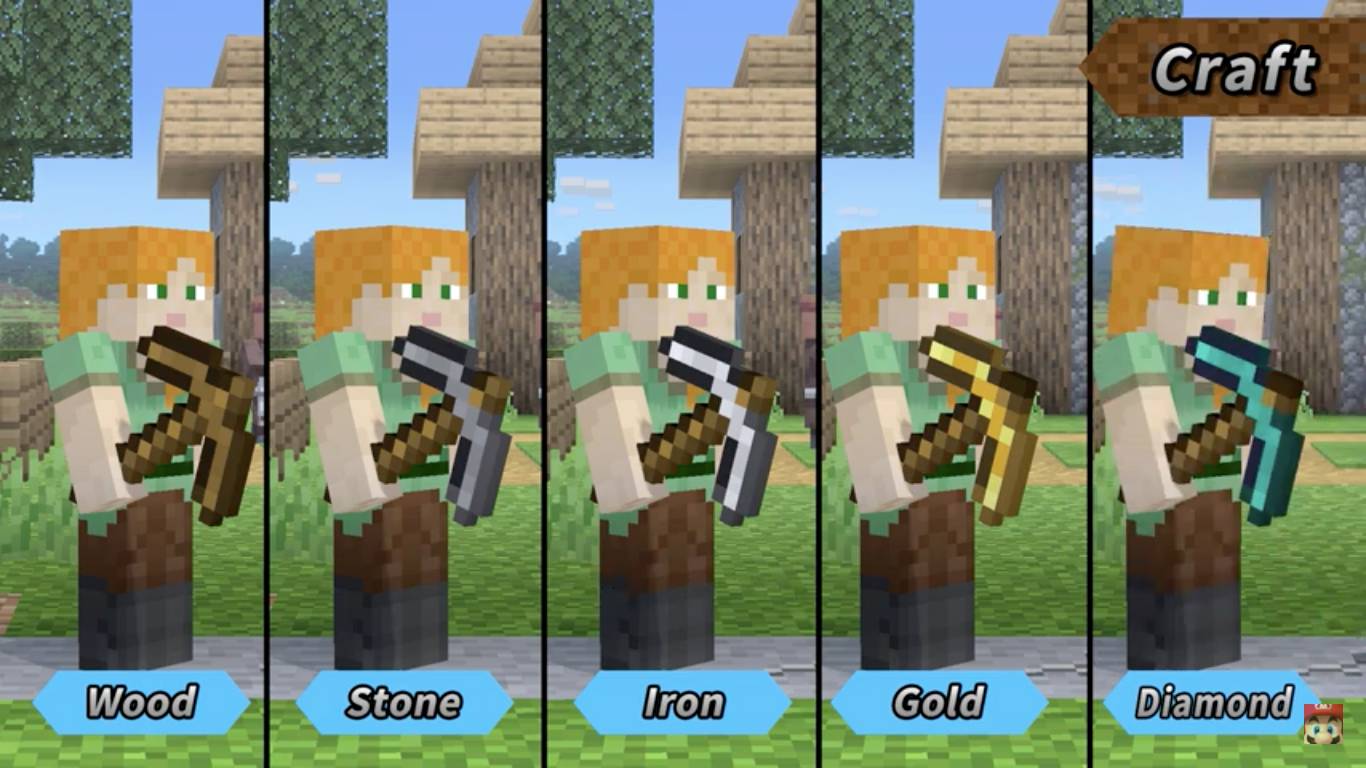 That’s not all neutral B can do. Pressing it in the air has Steve build a block using your cheapest materials. You can hold the button down to build as you walk, although the blocks are short-lived and will break. Stronger materials make for longer lasting blocks.

Sakurai showed off the potential terror that the Create Block ability will cause. In the hands of a skilled player, it could be used to build a wall to stop opponents from recovering. An aggressive player could also build right near the ledge and stand there, greeting opponents with a well-placed smash. There are some limits to this, as Steve is prevented from building too far away from the ledge or the upper limit of a stage. Essentially, you can’t hang out and build offscreen. 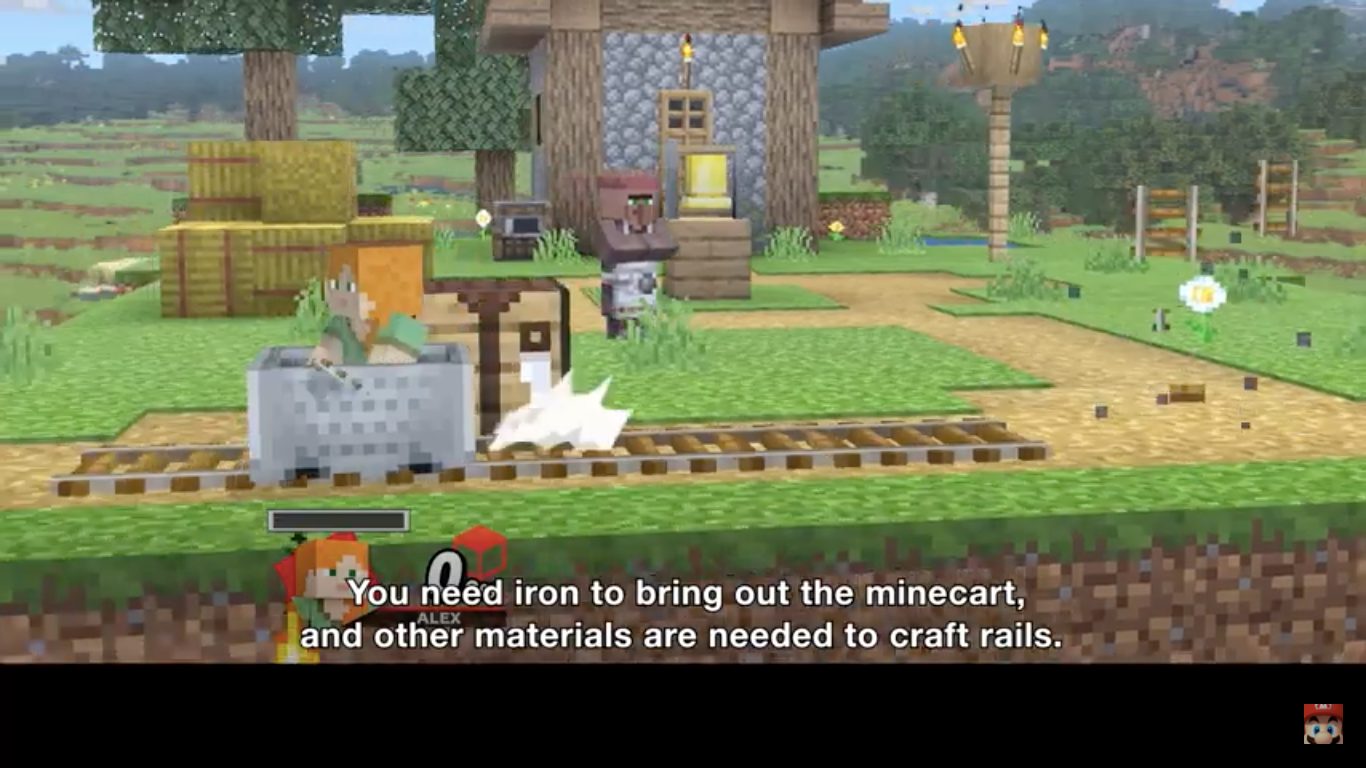 Side B has Steve build and ride a Minecart. Like similar specials (think Bowser Jr.) the cart takes off left or right depending on which direction you pressed. It does some decent damage and knockback. Steve can jump out of the cart at any time, and an empty cart can scoop up and carry an opponent. Iron is required for this, as is wood for the rails. If you have redstone and gold on hand, you can build powered rails which made for a faster ride and more damage.

Up B is Elytra, a set of fake wings that act as a glider. The first frames of the animation has Steve take out the wings and light a rocket to take off. This part of the move can damage opponents. From there, however, you’re vulnerable as you glide. Like other gliders in Smash, you have some control over your trajectory and can go far if you position right.

Down B makes a TNT block. Unlike actual Minecraft, you don’t need gunpowder. Instead, this move consumes stone and dirt. The TNT explodes, of course, and Steve can be hit as well. Attacking will expedite the process, but the controlled way to detonate it is to build a redstone circuit and pressure plate. Like many other bombs, TNT can be tossed into a chaotic situation in hopes of an easy kill. If you activate it with the pressure plate, you won’t fly as far, so reckless tactics could pay off. Sakurai also suggested placing it on a ledge for edge guarding. 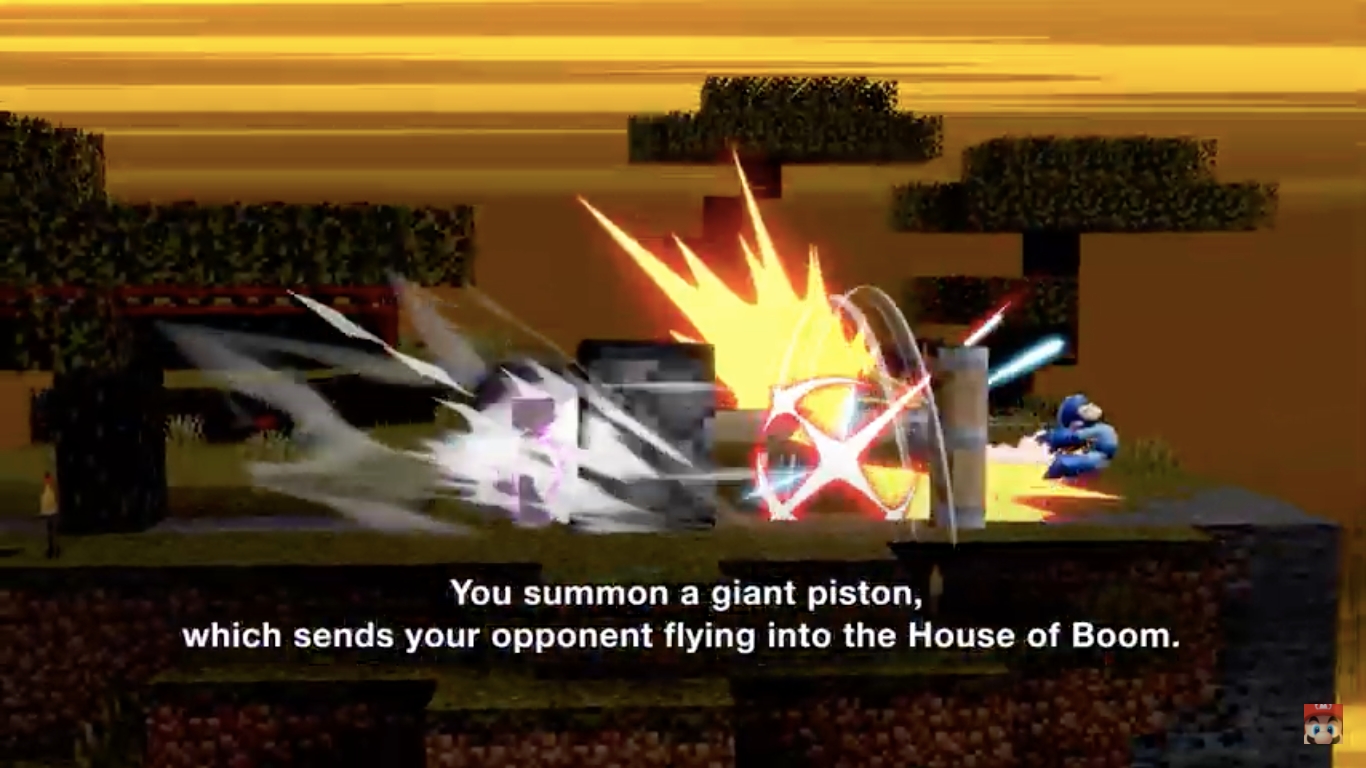 The final Smash has Steve throw out a giant piston. The device launches an opponent if it hits. The victim is then thrown into a house with Minecraft creepers, who explode while Steve eats a victory steak. Only one opponent can be sent to this “House of Boom,” but all foes hit by the piston will still be knocked away a fair bit.

Overall, Steve looks to be a novel fighter with a moveset that will take skill to pull off. Managing material and creating the right tool for the job is reminiscent of managing tomes as Robin or using weapons as Snake. The powerful explosions Steve summons seem to be balanced by his short range and long set-up times for the better moves. We’ll know for sure when Steve comes to Smash on Oct 13.