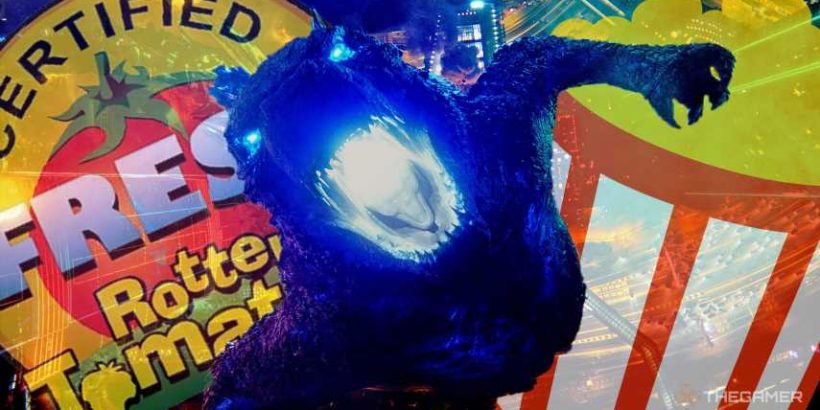 Cinemas have just reopened in the U.K., with moviegoers happy they can finally watch films on the big screen again. Netflix releases were enough to tide us over, but they lack the scale of the cinema. Godzilla vs. Kong is a movie that deserves such treatment, benefitting hugely from the theatre experience. It’s a loud, action-oriented, monster-packed spectacle. It happily bends its own rules and internal logic if that means the film can wow audiences, and I love it for that. Godzilla vs. Kong proves that films don’t need to make sense to be good, they just need to know what they are. Major spoilers in this article, so don’t read unless you’ve seen the film.

What’s clever about a film with a fight in the title is that everyone picked a corner as soon as the first trailer came out, so there was already an established sense of communal rivalry to be enjoyed upon entering the cinema. What makes this epic confrontation even better is that every fight in the film has a clear winner and loser, so that rivalry stays heated throughout the entire runtime. The film spends most of its time with Kong in an attempt to make us emotionally invested in him and back the ape with each passing encounter, but there was no chance of that happening. I was – and still am – team Godzilla all the way. It’s a choice between a radioactive laser dinosaur and a big monkey – I’m going laser lizard every time. 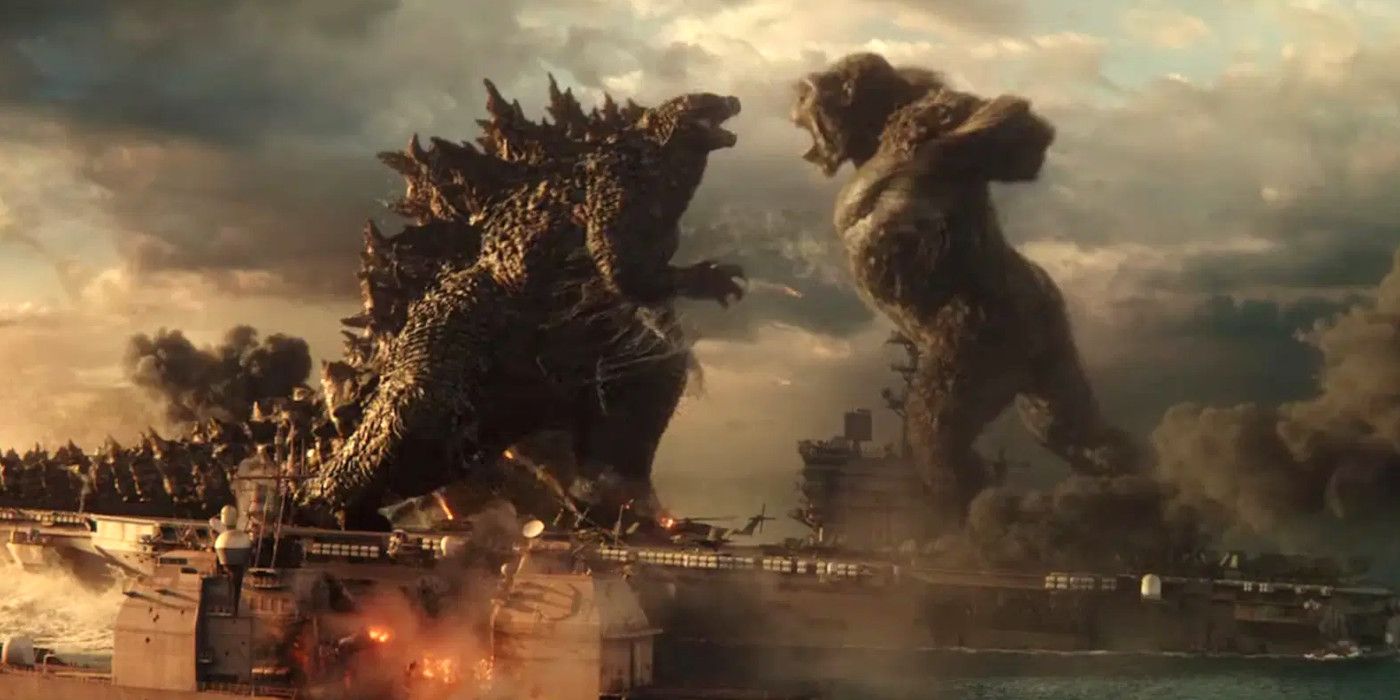 While Kong is given a more thoughtful and intelligent feel this time around, helping to undo some of his racially coded origins, Godzilla is given the opposite treatment, reduced to a rubble-making machine. I like this dynamic, as trying to also make us empathise with Godzilla would have upped the runtime and given us more time talking about monsters’ feelings, and less time seeing them wrestle each other. Godzilla mostly just skulks about in the ocean, popping up occasionally to attack a sketchy coastal research facility, or annihilating a fleet transporting Kong to the Arctic so that he can enter the Hollow Earth – like I said, silly. A big question I had was, “knowing Godzilla, a 400-foot titan was lurking in the depths, why would anyone ever build something on the coast or transport things by sea?” The answer, dear reader, is, “shut up and enjoy the ride.” Fair enough.

Finding out that Kong lives in a Truman Show-esque holographic dome designed to keep him content on Skull Island, after a storm killed all the indigenous people, save for one deaf girl who has been adopted by Ilene, a Kong specialist, was a pretty good way of explaining where he’d been during the other monsterverse movies. What’s silly, is that despite the dome, and all the people paid to watch Kong all the time, it turns out the little girl, Jia, has taught Kong how to communicate in sign language without anyone noticing. I know that this is saved for a big emotional reveal later on, but it’s just so absurd that no one would have noticed him communicating with Jia all this time. 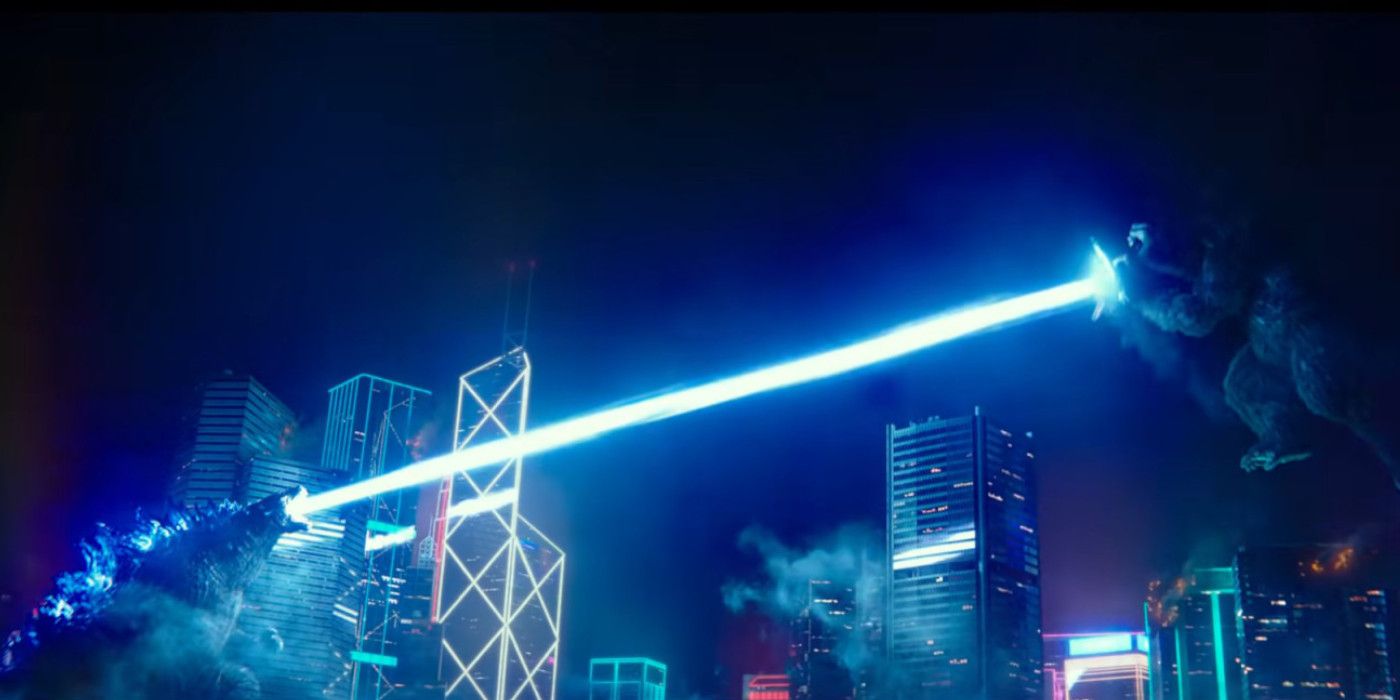 During The first fight between the titans, it finally clicked for me that the film was about fun, not serious sci-fi, and I was so relieved. It takes place on and around the fleet taking Kong to the arctic. Godzilla easily swims through their hulls, making a beeline straight for Kong, who leaps from ship to ship without somehow sending them careening into the drink. You really have to suspend disbelief for this fight, as at one point, Kong suplexes Godzilla into the deck of a ship without capsizing the whole thing. They then just punch each other in the face a whole lot – it’s incredible. It ends when Godzilla drags Kong underwater and chokes him out with his tail, and the ships then fire depth charges that stun Godzilla but allow Kong to swim up for air. Why don’t they stun him too and cause him to drown? Because then the movie would be over, and no one wants that. Godzilla does circle back to finish the fleet off, but they just turn everything off and play dead, so he goes away. Amazing.

I’m not here to ruin everybody’s good time, I promise. I love that this film ignores logic in favour of superior fights and more dramatic moments. I honestly applaud it for not trying to be stuck up and serious. This kind of silliness is exactly what we all needed after months of lockdown. The spectacle of the whole film really gets dialed up to 11 during the final fight in neon-lit Hong Kong. Seeing Godzilla absolutely demolish Kong, despite the monkey being armed with an ancient axe made from the dorsal fin of one of Godzilla’s ancestors. The debate is settled – Godzilla truly is the king of the monsters. However, Mechagodzilla, powered by ancient energy from the Hollow Earth and controlled by King Ghidora’s skull, shows up to ruin the victory party. The data for the energy source is just transmitted from the Hollow Earth to scientists above ground and then instantly synthesised, what? Is that how energy works? 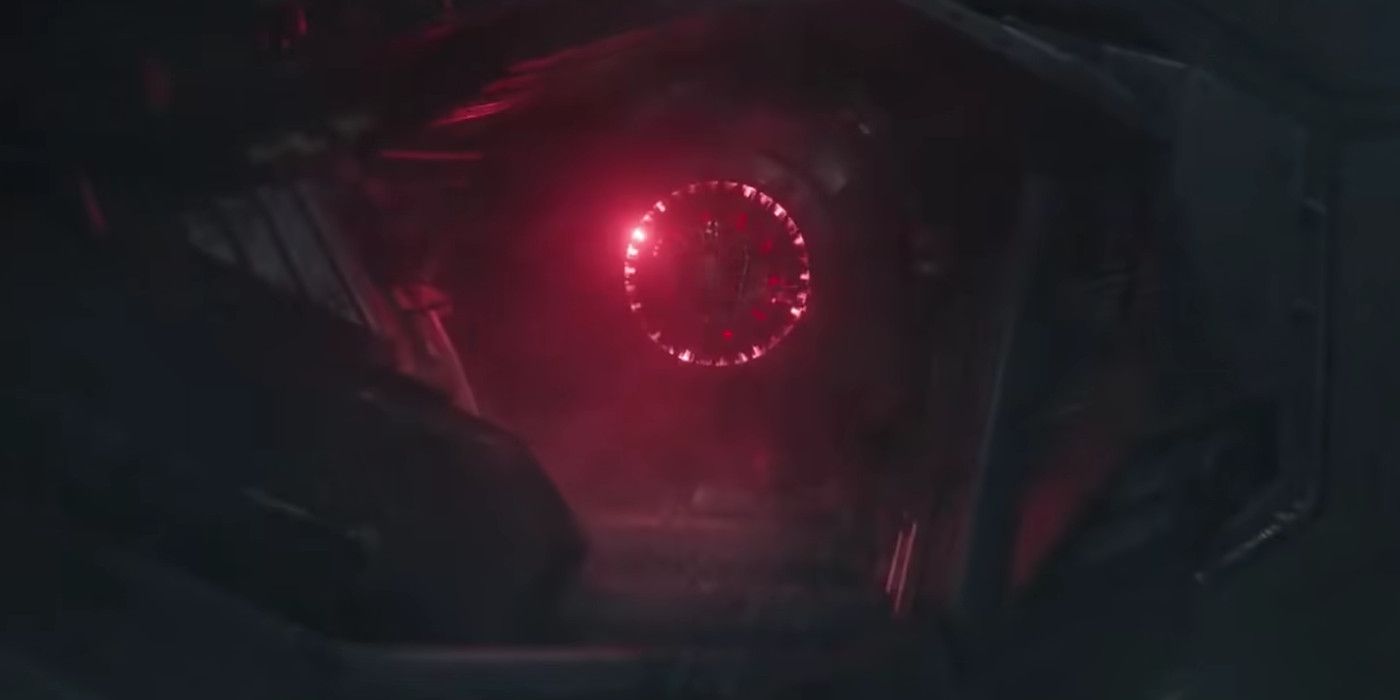 Now, while I’m a big fan of giant robots fighting huge monsters – I absolutely adore Pacific Rim – a big part of the lore of the titans is that they can’t be hurt by human weapons. Mechagodzilla, no matter what it’s powered by or which titan controls it, is still made of metal, something Godzilla and Kong should easily smash to pieces. But, again, that would be no fun. There has to be drama and tension, so Mechagodzilla lays the smackdown of all smackdowns on the OG, using rocket-powered superman punches and shoulder-mounted missiles to do so. My explanation for this is that Godzilla was tired from beating up Kong, otherwise, he would have torn through that trashcan with ease. Speaking of Kong, he gets revived when a hovercraft is turned into a big monkey defibrillator. Even the two titans aren’t enough to take down the mechanical monstrosity though. It seems like all hope is lost until some kids hack Mechagodzilla – controlled by Ghidora’s supercomputer brain – by pouring whiskey into a computer. This stuns the machine long enough for Godzilla to charge up Kong’s axe, and he swiftly removes Mechagodzilla’s limbs in a glorious display of sparks and oil.

Godzilla vs. Kong is a ridiculous display of style over substance and it’s much better for it. It doesn’t get bogged down in the nitty-gritty of the titans’ lore and it clearly has no respect for the laws of physics. While I’m not advocating for the dumbing down of all films, I’m glad the ones about big monster wrestling matches aren’t taking themselves too seriously. This kind of action is exactly what I needed after a year of fear and worry. The audience cheered and jeered at the fights – it was beautiful to see so many people having fun after the year from hell.