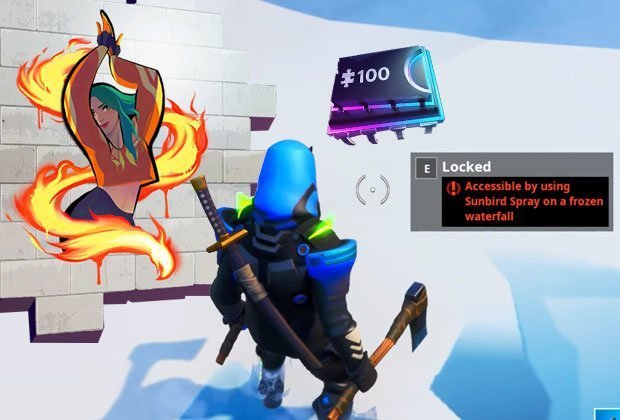 Today’s new Fortnite 9.20 Update might be taking all the headlines, but there’s a brand new Fortbyte to track down and for those of you hell-bent on collecting all 100 of the Fortnite Season 9, you should read on.

The new Fortbyte puzzle piece released today, June 6th, is Fortbyte 61, which comes with the clue ‘Accessible by using Sunbird Spray on a frozen waterfall’.

Once again we’re prepared to help if you don’t know what you’re doing, thanks to our beginner’s guide to Fortnite Fortbyte’s:

We’re still some way to the start of Fortnite Season 10 and that means there’s plenty of Fortbyte’s still to find, but with lots of new clues appearing for Season 10, including Dragon footprints and more. So the end is now in sight, if still on the horizon.

For the time being, let us focus on finding today’s latest Fortnite Fortbyte puzzle piece.

Looking for more Fornite Season 9 help? We don’t blame you, Epic Games crammed an awful lot into the Season 9 Battle Pass. Even if you’re a pro, it’s not always easy when you can’t remember where to go when you have to visit an oversized phone, big piano and giant Dancing Fish Trophy locations or Fortnite Sky Platforms. And if it’s not those Fortnite Fortbyte locations that’s got you busy, it’s trying to Throw The Flying Disc Toy And Catch It Before It Lands.

Maybe you just want to know what’s new in Fortnite? We’ve got a new Fortnite 9.20 update out now and there’s lots of new skins which have leaked too might return too! Well, we hope they do anyway.

Perhaps you’d like some help with last week’s Fortnite Week 4 Challenges? Most are simple, but you might be looking for some help with the multi-staged challenges t read: dance inside a holographic tomato head, dance inside a holographic Durrr Burger head and dance on top of a giant dumpling head. If that sounds like you, click those links for more help.

Fortbyte 61 Accessible by using Sunbird Spray on a frozen waterfall

Today’s challenge is fairly straightforward and the name of the challenge leaves no room for questioning what players have to do today.

The frozen waterfall is by Viking Village. You need to be at the bottom of the waterfall, and here’s where you’ll find Fortbyte 61:

You need to head towards the frozen waterfall which is south of Viking Village.

Once you get to the right location, you need to use the Sunbird spray on the frozen waterfall. However, do note that the Sunbird Spray can be unlocked only once you reach tier 26 in the Season 9 Battle Pass.

Once you’ve done all the steps, collect the Fortbyte and finish the game for your progress to count.

If you still need help, then have a watch of the above YouTube video by our regular Fortnite resource, Gattu.

As we always say, check back tomorrow for the next Fortbyte puzzle piece.