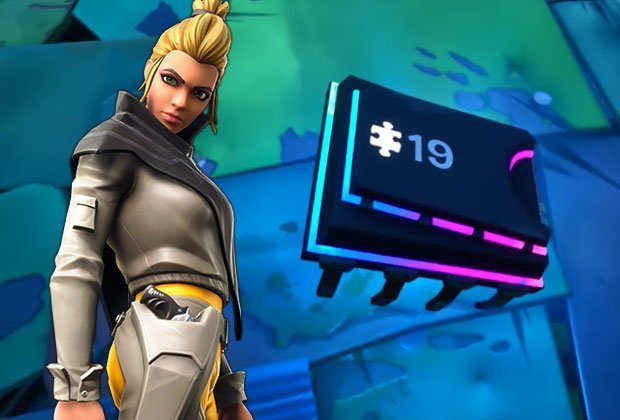 Who wants to be at E3 2019 roaming the conference floor, when you could be sat in an overcast London office building typing up the latest Fortnite Fortbyte puzzle piece.

I’ll tell you doesn’t wish he was in Sunny LA. Moi of course! (sobs internally)

The new Fortbyte puzzle piece released today, for June 12th, is Fortbyte 19, which has a clue that reads “Accessible with the vega outfit inside a spaceship building“.

For anyone still trying to uncover the mystery of these Fortbyte puzzle pieces, why not first have a read of our explainer to help you out:

In other news, a slight map change to the Battle Royale island has once again hinted at the destruction the big Polar Peak dragon could wreak over the many locations as we approach Fortnite Season 10.

Fingers crossed these Fortbyte puzzle pieces also lead us to some sort of big reveal, after all we are trying to collect all 100 of these!

But we’ve still a long way to go, so for the time being, let’s crack on with completing the latest Fortnite Fortbyte challenge.

Even if you’re a pro, it’s not always easy when you can’t remember where to go when you have to visit an oversized phone, big piano and giant Dancing Fish Trophy locations or Fortnite Sky Platforms.

And if it’s not those Fortnite Fortbyte locations that’s got you busy, it’s trying to Throw The Flying Disc Toy And Catch It Before It Lands.

Maybe you just want to know what’s new in Fortnite? We’ve got a new Fortnite 9.21 update update and also some new Horde Rush Challenges which just went live, too

Fortbyte 89 Accessible with the vega outfit inside a spaceship building

After a period of super easy peasy Fortbyte challenges, it made sense that Epic Games would start to ramp up the difficulty somewhat.

For today, as the clue suggests you need to first ensure you’re wearing the vega outfit.

Why is this tricky? Because you can only unlock the Vega skin once you reach battle pass tier 47.

Once you get past that quite high-barrier of entry you’ll be all sorted.

Now, from what used to be Polar Peak you want to head east, eventually, you’ll come across the big metal space ship construction.

This building/structure contains the Fortbyte puzzle piece in the front of the ship.

If you want some extra help, simply check out the above YouTube video from Fortnite content creator, Gattu.

Collect the Fortbyte, finish the game for your progress to count. Job done.

What’s next? Oh yes, check back tomorrow for the next Fortbyte puzzle piece and this season long treasure hunt!