FIFA 20 is an end-of-cycle iteration that can still legitimately claim to be different and better than its predecessors.

Sure, its Career suite has gone so long without substantial changes that anything there might make all of FIFA 20 feel like a new game. But Volta Football, a street soccer/futsal story mode, is what distinguishes this edition the most. It’s much meatier than the side mode I was expecting, and does more than its fair share to make the game feel fresh and new, rather than just an improvement. The simple fact is no sports video game this year added an all-new mode as dynamic as Volta Football. Its varying games — from three to five players a side, on different courts, played to different scores — is a great alternative to standard play, even if it’s not purely a FIFA Street revival.

Mostly, Volta Football is a way to skip to the good stuff of soccer, the quick passes and the scoring, in rowdy and rapid-fire succession. It’s also nice to knock out a match or four, either in the story campaign or as part of a world tour separate from it, as a chaser to a long bout in FUT or Career. There’s even some career progression for your created player, though I breezed through the perk tree so easily that it felt carried over from The Journey, the story mode of the past three FIFAs, without much extra thought. 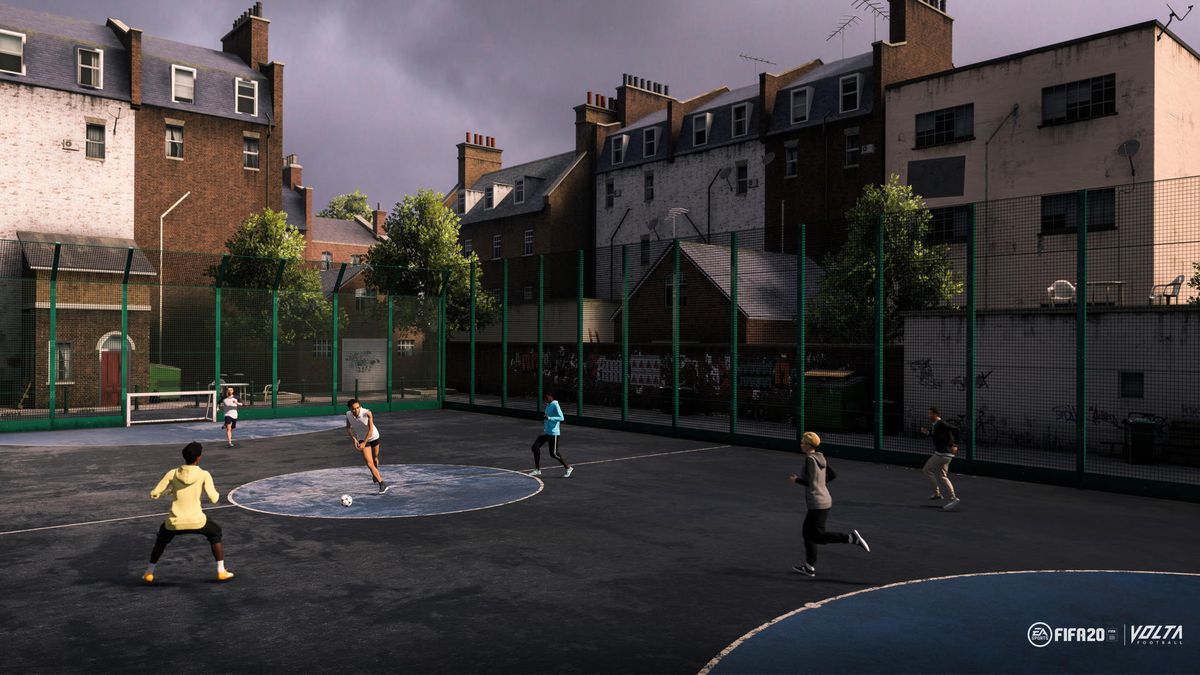 The numerous venues inside Volta Football are richly detailed and varied. Some have walls instead of touch lines, which can be exploited with bounce passes.
EA Vancouver/Electronic Arts

Volta Football’s story is entirely different, starring a created avatar instead of fixed player characters. But it features the same, somewhat hammy themes of sports story modes — overcoming adversity, believing in yourself or, at least, not underestimating others. You’re part of a globe-trotting street soccer crew trying to be the best in the world at a fast-paced game played on rooftops and in alleyways. Some real-life big names cameo (I learned who street superstars Jayzinho and Rocky Hehakaija are), and the boss battles — training exercises and title matches — can be challenging to the brink of frustration, but ultimately worth repeating until you win.

The real progression is in building up your team’s cast of supporting characters, both women and men, all impossibly hip and worldly looking. Win a match and you’ll get your pick of a new recruit, somewhat like winning a marker in the Need For Speed franchise. Then go in and trick them out in the threads you’ve won, which are always on offer. This is actually more necessary than it sounds, because I often found myself facing clones of players I’d recruited, and confusion reigned when mine were in their default threads.

Volta Football is so much its own world that I overlooked the reality that women soccer players finally have a career mode in this video game (much like NBA Live 19 added with The One last year). Mixed-gender competition is simply how it is with rec-league soccer, here and in real life. This can even reach into Career, as I was delighted to find the avatar I’d created in Volta Football could be imported with a single click into Career, as a player or manager. Women can be managers but not players in Career, although the facial features of either gender can be applied to a male or female head — a twin sibling for your created star, in other words.

Volta Football isn’t FIFA Street mainly because trick shots and fancy footwork play less of a role. I was more encouraged to make standard plays like low, driven shots (because bagging three would unlock a piece of gear in the first two-week “season” of content). But if you come to Volta Football expecting to do back-heel flicks and spectacular juggles, the defense will easily dispossess you and wing off a shot with startling accuracy, even at distance. 3-on-3 soccer especially requires paying attention to teammates, taking advantage of spacing, and denying shooting and passing lanes on defense. 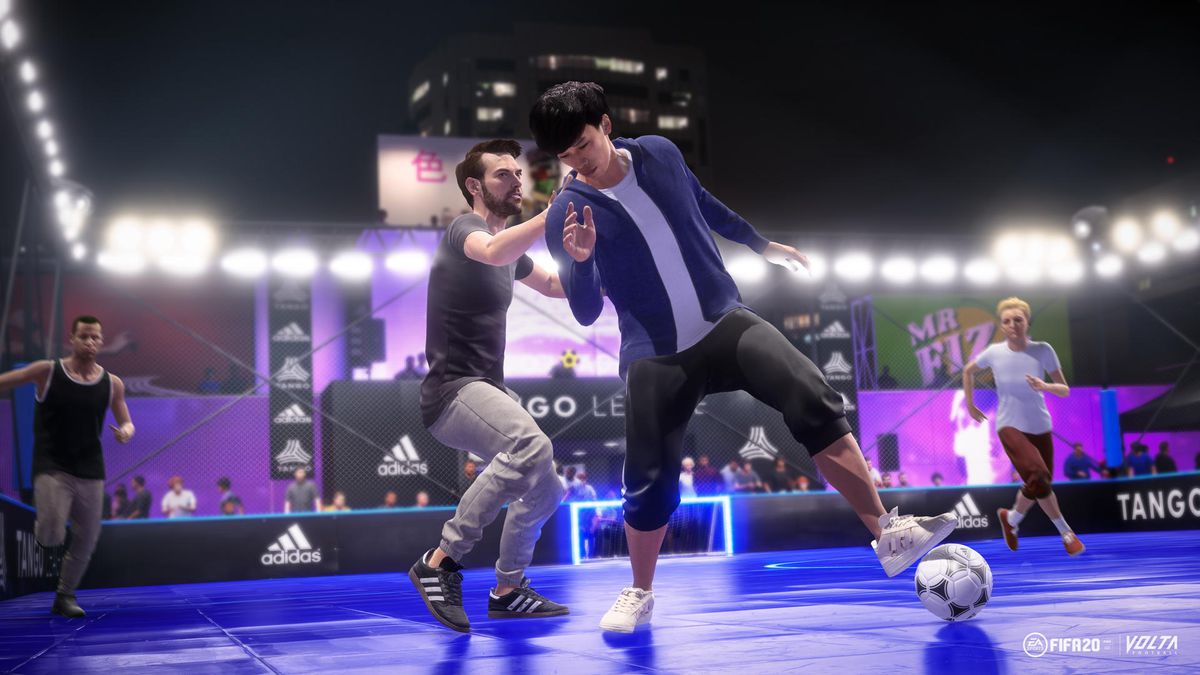 Problem is, I found my supporting AI in Volta Football inconsistent in its own way as it is in the full 11-on-11 matches of FIFA 20’s main modes. There is no offside penalty in Volta Football (what a fun-killing idea, obviously) but my teammates mostly hung back as if there was, waiting for me to try to penetrate the defense and then cycle the ball out to the wing.

Other times in street soccer, though, the AI would smartly break an off-ball player to the goal after passing it back to a controlled player, setting up a thoroughly satisfying bang-bang score. I just wish I knew what triggered that kind of attack. At Volta’s higher difficulties, it is tougher to suck in more than one defender to the ballhandler. That contributes to extensive possessions and high stakes scoring chances, though that tug-of-war was enjoyable in its own way, too.

In big-time, real soccer in the stadium for Career and Ultimate Team, AI passivity is largely seen in the defense, which can stand around watching and turn a standard build-up pass into a panic-inducing counter-attack. It made me wonder if my pre-game instructions to the defense (to press on a “hard touch,” basically a mishandled ball or a risky pass) were overriding common sense.

Attackers can take greater advantage of mistimed tackle attempts and that, paired with my tendency to overrun plays, left me going long stretches where it felt like I’d forgotten how to play soccer. Oftentimes the answer is just to make use of something I’d forgotten — pushing the pace on offense with the D-pad, for example, or shielding the ball on the dribble, or just playing a fundamental cross-and-volley attack from the edges. 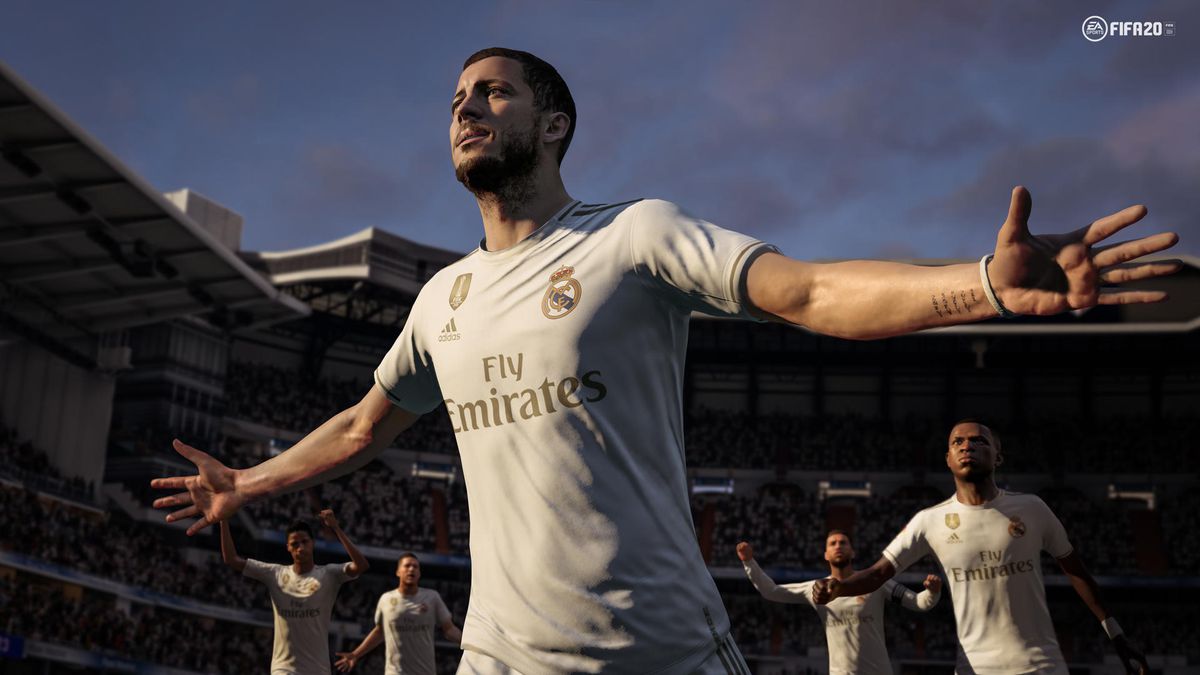 Real Madrid’s Eden Hazard is the cover star of FIFA 20, and Spain’s La Liga gets plenty of love in the game’s broadcast presentation.
EA Vancouver/Electronic Arts

And that, I’m pleased to report, is aided by a new strafe dribbling control. Keyed in with a bumper button, it’s better at slipping by a defender and creating space for a pass than it was to break out and score one-on-one. There’s a more advanced set-up touch move on the right stick and bumper, but I’m not sophisticated enough to pick the best time to roll it out. The animation is one of the longest in the moveset and allows plenty of time for defenders to thwart it. But it’s dynamite when it works.

This is what keeps me storming through matches like a fistful of Cheez-Its, whether I’m in career or FUT. Both modes offer newer and larger contexts for those exploits. In Career, I’m treated to cutscenes and conversations involving my manager, which have the effect of boosting (or lowering) club morale and affecting performance similarly.

This even goes so far as for transfer negotiations, although making that a manager-meets-manager scene kind of drags it out unnecessarily. But the postgame news conferences can be harrowing, in that my tactics were constantly questioned, and the “good answer” was not so obvious among the choices. Bad answers create bad morale (and worse performance), problems that aren’t easily solved.

Frowny faces next to player names in the menus were frequent enough, even after getting a good result, to seem almost arbitrary. Yet the new chat layer to a manager’s career is entirely one-way — players approaching me. I can sell an unhappy guy languishing on the bench, but I can’t go to a vital contributor in the starting XI and ask what the trouble is. 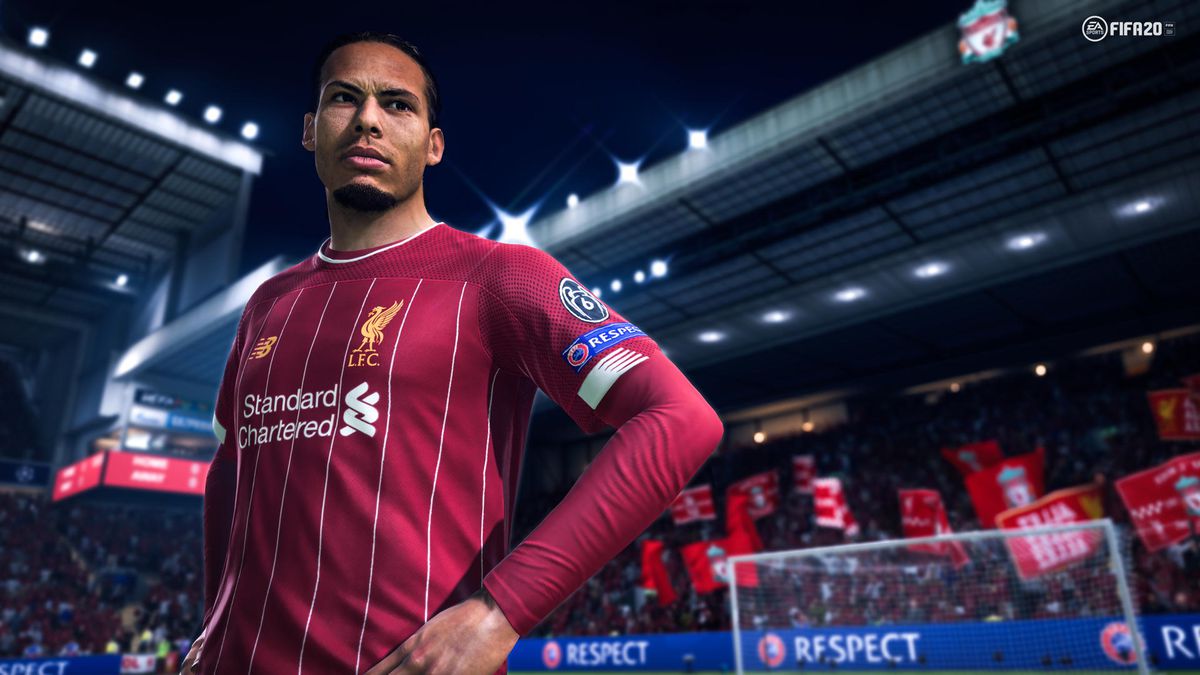 FUT’s new intrigue is a battle pass-like approach to some of its content, which I talked about last week. The microtransactions are still there, for sure, but having a clear path to free and specific awards (as opposed to a pack of cards or a bunch of coins) is a fair gesture to people who want to play without guarding their wallets.

I don’t mean to minimize how FUT is monetized, as paying real money really does seem unavoidable if you’re playing Ultimate Team to truly build a superstar team, or even to be competitive among the human population. I suppose I use FUT differently, though, which is simply to acquaint myself with a bunch of players I’ve never heard of, in uniforms I’ve never seen before, and learn how to fit their talents together in a formation different from the standard 4-4-2. I’m also mostly a single-player FUT player, and this is a mode that serves that constituency at least as much as Madden NFL 20.

But with FUT, Volta and Career, there is still plenty of reason to lose scores of hours inside FIFA 20, even if those reasons are largely the same as last year’s, and several years’ prior: experiment with tactics, try out new tricks, exult in the love-it-when-a-plan-comes-together thrill of a counterattack goal in the 82nd minute.

And FIFA 20 does have more to do that is genuinely new, even if those things are part of an ensemble rather than headliners themselves. If the game was an Oscar winner, it’d be for Best Supporting Actor. That’s not Best Picture, but it still gets a trophy and applause.

FIFA 2020 is now available on PlayStation 4, Windows PC, and Xbox One. The game was reviewed using a final “retail” PS4 download code provided by EA Sports. You can find additional information about Polygon’s ethics policy here.