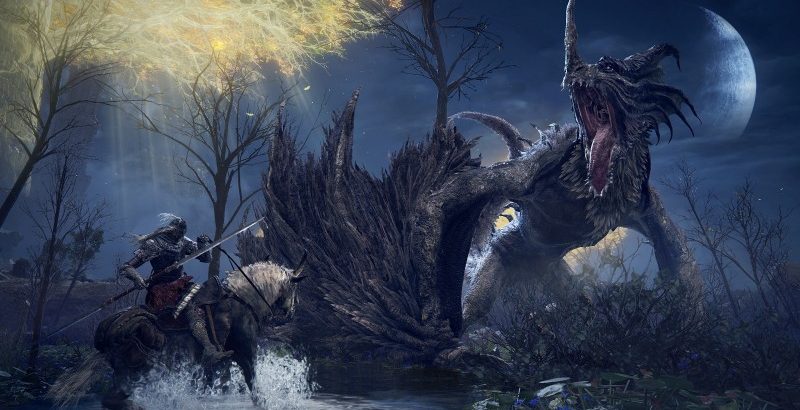 Elden Ring’s open-world contains tons of smaller-scale side dungeons to explore and myriad secrets to discover as you zip around on your spiritual steed. However, these wide-open spaces are quite different than many of the corridor-esque zones that have previously been associated with From Software action RPGs. What does this mean? It means that yes, you can approach the challenges of the world with melee, magic, and ranged options just as you would in other From games, but you can also employ stealth as both an offensive option and a defensive choice.

As is often the case, many lessons and aspects from older From games make it into their new projects, and Sekiro’s influence is felt here with a bit of stealth and stance-breaking. While breaking an enemy’s stance is somewhat similar to how staggering an opponent would work before, it also offers up a critical strike (similar to Bloodborne’s visceral attack window) opportunity. So if you see a giant lurking around in an open field, you can take the trail less traveled and sneak around them in some bushes if you like. That’s probably the right call as you work around an area for the first time. Like Sekiro, stealth is great for both avoiding dangerous encounters but also for initiating combat, and can make all the difference in success or failure. In a brief video, we saw a player take out a traveling caravan that was stopped for a break. Inside the caravan treasure awaits, but there were many guards in front and to the sides.

The player decided to approach carefully and use a sleep dart to disable and kill the first guard, and then strategically visited the outskirts of the encampment to backstab takedown other guards that were looking down at the valuable payload. Sleep darts are super cool new tools that allow you to disable opponents and execute a crit on their prone form. A little taste of magic was also used to procure the loot, a purple ground blast that’s channeled via item usage and not traditional spellcasting, so even if you choose to go heavy melee or ranged focus you can still access some spot magical effects via items. And speaking of items, let’s talk about a new kind of item that shall prove extremely useful when traveling through these vast areas alone.

Summoning spirits is a big new component to the From Software action RPG formula in Elden Ring, and these can be acquired, leveled up, and upgraded in different ways that aren’t elaborated on right now. These spirits can take many forms, but one we saw in this demo summoned a small squad of trolls, including a beefy-style tanky troll with a big club and smattering of smaller goblin/orc looking things. What do these do? Well, in addition to dishing out and damage and getting in combat, they fulfill a critical function in battle – they take the enemy’s attention. This can be super helpful in a boss battle to let you get some hits in against a foe without windows of opportunity or in the open world where you may be faced with many different enemies from different directions simultaneously.

Bosses are out there in the open world, too. In the short video we saw, two players carefully maneuvered through the bushes to avoid some huge giant creatures that were sort of similar in design to the cloaked/covered man-serpents of Dark Souls III’s Archdragon Peak. In fact, the field boss they were headed to also shared some similarities. With a long-edged weapon similar to a scythe, the boss of the area was a humanoid shape with a variety of extremely dangerous attacks including wide-multi hit combo swings, point-blank-area-of-effect fire, and more.

The boss creature was wrapped in blankets or a shawl (it was kind of hard to see perfectly and notetaking had to be fast), and featured the uncomfortable elongating nature of the aforementioned Archdragon Peak creatures – as in its neck could pull a Mr. Fantastic and stretch out for both a ghastly visual and a variety of dangerous attacks. This is known as a field boss, and the players were eventually able to triumph against it, and my keen eye noticed that the boss’s demise unveiled a Site of Lost Grace where it was slain, meaning you can acquire checkpoints across the open world by slaying bosses in some areas.

Everything we saw in the short video felt very Soulslike with a touch of Bloodborne and Sekiro sprinkles, but also crisp, clean, fluid, and fantastic. I try not to get excited about games until I’ve actually had hands-on with them, but I’m as optimistic as can be for From’s upcoming title and I cannot wait to see how it lands on January 21, 2022.