Everything that happens in Techland’s Dying Light 2 happens incredibly fast. Watching the first-person parkour game played well — which I was able to do at this year’s E3 — is like watching an action movie from the first-person perspective. It can be dizzying at times, with the main character leaping from rooftop to rooftop, then grappling with enemies at close range. At other times it can be downright frightening, with tense standoffs against the undead deep inside dark, cavernous buildings.

But binding it all together is some very skillful world building, and a storyline that tends to reveal itself only when things go terribly wrong.

Set sometime in humanity’s future, civilization has entered a new dark age brought on by an infection that turns people into flesh-eating zombies. Forced inside the walls of a single, pan-European city, small enclaves of survivors have sprung up in bastions on top of tall buildings. Only by staying in the sunlight, or huddled around special ultraviolet bulbs at night, can they hope to keep the undead at bay.

The environment of the city is built up in layers. Its highest points are recently-built, improvised wooden structures. Immediately below that are the remnants of high-rise penthouses and office buildings. During the demo the main character, named Aiden Caldwell, was able to leap and swing from point to point, at times with the help of a small glider and a grappling hook. Moving quickly, he passed through tiny living spaces, scattering pots and pans and startling civilians. Inside some of those buildings were drowsy packs of undead, mute and shuffling in the shadows.

Below that uppermost level of the city, things begin to get progressively more dim. Packs of zombies appear more frequently, but are still manageable. Aiden is able to cut through one or two in a pack of half a dozen, then exit the room quickly before escaping to the next rooftop. At one point in the demo, Techland even showed how by wrestling with a zombie, and then pushing it out a window, Aiden can use the undead to break his fall. Traversal is fluid, and rewards creativity and improvisation.

It’s only in the deepest parts of the environment, the oldest places in the city, where the hordes become so large that they block Aiden’s path. It’s inside these abandoned churches, museums, and civic buildings where zombies accumulate during the day. Out of reach of the sun, they’re waiting until nightfall so they can go back out into the streets to feed.

That kind of layering, explains Techland’s creative director Adreian Ciszewski, is intended to evoke in the player a sense of loss and of shame at how far humanity has fallen. It’s only the most fragile, temporary spaces where humans can live. Meanwhile, the solid, permanent structures have been taken over by the undead.

“In the same way, people have stopped believing in a religion, in governments, even in science,” Ciszewski says. “They begin believing in different things; the new religions, new factions that split. They’re not cooperating, and they are not united.”

Aiden’s goal in Dying Light 2 is to work for those factions, to ally with them in an effort to improve the living conditions inside the city. In the demo I was shown, he’s running out on a mission from the militaristic Peacekeepers faction and hunting down the Colonel, a leader of the Renegades. His goal is to turn on the city’s pumps and bring back a source of fresh water for the people.

But, outside the safety of a central hub where starting quests are doled out, one false step could spell disaster.

At one point in the demo, Aiden scampers across a wooden ledge only to have it fall away. Sliding sideways down a sloped roof, he crashes through a ceiling several stories down, falling further and further into the basement of an older structure. When he hits the ground, he’s surrounded by undead. Only through brute force — and the limited use of a UV flashlight and special UV flares — can he hope to make his way back up into the light.

But, while Dying Light 2 seems to have a good feel for its combat mechanics, the game’s narrative itself seems much more experimental. Penned by Chris Avellone (known for his work on Planescape: Torment and Fallout: New Vegas, among others), Ciszewski says that players will likely only experience about 50 percent of the storyline in their first playthrough. That means the same sense of loss on display in the game world extends to Dying Light 2’s storyline as well.

“We have a golden rule that you need to lose at least 25 percent of the content when you’re playing the game,” Ciszewski says. “For us, losing the content might feel like a bad thing, but in a game with choices and consequences it’s actually a good thing.” 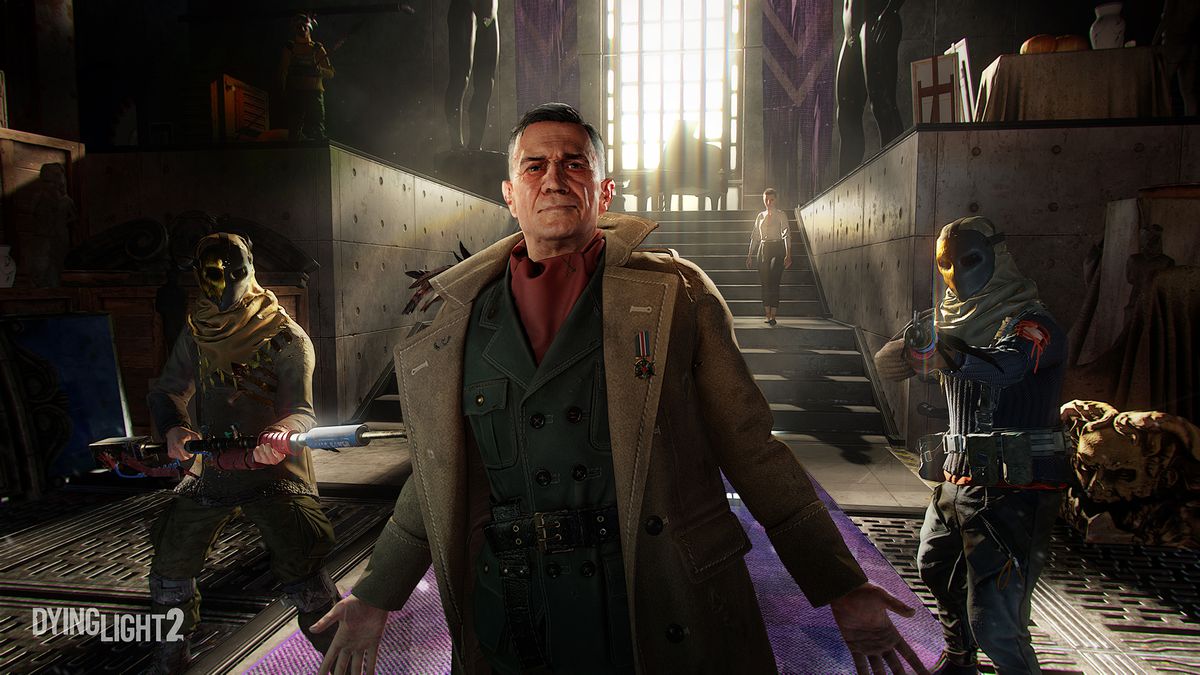 Techland’s E3 demo featured an encounter with The Colonel. Aiden Caldwell could kill him, releasing fresh water to other parts of the city, or ally with him and keep the pumps turned off.
Techland

Through the player’s actions, major characters will be killed off. Whole factions may come to see Aiden as the enemy, and attack him on sight. Entire sections of the city will open up or become impassible. These changes will directly impact what quests are available for the player, and even how the game’s branching narrative will end.

In the demo I was shown, turning on the water pumps opens a dam which lowers the water level, exposing an entire neighborhood. That creates new areas for Aiden to explore, while also awakening a powerful breed of zombie in the muddy depths. It also clears a path for the Peacekeepers to launch a full-scale assault on the Renegades.

Played another way, the water might not flow out to the civilians, that part of the city might never become available to explore, and the Renegades might be able to hold out against the Peacekeepers. Of course, whether players will stick around for the entire narrative experience, playing it through multiple times, remains to be seen. The core game is currently between 13 and 15 hours long, and including every branching option and sidequest there’s roughly 50 hours of content. Thankfully, Ciszewski says Dying Light 2 will include a New Game Plus option, allowing players to start a second game with all their existing skills and upgrades unlocked.

An even bigger challenge is the refinement of Dying Light 2’s multiplayer gameplay. Pressed for details, the team sounded like they were still exploring their options. Ciszewski says that other players will be able to join my game at any time, helping me to make changes to my game world. Any experience points that they earn they can take with them, while any changes made to the world will only impact my experience.

Right now, he says, the team at Techland is actively exploring when and how it encourages players to take the leap into multiplayer in the first place.

“We’re introducing tiny gaps in the story when you really do need someone [to help you],” Ciszewski says. Those could be difficulty spikes or multi-step missions that require players to collaborate over long distances. The adjustments they’re making are in how they incentivize players to even want to work together in the first place. 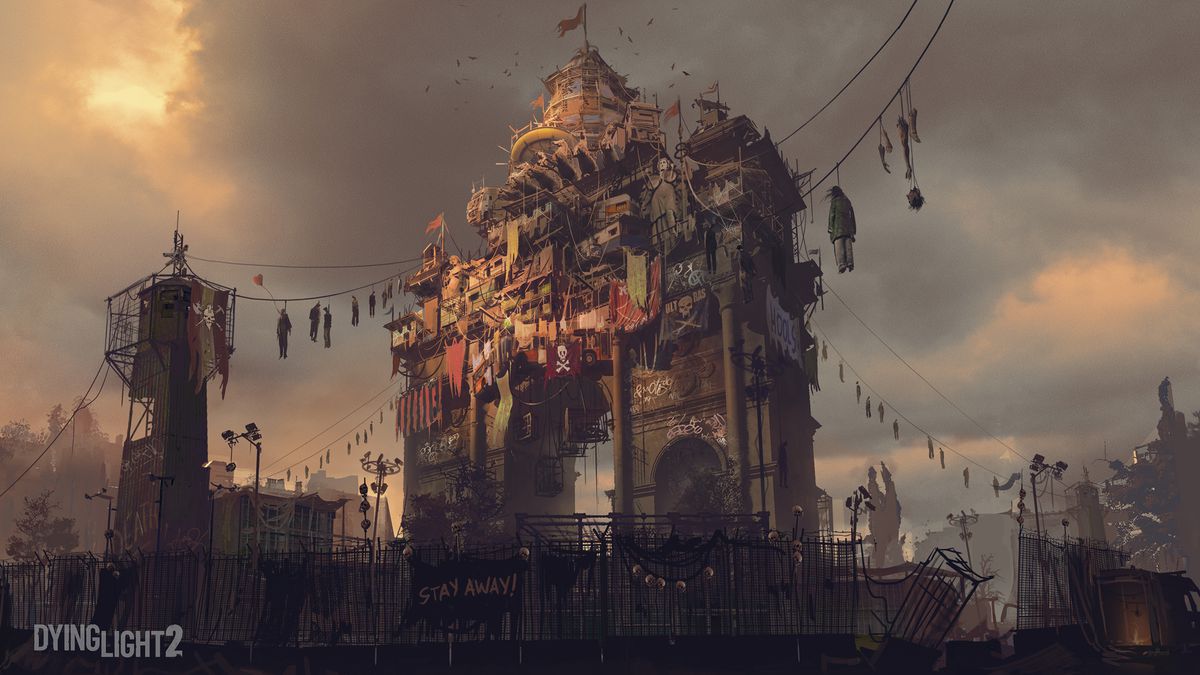 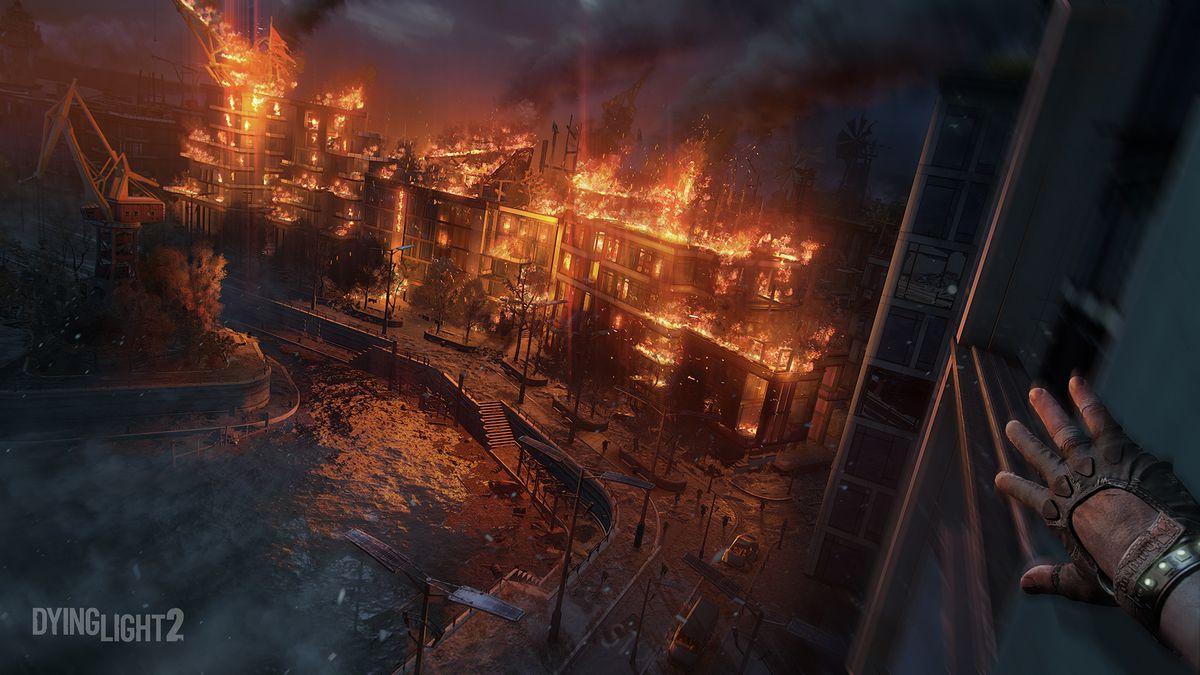 An in-game screenshot of a region of the city on fire. Player decisions will open or close entire sections of the city. At least 25 percent of the game will be lost, made unavailable by the choices that players make, each playthrough.
Techland

“If you start [a multiplayer session] once you think, ‘Oh, it’s really cool to play with someone.’ And then you might become addicted to that style of play. So we’re definitely working on the moment when you join. When is the best moment? And what motivates people to play together? So, we are working on that, but I cannot tell you more.”

What he could tell me, however, is that the press has so far failed to pick up on a key aspect of the main character himself. Everyone in the city is infected with the same virus as the zombies, and it’s only by staying in the light that people can keep from becoming undead. But for Aiden, the virus works very differently.

“Aiden is really great at parkour and combat,” Ciszewski says. “He’s almost like a Jedi. […] But you can stay without UV light, if you stay in the darkness for a certain amount of time, it’s an opportunity for you.”

For Aiden, the infection triggers hidden powers that will allow him to become more than human. With those powers, Ciszewski says, players will be able to go places and do things that normal humans can’t. Talking to Ciszewski, I get the impression that there are a few more layers to the city, and to the story itself, that Techland simply isn’t ready to talk about just yet.

Fans will have to wait until spring 2020 to find out more, when Dying Light 2 launches on PlayStation 4, Windows PC, and Xbox One.