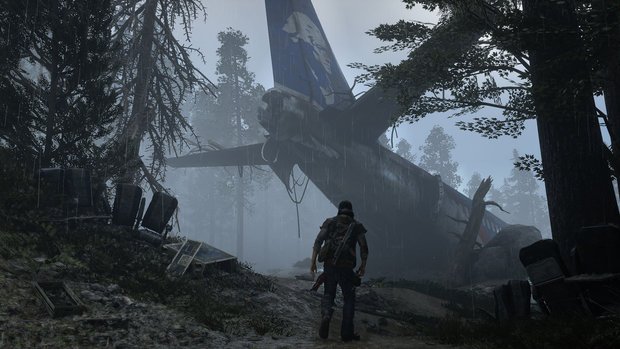 Make or Break: How to kill The Breaker in combat

The best way to get the fight going is to throw a Molotov cocktail at the unsuspecting Breaker as it feeds, dealing a crucial amount of damage and getting a head start in the fight. Fire is the only thing that significantly damages this boss, so make sure you have plenty of parts to craft Molotov cocktails as the battle goes on.

The Breaker is extremely fast meaning that it’s hard to keep space between you and it, which is exactly what you need to do in order to stay safe. As he rampages towards you, dodge to his left or right side which will leave you behind him. While he turns to close the gap is a good time to open fire at him or run away to create some distance.

Littered amongst the carnage of the plane wreck are flammable cases which will explode when shot at. One of the best strategies to take down The Breaker is to run around the area to create the much-needed distance mentioned earlier, and then time your shots at these cases as the Breaker runs by them.

If executed correctly, these explosions will engulf the Breaker and set him alight, dealing initial damage as well as continued scorch damage until the fire burns out. During these moments (when The Breaker is writhing in the flames) take the time to reload your guns, heal or even take a stamina cocktail to boost your endurance. If you have time left to get some hits in, make sure you’re not too greedy and are always mindful about maintaining that space!

If the Breaker does manage to grab you, a quick time event will initiate where you have to mash a set button to prevent him from strangling you. When you’ve successfully held the boss off for long enough, he’ll throw you to the ground. Be careful, this landing hurts and if your health is low enough this can even kill you.

Talking of killing blows, watch out for Newts at the edge of the arena near to where you entered the boss fight. If you get too close to them and have low health, one will jump on you dealing damage that could potentially end the boss fight prematurely.

Be smart and aggressive and you’ll eventually be able to slay The Breaker. Once he falls, collect his bounty and the antibiotics you’ll need to progress in the story.