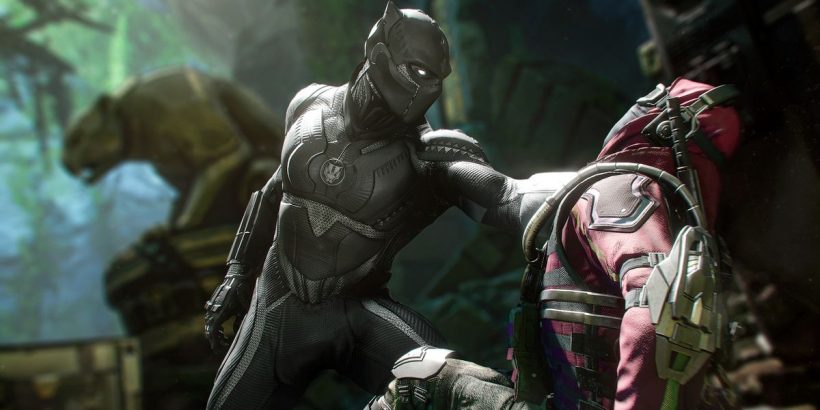 “My mom’s always right,” Christopher Judge told me in an interview ahead of his starring role as King T’Challa, the Black Panther, in Marvel’s Avengers’ upcoming War for Wakanda expansion.

Crystal Dynamics and Square Enix announced that Judge — known as the voice of Kratos in 2018’s God of War and as Teal’c in Stargate SG-1 — would play Black Panther in an Entertainment Weekly interview in mid-July. In the article, Judge revealed that he initially turned down the opportunity to voice T’Challa, believing that nobody could do the role justice after Chadwick Boseman. But his mother, as well as his children, convinced him otherwise. On the other side of the experience, Judge told me he felt fortunate and blessed to be able to play T’Challa in Crystal Dynamics’ video game adaptation.

Judge was cast as T’Challa, and recording began, before Boseman’s death in August 2020. But speaking to both Judge and Evan Narcisse — narrative consultant for War for Wakanda and Marvel’s Spider-Man: Miles Morales, and writer of the Rise of the Black Panther comic — it became clear that their version of T’Challa was always going to be his own man.

Judge’s turn as T’Challa marks his second major video game appearance in which he’s playing a character who was already defined by another actor’s voice. Boseman introduced non-comics fans to T’Challa in Ryan Coogler’s 2018 film Black Panther, and T.C. Carson originated the role of Kratos. When I asked Judge how the audience’s expectation affected his performance, he boomed back, “None,” in his famously deep voice.

“What another actor does with the character is what they do,” said Judge. “I always take it that I was probably brought in for a specific reason, for a specific purpose. And so I always preface anything that I do, that is like this, that it has to be my take on it.” Judge told me that he is fully aware of the “towering, wonderful” performance Boseman gave as the Marvel Cinematic Universe’s T’Challa, but said that he never wanted to emulate it.

Judge worked with Beth McGuire, the dialect coach for the Black Panther movie, to nail the Wakandan accent and get Judge away from his own lower register. The accent’s “lyrical” tone pulled Judge out of his comfort zone, he said, and away from the deep voice that fans expect from him — what Judge called his “moneymaker.” To do the accent properly, he needed to speak in a voice far different from the one he’s known for. But that plays into Judge’s own desire for distinction.

Originality is a personal philosophy for Judge, and it goes past his own portrayal as the king of Wakanda. I asked Judge how, hypothetically, he would consult on a big Hollywood film adaption of Stargate SG-1, reimagined like J.J. Abrams’ Star Trek films. What would he tell the actor playing Teal’c, a character he made famous?

“Don’t watch any of the 10 seasons that we did,” Judge laughed. “I would say, ‘Just make it your own,’ you know? It’s not going to change what I’ve already done. […] I think that’s to be said for all performers. I mean, you have to make things your own — you have to let the emotional structure of characters fall where they may, and just make them as honest as you can.”

Black Panther must work with the other Avengers to help stop Klaw.
Image: Crystal Dynamics/Square Enix

Judge and Narcisse worked to create something players haven’t seen before. As a celebrated comics writer, Narcisse’s job for War for Wakanda was to consult on the dialogue and concepts explored through the story. Part of that involved helping to craft this new T’Challa. While Judge and Narcisse wouldn’t give any specifics, to avoid spoilers, our conversation suggested that the version of the character in Marvel’s Avengers is older, wiser, and more hardened than the one fans have seen on the big screen. He’s not the young man going through a personal crisis that Boseman played. He’s sure of himself and the role he holds in Wakanda. War for Wakanda won’t test whether T’Challa is ready to be king, but rather, if he’s ready to work with the Avengers and the outside world.

Narcisse wanted to make sure fans understood that, in addition to all of Wakanda’s wonders, T’Challa himself is an impressive figure. This is a T’Challa who’s not only strong but smart, a king that Tony Stark will be jealous of.

“Let’s remember that, yes, [T’Challa’s sister] Shuri is the smartest person in Wakanda. But T’Challa is no slouch himself,” said Narcisse. “He’s a genius in his own right. We should explore his scientific curiosity as part of his personality. [And] let’s make sure that this isn’t going to be an Avengers-swoop-in-and-save-the-day kind of narrative.” Narcisse clarified that nobody on the Crystal Dynamics narrative team wanted to build a savior-type story for the Avengers, but he wanted to be sure that the expansion featured a Wakanda-first storyline.

Narcisse and the Crystal Dynamics team pulled in inspiration from Christopher Priest’s prolific comics run with the hero, which started in 1998 and featured a more seasoned Black Panther than Boseman’s. A Priest-inspired Black Panther should mean a darker T’Challa, and one that’s less immediately likable than the one players are familiar with from the MCU.

“It’s definitely an ultra-confident T’Challa. And I don’t want to use the word ‘arrogant,’” Judge smiled, “but he is very confident in his own abilities, the abilities of Wakanda to defend itself. And what his thoughts are about this collaborative effort [with the Avengers], if there even is a reason to allow it. […] This is a king who enjoys the throne.”

“We were already committed in a very deep way to make this version of T’Challa different,” said Narcisse. “That is just an ordinary kind of paradigm of superhero genre storytelling, right? Multiple versions of characters do coexist with each other. […] Superhero characters are primed to exist in different iterations simultaneously, whether you use the multiverse as a device or not.”

While Narcisse and Judge’s T’Challa may behave differently, he’s still the Black Panther. “Part of the ethos of the character that is the same is this notion that he’s kind of an anti-colonialist superhero,” said Narcisse. “The roots of his power and purpose come from keeping Wakanda sovereign and able to control its own destiny. So that is the same, but how he implements that philosophy and that sense of purpose is very different here.”

Judge and Narcisse’s job was difficult from the start — creating a distinct version of T’Challa in Boseman’s shadow is no small feat — and the comparisons will be almost impossible to avoid after Boseman’s passing last year. But the team at Crystal Dynamics, Judge, and Narcisse committed to something unique with Marvel’s Avengers’ first expansion.

Marvel’s Avengers’ War for Wakanda expansion is free for all players, and Crystal Dynamics will launch it on Aug. 17.