Within the first 15 minutes of the latest Call of Duty game, you’ve shot up a house in Amsterdam, you’ve sniped someone on a runway in Turkey – your shot accompanied by a slow motion bullet camera – you’ve chased a runaway plane in a jeep, controlled a remote control car with explosives strapped to it, blown up the plane’s landing gear, had a propellor miss your head by inches, and been knocked unconscious by burning debris. You’d be forgiven for thinking this is business as usual for the series. You’d be wrong.

Yes, it thinks Ronal Reagan was a good guy. It sees America and the UK as the “free world” – a term that comes up approximately 5,000,003 times during the story. “Every mission we go on is illegal,” says a random soldier, as if it’s cool to do war crimes. There’s a Russian guy called Dmitri who loves America. You travel around the globe shooting everyone – Vietnamese, Germans, Russians, Turkish people… It’s very much a Call of Duty game. But outside of its political grotesqueness, it’s a mechanical and narrative evolution.

There’s some player agency now – you actually make choices beyond whether to shoot an enemy in the head or in the nuts. And those choices affect the story! I know! It’s a Call of Duty campaign that I actually feel compelled to play through twice. I KNOW! 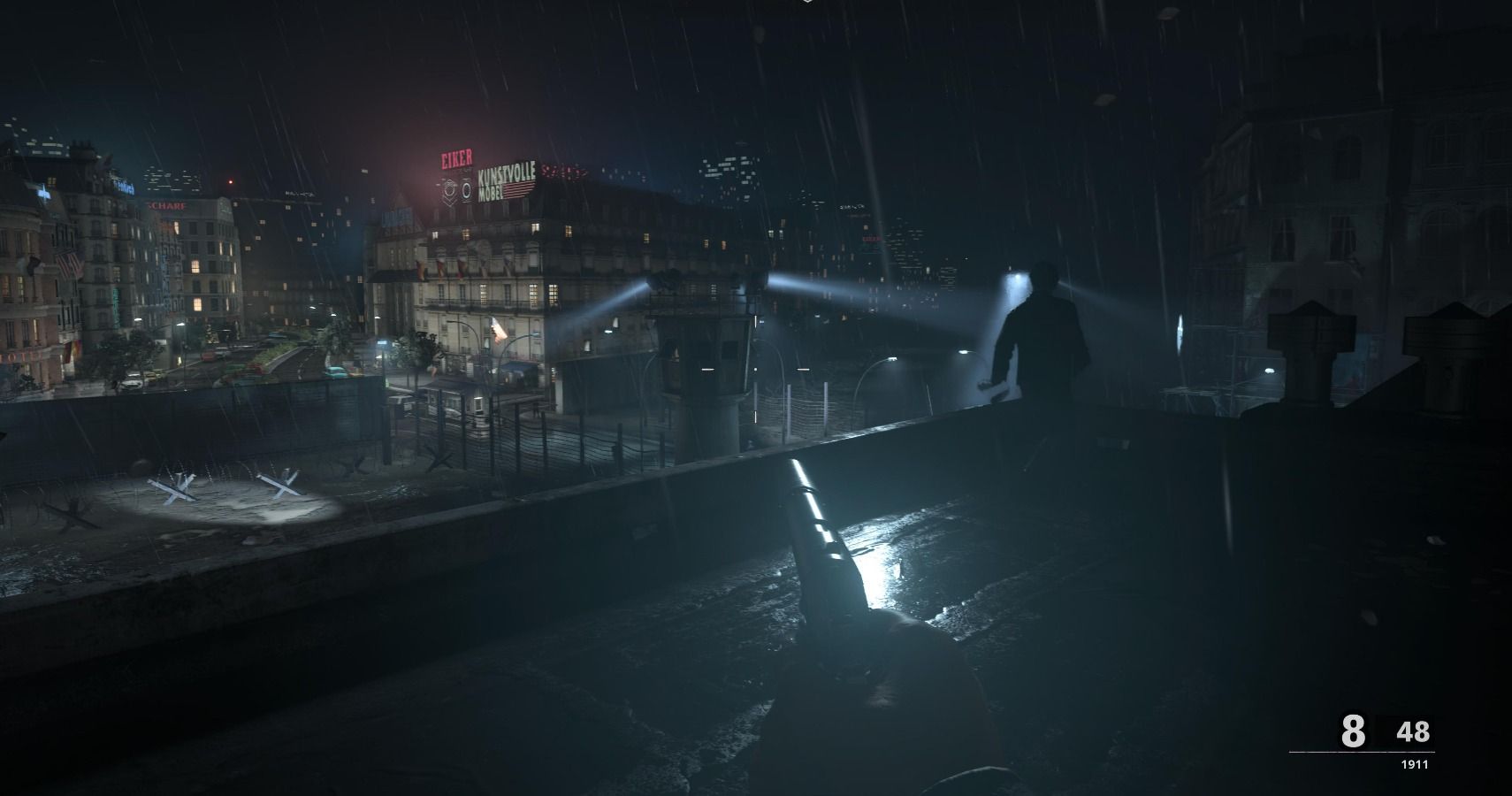 In those choices, there’s the simple stuff: kill or spare. You know, video game stuff. But there are also some choices later on that are a little more interesting. One level in particular sees you infiltrate the KGB headquarters, and you play half of it from the perspective of your inside man. This plays out a bit like a mini Hitman sandbox, with you creeping through vents, choking out guards, and tucking them into lockers. There are even multiple ways to achieve your objective.

It balances the in-your-face, balls-to-the-wall set-pieces you’d expect from COD with more subtle subterfuge masterfully. And it all culminates in a section that riffs on one of the unlikeliest of inspirations: The Stanley Parable. If you haven’t played that, it’s a brilliant indie game that you should play immediately where all your actions are commented on by a narrator, and you can go against that narrator to experience some surprising outcomes. There’s an entire level like this in Black Ops Cold War, and I think it will stay with me as long as series classics like All Ghillied Up. As Goldilocks would say, “The amount of headfuckery is just right.”

It has a bit of the old perspective shifting Call of Duty campaigns are famous for – there’s one piece of nostalgia bait where you head to Yamantua as Mason, accompanied by Woods – but you mostly play as you. Yes, you. The game opens with you filling out a personnel file – name, which clandestine outfit you’re from (I went MI5), and psychological profile, which is an icky way to give you in-game buffs – paranoid people aim faster, OK? Once that’s done, you’re assigned a codename – Bell – and that’s how characters refer to you. I will never get over seeing ‘Kirk “Bell” McKeand’ in pre-mission briefings. Where I come from, Bell is an insult. Fair play, Treyarch. Fair play. Your choice of agency also changes some of the interactions you have with teammates, with them referencing whether you’re former MI5, CIA, CBBC, etc. 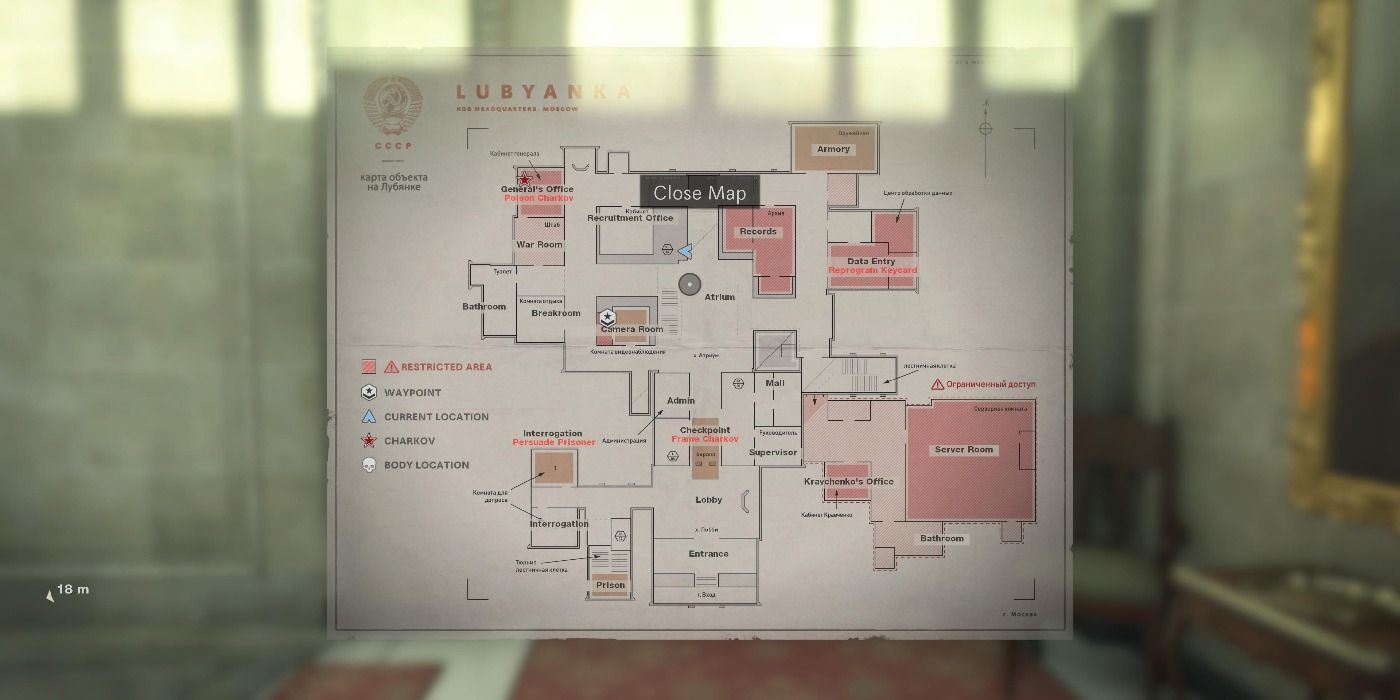 Between missions, you explore your safehouse and get to know teammates by digging into them with dialogue options. I particularly like how the game builds a sense of distrust, sowing seeds for later story beats. People occasionally walk off to have a private conversation and you can do your best to listen in. Sometimes other characters will comment on you being such a nosey little bitch. People interrupt conversations and go about their business regardless of what you’re doing. It helps that the facial capture is some of the best I’ve seen, too – the characters all emote naturally. It feels dynamic and makes the characters more interesting than the monotone door-kickers of series past.

While some of the missions stick to this more freeform vibe, there’s still some hangovers from old Call of Duty. One early mission sees you following a target into a bar. I tried to use the road crossing. You know, a bit of roleplay – a spy trying to blend in and act normal instead of jaywalking in front of jackbooted goons. “Return to mission area,” the game screams at me, a short countdown highlighting my impending doom if I don’t respond. Kirk “Bell” McKeand went MiA. He crossed the street just up the road and he was never seen again.

Then on the flip side, there’s stuff like optional objectives: taking photos of evidence in an enemy base, or silencing an informant who’s tied to a chair and being tortured in some basement. It really sells the spy games angle, which gives it a different flavour to the rest of the series. And even when things do kick off, there are flashes of that excessive showmanship that made the series so popular in the first place – like the Spetznaz base that houses a shooting range fashioned after an American town. You happen to walk in at the same time as a live fire training exercise kicks off, forcing you to pick out the human heads from the mannequins and marksman targets as the song “Hit Me With Your Best Shot” blares out from a speaker in a nearby arcade. 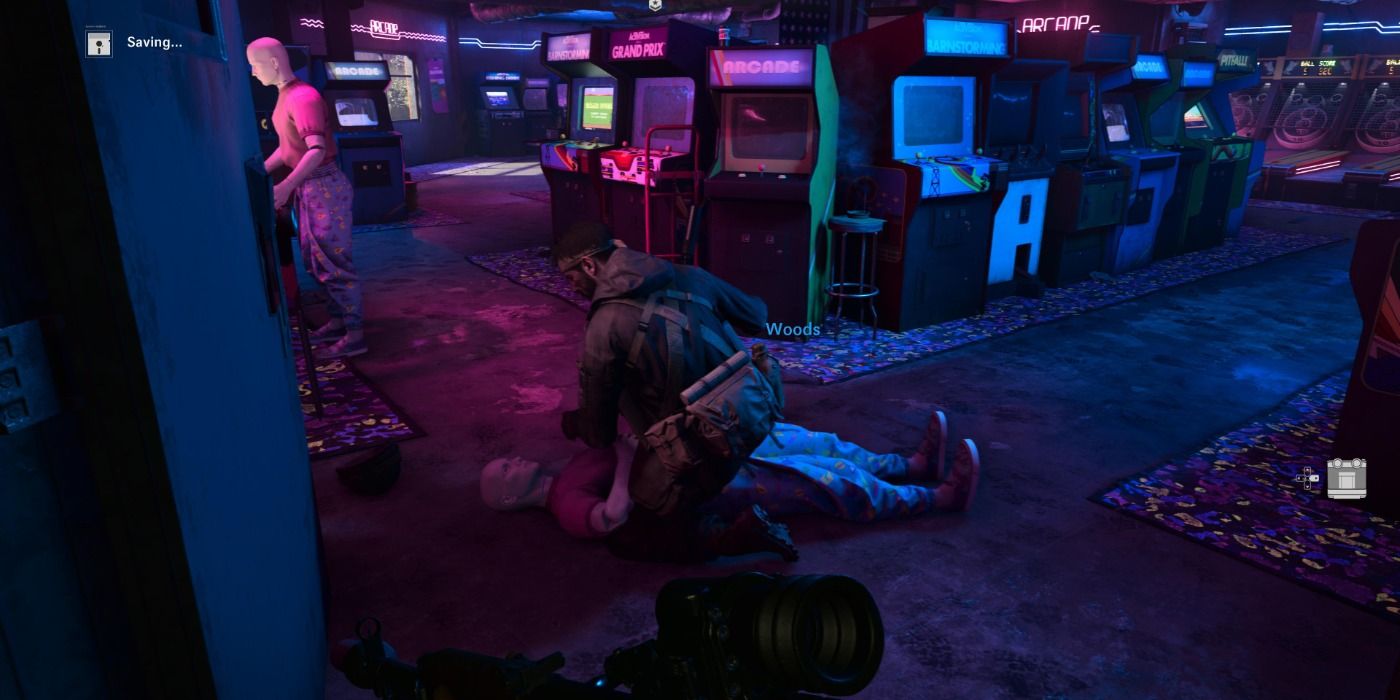 I haven’t even mentioned the optional side missions yet. Yes. There are two side missions, and they’re unlocked from near the start, but you’re encouraged to wait before you take them on. This is because you find intel in the main missions that provide clues for the side missions, and you have to piece those clues together to decrypt a floppy disc or identify targets. It actually makes you use your brain to figure these out – what’s the relevance of the numbers station, how can I narrow down the gender split of my targets? And best of all, you are free to mess them up, and that will affect the story too.

As always, the weapons feel incredible to fire – each one distinct and deadly, with accurate shots accompanied by that trademark thwup. There’s a bigger focus on silenced weapons and stealth, but the game allows you to mess up and blast your way through, too. A neat new addition lets you take enemies as human shields, and you can also stick a grenade in their hands and kick them into another group of dudes, which never disappoints (unless you’re bad at kicking dudes into dudes and you’re good at kicking dudes into yourself).

On top of this short, sweet, weirdly jingoistic, replayable campaign, there’s the bread and butter: the multiplayer. It’s Call of Duty multiplayer. You’ve played one of those before, haven’t you? It’s a good one. Remember when maps were more exciting than just three lanes of death? We’re back to that, with flanking routes and interesting angles to be murdered from. One of the main issues in the beta has also been fixed, which means people don’t constantly kill you while sliding around like a kid on a wedding reception dance floor. The only downsides are that there are only eight maps at launch, which feels a bit light – especially when you consider one of those multiplayer maps is just one of the larger mode maps shrunk down. 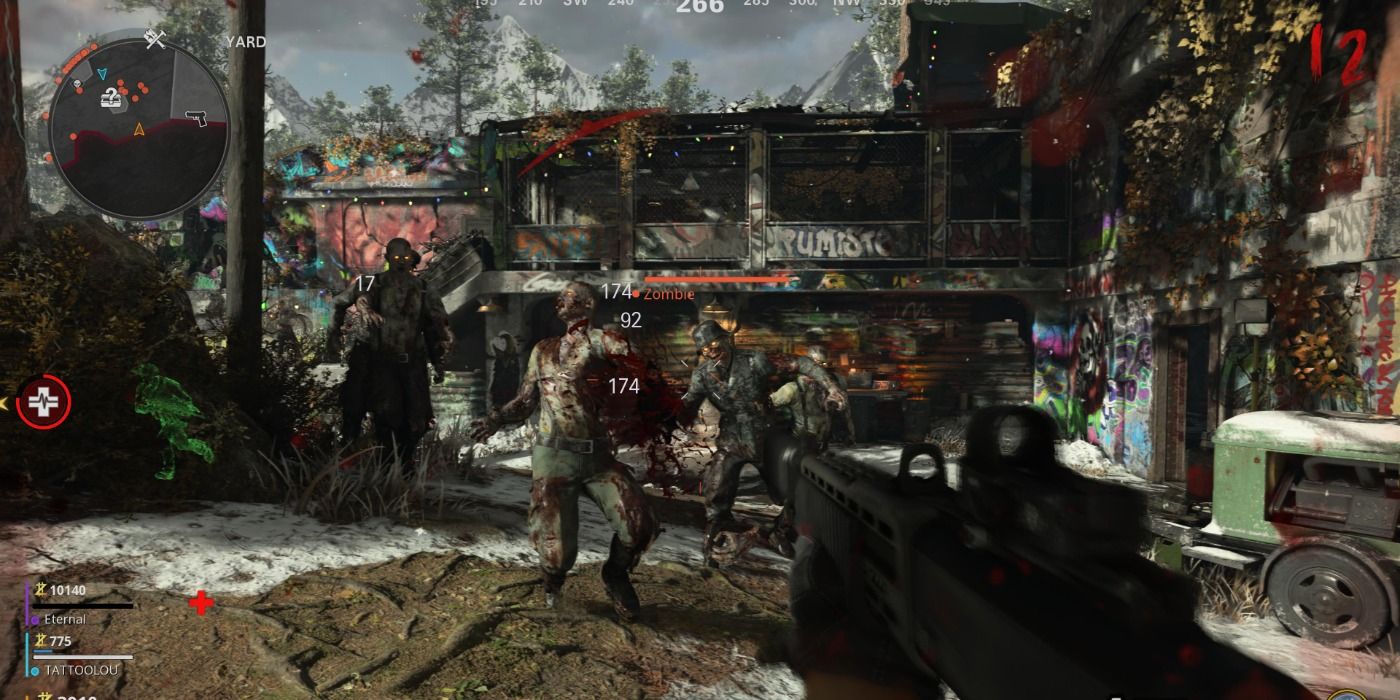 This goes for Zombies as well – there’s one (1) map. It’s good, but it’s one map. Previous games in the series have offered a lot more at launch in both Zombies and core multiplayer modes. I do like how Zombies feels to play here, though – there’s something really satisfying about the squishiness of the undead hordes this time around, and you can’t deny how those damage numbers tap into your idiot lizard brain. Yummy serotonin.

Mechanically, this is the Call of Duty game I’ve enjoyed the most since Modern Warfare 2, and the only game in the series where I’ve ever felt the need to finish the campaign more than once. It’s just a shame it’s a bit light on multiplayer maps, even if there’s no denying that, between the three modes, it’s still one of the best value video games you can buy. Enjoy, Bell.

Version tested: PS4 (via backwards compatibility on PS5). A review copy was provided by Activision. 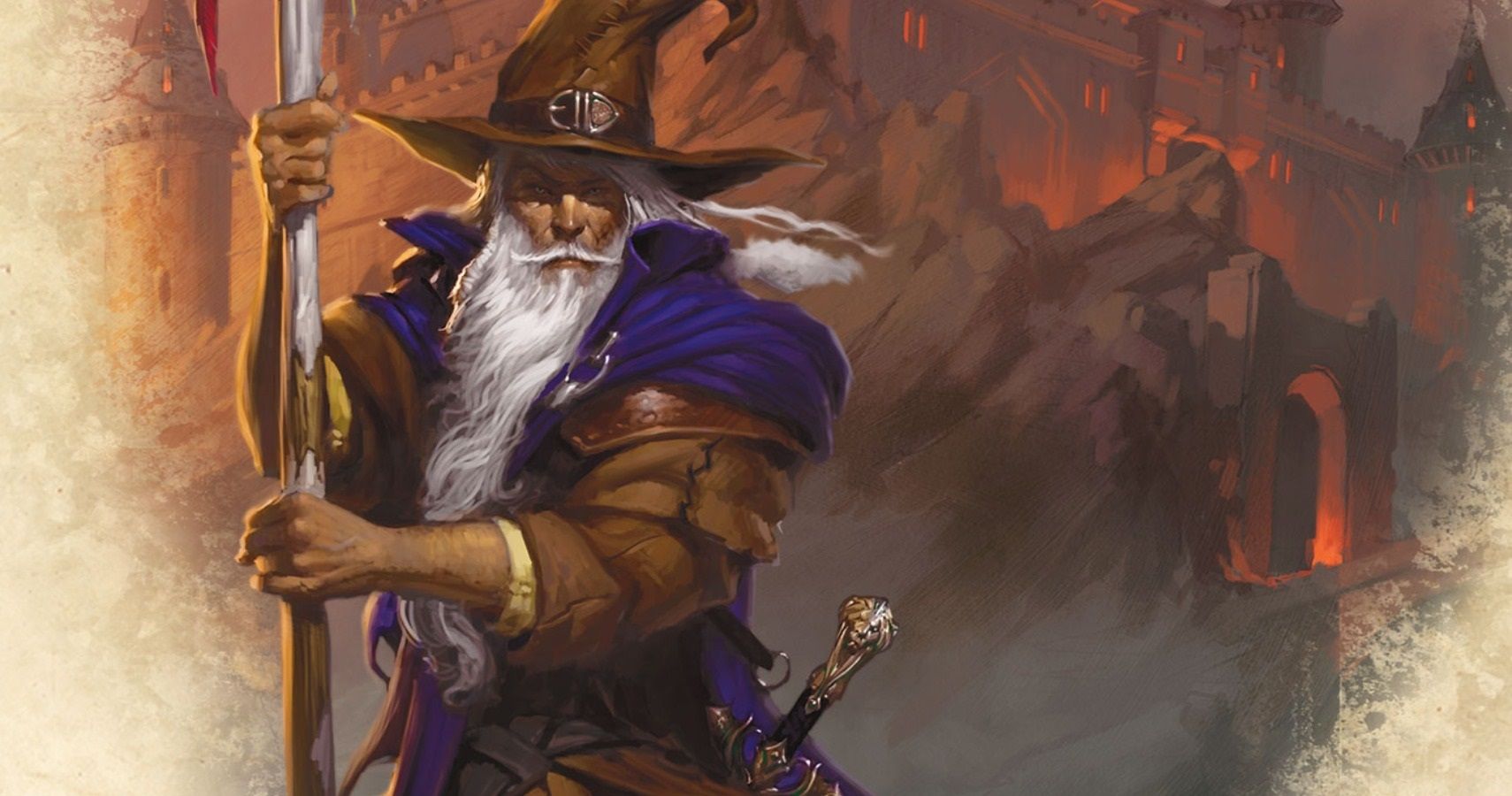