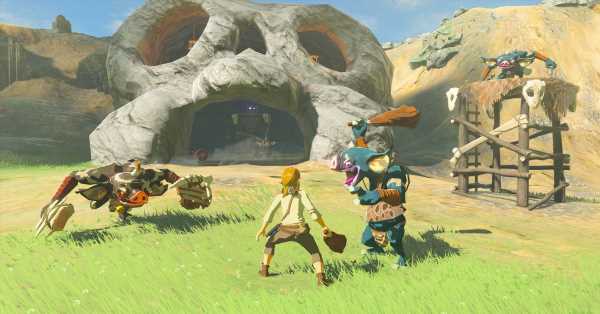 A new trailer for Nintendo’s sequel to The Legend of Zelda: Breath of the Wild awakened an ancient evil on Tuesday. I am, of course, referring to the somehow-still-ongoing discourse about breakable weapons in Breath of the Wild, one of the more contentious design decisions in the 2017 open-world Zelda game.

Weapon durability may very well be back in the sequel to Breath of the Wild (though, Nintendo hasn’t confirmed that) ushering in a new wave of conflict over whether weapon durability is a good thing, a bad thing, or a dark and miserable blight upon mankind.

I lobbed the Breath of the Wild breakable-weapon-discourse grenade into Polygon’s Slack chat recently, then walked away while my colleagues tore each other apart. In the wake of the chaos, I asked them to politely debate the merits of stuff that breaks in Hyrule, which you can read in the comments below. Your best argument for or against the worthiness of weapon degradation is welcome in the comments.

I know, heresy. I love Breath of the Wild, particularly its then-transgressive approach to open-world games. Gone were the countless meaningless subquests and busy work, and in its place stood genuine exploration. Nintendo stripped away so much of the gamey-ness of open world games. That’s why weapon durability felt so incompatible with my method for enjoying the world. Worrying about busting my weapons prevented me from experimenting with them. It applied my worst habits of item hoarding in more rigid RPGs to an open-world begging me to take risks and be creative with my resources.

I had nearly made it to the game’s conclusion when I gave up out of frustration. Look, I’m happy to make a compromise. Y’all can keep your weapon durability but please let me surf on my shield without being punished for experiencing joy. Deal? — Chris Plante

The Legend of Zelda: Breath of the Wild is easily the most pleasant post-apocalypse I’ve ever experienced in fiction. It’s downright lovely to trek through the ruins of a terrible, kingdom-leveling war to solve puzzles and forage for Korok seeds. I love going back to this world — in fact, I might do it again tonight. The big irony of course, is the horror radiating out of the castle in the center of the map, almost always in sight.

Despite that constant monument to disaster, Breath of the Wild is a game with very little friction. Its biggest limitation is Link’s stamina meter, which initially determines how much you can climb — something that you can render moot with food or upgrades, to the point that it matters less the more you play. That leaves two other sources of friction: weather, and weapons. The former is a systemic marvel that allows for all manner of cool interactions at the cost of a couple minor inconveniences, and the latter is a controversial limitation that has frustrated masses of people who understand why it exists on paper but often counter with a simple, compelling rebuttal: It sucks.

Zelda Breath of the Wild guide: How to make your weapons last longer

I will give them this much: They’re right! It does suck. But you know what also sucks? Hyrule, man. There is a story being told here: that you are trekking your way through a somber place, that the calamity — always in sight — has irrevocably changed this world and made it a place reclaimed by greenery and wildlife, a world that exists in opposition to you. People like you, who chop down trees and build houses and cook steaks over little campfires? Maybe things shouldn’t be so easy for them. Maybe the countless weapons you find and shatter — remnants of a terrible war you only see fragments of — are a reminder of an old way of living that should be replaced with something new. Feel frustration when a weapon you like breaks? Maybe that’s good. Maybe it should be difficult to exert your will on the world around you. Maybe there are some things bigger than you. If the wild does breathe, as the game’s title suggests, perhaps it should also be respected. — Joshua Rivera

Weapon durability stymies the late game, but I still support it

Breath of the Wild broke the tired Legend of Zelda formula that guides players by the nose through sequenced areas and slowly layers on the difficulty. Previously, each puzzle had one key item to solve it, each dungeon or boss fight relied on one tactic — arrows, hookshots, bombs, whatever. Breath of the Wild smashed the mainstay idea of each problem having a specific solution, and I’d argue weapon durability is an extension of that. There are so many ways to fight whatever comes my way, but rarely could I depend on a single one.

Breath of the Wild 2’s best fan theories … so far

I’ve played too many Zelda titles, and I was ready for a change. The fragility of early simple weapons made the game’s early hours thrilling. It’s fun to be on the ropes against Zelda enemies I wouldn’t give a second thought to. A Bokoblin gang could actually prove to be a challenge if my sword and my backup club (and my other backup club) all crumbled to dust in my hands. And it’s not the same type of challenge of the rhythmic combat of a Dark Souls boss. It’s chaos! And the Zelda franchise avoids chaos, especially the 3D iterations.

But the weapon durability actually grates when I spend money and resources — sometimes a lot of money and resources — on some Ancient weapons. I get that a scavenged shield and longsword are flimsy and have taken hits from their previous owners, but I paid a man with hard-fought Guardian bits and he turned them into a new weapon, not just a “new to Link” weapon. As a result, I’ll hoard anything I spent a lot of time on in my weirdly unfurnished home, thus ensuring I’ll never use it to smash up more Guardians. So yes, keep the weapon durability, but give me a forge or smithy or easier ways to repair items of greater value. — Chelsea Stark

To those who are anti-weapon degradation, here’s what I offer to you: Untether yourself from your earthly desires and start playing the game like a true scoundrel. Just pick up random stuff in the environment and throw it at enemies. There’s nothing quite like the feeling of knocking over a powerful Moblin just to steal their weapon, then throw it right back at their face and watch it break. (I always try to keep a slot or two open just for this.) Sure, a sword shattering mid-flurry rush is not ideal, but intentionally using and destroying as many weapons as you can was a fun way to play.

Breath of the Wild’s Guardian will be playable in Hyrule Warriors, which rules

Do I wish I could always keep a complete set of every weapon for vanity reasons? Sure. It would be nice not to have to pair a honking Lynel shield and a glowing guardian sword with my pretty Hyrule military guard outfit. But life is messy, and so are the ways I customize Link’s armor.

That being said, with such a weighty and hotly contested question, comes nuance. I think shields specifically are an issue when it comes to weapon degradation. I remember the first time I went to explore Hyrule field in earnest. I was doing my best to deflect the Guardian’s lasers but I lost all my shields just because I have poor timing. It only took a shot or two from them to destroy my best shields. I just didn’t have enough slots to hoard disposable shields. I felt like a defenseless baby on the outskirts of Hyrule’s most dangerous region. To this end — a shield that replenished on a timer would have gone a long way. Still, the experience drove home this idea that if I wanted to face such grand monsters and challenges, I had to be ready to give something up. — Ana Diaz

I came late to the Zelda franchise, but fell deeply in love with it during my college years. So when Breath of the Wild rolled around, I wasn’t sick of the formula Nintendo set in place 35 years ago. I enjoyed my first playthrough of Breath of the Wild but ultimately came away frustrated. The source of my frustration was, like many players, the weapon degradation system.

I love the way Breath of the Wild forces you to gain personal proficiency with every weapon type. You’ll never know when you’re in a serious Test of Strength Shrine and run out of everything except for a spear. But there are certain weapons that I never want to use, out of fear that I’ll break them, even if they’re fun and powerful. What about the spear I get from the Zora? Or the claymore from the Gorons? Those weapons are meaningful to me. So in my playthrough, I did what any logical player would do: I bought a house and hung all my reward weapons on the walls.

I recently replayed Breath of the Wild and ended up loving it for what it is. But even going in, knowing what I was getting myself into, I ran into new ways to get frustrated by my weapons shattering mid-combat. I abandoned my quest to start the Master Sword DLC because I didn’t feel like spending hours farming weapons after a single Guardian fight cleared out my entire arsenal. I reloaded my save, killed Ganon, and started playing something else. I would love to see all that Breath of the Wild has to offer, but grinding out powerful weapons just for them to break a few minutes later isn’t my idea of fun. — Ryan Gilliam