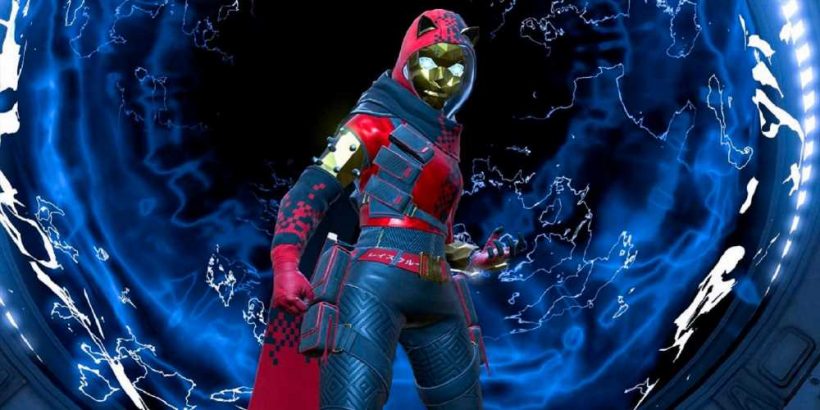 There are some moments that you know as you’re watching them, will go down in esports history. In the Apex Legends Global Series, TSM’s Eric ‘Snip3down’ Wrona respawning in the final circle and battling it out with just his axe and a dream instantly springs to mind, but this weekend Gambit’s Konstantin 'Hardecki' Kozlov might have just spawned another such memorable moment across the pond.

Anyone who regularly watches EMEA Apex Legends esports will know the names Gambit and Hardecki. Gambit Esports is consistently challenging for tournament titles and has won over $125,000 in earnings to date, and Hardecki is well known to be one of the most mechanically talented players in the game – Europe or otherwise. So you might not be surprised to hear that one of his Wraith clips is going viral – but just wait until you see it.

We’ll link the clip below, but first some context: the final circle was closing in and Hardecki’s teammates had long since perished. He had escaped using Wraith’s tactical ability, and made it into the zone by playing a strategic, stealthy game. With six teams remaining in the game he took out two members of Outplayed, despite being solo and risking giving away his position. As the final circle started closing in, Hardecki was in third position with two full squads between him and victory. Second place was on the cards given his skill and positioning, but a 1v6 was surely an impossibility – or so we all thought.

As you can clearly see, a 1v6 is exactly what happened. But how? We know Hardecki is good, but no player should be able to win from this position, sandwiched between two full squads. So we’re going to break it down and explain exactly how it happened.

We’re speeding past Hardecki’s route to third place – although it was an impressive rat strat, we see this quite often. But look at his positioning in the final three:

He’s the one in the centre, with three members of UNDERRATED to the north east, on the other side of the hill. Les cités de France is positioned in the west, using the Mobile Respawn Beacon as cover. LCDF’s JokeeV2 is the player in the north, flanking to get angles on UND.

At this point in Hardecki’s VOD, he is laughing with his teammates. It’s unclear whether this is a “what a ridiculous position we’re in” nervous chuckle or an “I’m going to shit on these fools” maniacal cackle, but he knows the odds. However, whenever the southernmost player for UND, Jake ‘jaazzaz’ Lock, peeks round the corner to try to take the Gambit player out, Hardecki shreds him with perfect shots, cracking his armour multiple times.

Despite one battle between the two where they traded armour – causing Hardecki to use his Wraith tactical to disappear for a few seconds, before returning to his original position – Hardecki fights off jaazzaz’s pushes and forces him back to his squadmates to rethink. Even though he’s left on only 50HP, Hardecki survives and jaazzaz retreats.

Meanwhile, LCDF pushes to the north, likely due to Jokee’s angle. They knew that a rat was in the south – Julien ‘Lerabinou’ Verrier had shot at Hardecki earlier in the fight. Their logic was likely that taking on the 3v3 would leave them stronger to finish one remaining player than exposing themself trying to kill the solo and getting caught out by the full team. This decision flips the game and now leaves UND sandwiched between LCDF and the rat. Hardecki, however, is laying low. He fully heals and bides his time.

As you can see, Hardecki is now a lot safer. UND is focused on defending the push from the north, and LCDF – due to the fact all three members have flanked and are pushing – don’t have any angles on the Gambit player.

Hardecki plays this very cool, knowing that his best bet of achieving a better placement is by third-partying the current fight. He doesn’t peek extraneously or waste his limited resources – he full-healed earlier using Shield Cells as he had no more Batteries.

Les cités de France tries another angle, and Corentin ‘laggeRR’ Sadoun pushes through the centre of the zone with Lerabinou in tow. LaggeRR’s Gibraltar Ultimate forces UND to use its Shield Dome moments after he used his own. However, LCDF can’t fully make the most of the push because Lerabinou has a slither of HP remaining after trading with Jason ‘HTPHarold’ Hebblewhite. Lerabinou has to use his time in the bubble to pop a Shield Battery rather than taking the front foot in the fight, so despite Jokee’s angle and accurate shooting, the team can’t make the most of its advantage. Nothing points to this misplay more clearly than Lerabinou’s comms to his teammates at the time, which sound something like, “Putain! Putain! Putain!” Don’t Google Translate that one, kids.

LaggeRR’s mistimed push was exactly what Hardecki needed to get the win. The fight between LCDF and UND went as expected: both teams took serious damage, and one came out just on top. UNDDERRATED pushed Jokee’s northern angle as he was isolated from his team, taking him out of the match but sustaining fatal damage from his teammates in return.

Hardecki had made the top two, but it wasn’t enough. Les cités de France was left with two players; Lerabinou had full-strength shields but next-to-no health, and laggeRR had 75 points of shields and 100 of health. Using the element of surprise and millisecond-perfect timing, Hardecki jumps onto the hill the moment that UNDERRATED is eliminated, allowing the remaining members of LCDF no chance to breathe, let alone heal.

After that, Hardecki hits his Mastiff shots and you know the rest. 44 and 66 damage in two pumps takes care of an unsuspecting Lerabinou, but gives laggeRR a chance to turn and shoot. Hardecki takes a little shield damage, but hits the Gibraltar for 72 damage, twice. A spray from his Flatline finishes the job as laggeRR runs for cover.

Hardecki and his Gambit Esports teammates scream and clap, and in that moment their excitement was matched by esports fans across the world. This is a moment that the team will replay in their heads for years to come, and one that will undoubtedly be shown multiple times on the Split 1 Playoffs broadcast as analysts marvel at Hardecki’s accuracy and timing. Mark ‘Onset’ Hatcher described it in the moment as, “one of the craziest plays we’ve ever seen,” and it’s hard to argue with him.

While there was a healthy slice of good fortune and a couple of misplays that helped Hardecki to the win, he knew what he needed to do and played the game out perfectly. Jumping into the fight a few seconds earlier would have meant taking unnecessary damage for instance, and any later would have let LCDF reset, find cover, and possibly heal up. Let’s not forget that this is the man who hit eight Kraber shots in a row in this very match. Is Hardecki the best player in the EMEA region? Maybe. Is this the best play the region has ever seen? Definitely.