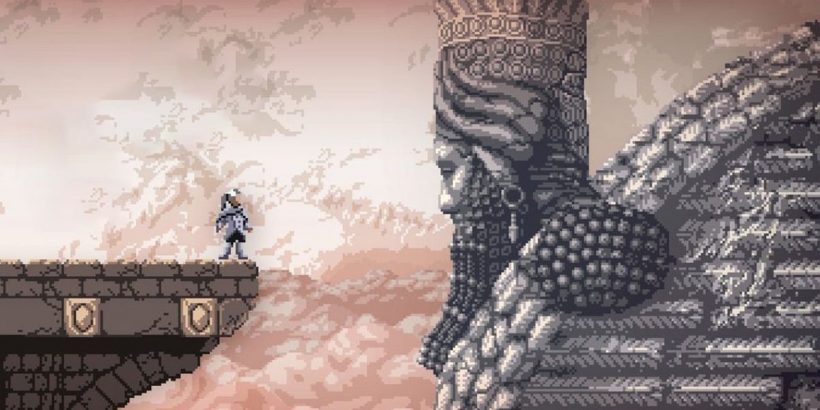 Axiom Verge 2 is a Metroidvania game for people who hate the term “Metroidvania.” Thomas Happ Games’ second outing has a purist’s view of the genre built by Metroid that feels like a refreshing change of pace in a sea of imitators. More importantly, while its meticulously paced exploration and upgrade loops are a little too close to its inspiration at times, it’s the way Axiom Verge 2 digs into the isolation at the heart of the Metroid series that makes it stand out.

Axiom Verge 2 strands you on the cold, mysterious world of Kiengir and cuts right to the chase. You don’t know what’s going on or what anyone else is doing here, but you’re bent on going back to Earth. So you grab a pickax and start exploring a new alien landscape with the help of the Arms, a group of superpowered entities that imbue their wielders with powerful abilities.

Most of what we call Metroidvania games tend to borrow more from Castlevania’s RPG grind and economy-based progression than Metroid’s simpler approach to power-ups. In Axiom Verge 2, enemies don’t drop currency for you to spend on upgrades. In other words, enemies aren’t resources to mine — they’re obstacles in the purest sense, and if you can avoid fighting them altogether, even better.

This makes the world of Axiom Verge 2 one you explore, but don’t necessarily conquer. Sure, by the end of the game I had upgraded my health plenty, but enemies scaled to match. Trekking back and forth across this world always felt some degree of oppressive, because even when I returned to previous areas as a more powerful threat, enemies could still quickly cut me down if I wasn’t alert.

Every new area is appropriately tough to navigate at first, but that only makes finding new upgrades and collectibles all the more captivating. What’s more, the game is quick to dole out upgrades early on. I waded through an early underwater section for 10 or 15 minutes before I got an ability that made moving underwater a breeze. It’s an obvious trick, dangling progress in front of players like this, but the speed with which I evolved made it hard to care. It also helps that the map features in-game coordinates, which makes tracking down specific upgrades easier.

Some of these upgrades are fun to experiment with, too. One is a drone you transplant your consciousness into with its own set of upgrades that help you traverse Kiengir. Later on, you get the ability to hack locked doors, but you can also hack any kind of robotic enemy to disable their guns or make them your allies.

But while Axiom Verge 2 cleverly splices and repurposes the bits and pieces of Metroid, its purist dedication can also make it feel too familiar at times. I explored as much as I could early on, gathering new weapons and skill points that I could spend on new abilities, more health, or increased damage. Later on, though, seeing a new mysterious object, poking at it, then immediately dubbing it a “come back later” signpost got old — I felt satisfied with the tools I already had. I’ve been through this loop dozens of times, and Axiom Verge 2 didn’t do enough to compel me to complete it.

But Axiom Verge 2 doesn’t let you forget that there’s more to Metroid than backtracking. One of the most enduring things about that series is how isolating it can feel. And that’s where Axiom Verge 2 finds its most powerful moments. After acquiring the aforementioned drone, I learned there’s a second world I can explore called the Breach. It’s uninhabitable by humans, but my little robot friend had no issue exploring it. At one point, though, I got stuck in the Breach, cut off from most of my bodily upgrades and vulnerable as a result.

In a game like this, reverting that sense of progression feels harrowing; I had to navigate old areas in a much weaker state. I wasn’t entirely sure I’d ever return to my old body, which is a great twist in a genre all about building a slow, upward ramp in power, and it recaptured the feeling of tension and loneliness you get in the early sections of Metroid games.

Most of Axiom Verge 2’s story, told through short dialogue exchanges and snippets of text, is obsessed with both the weight of history and the futility of looking back — a weird thread for a game that is so in love with the past, and so persistent about having you return to places you’ve already been. Many of the key terms and characters are lifted from Sumarian history and Mesopotamian mythology, which set me up to think about the way it looks at history in eons, not years.

The backdrop, a war between otherworldly races taking place across a vast stretch of time, includes Gods who are as withholding as they are benevolent, followers who sacrifice their humanity to save their people, and lots of questions about the nature of consciousness. The soundtrack, full of brooding synths and muscly ’80s guitar, resonates with longing chants that make the world just a bit more lonely.

The actual plot quickly gets confusing with jargon, proper nouns, and sci-fi concepts that are hard to parse outside of basic story beats. But the details aren’t as important as how estranged they made me feel. Axiom Verge 2 regularly had me thinking in deep time, about how little my fleshy body mattered in the grand scale of the universe. It’s a more existential kind of isolation, but it felt in line with the way Metroid loves to bottle you up in your own head.

But even as the story continued to hammer home the point that looking back can be a curse, its last couple of hours are very specific nostalgia trips that undercut that notion. Both mechanically and narratively, the ending was disappointing for how predictable it all felt. That Axiom Verge 2 so deftly parallels Metroid’s isolation and difficulty is its greatest strength, and it sets it apart in the Metroidvania genre. But that same rigid adherence is also a good reminder of why the wider genre has had to innovate. As alluring as nostalgia can be, at a certain point, it’s time to move forward.

Axiom Verge 2 was released Aug. 11 on Nintendo Switch, PlayStation 4, and Windows PC. The game was reviewed on PlayStation 4 with a pre-release download code provided by Thomas Happ Games. Vox Media has affiliate partnerships. These do not influence editorial content, though Vox Media may earn commissions for products purchased via affiliate links. You can find additional information about Polygon’s ethics policy here.