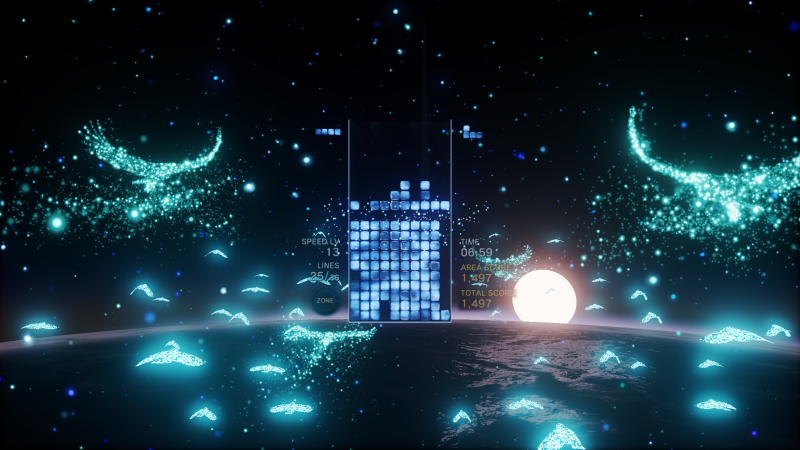 Tetris Effect wowed us with its incredible visuals and fantastic soundtrack when it released on PS4 last year. This week it released on PC, meaning more folks get to enjoy the game with some additional bells and whistles added on. However, they’ll have to download a rather interesting piece of software if they want to take the game in in all its VR glory.

The official FAQ on Tetris Effect’s Epic Games Store page mentions that in order to launch the game on Valve’s HTC Vive headsets, players must select the “Launch in SteamVR” option, and the “Launch in Oculus VR” option for Oculus headsets. It’s a little weird you have to launch software made by Epic’s competitor in the PC Space, Valve, in order to play the game. That said, you don’t need to run the actual Steam client in order to run it; just SteamVR, which is technically a separate piece of a software.

However, it seems you’ll have to run SteamVR even if you’re on Oculus, as well. In a statement to Dark Side of Gaming, Epic says “Tetris Effect VR does require SteamVR, both on HTC Vive and Oculus.” That’s a little strange and technically contradicts the FAQ, which says the running the game through an Oculus headset should only require OculusVR.

This little nuance shouldn’t be too troublesome to most PC users who already have Steam, though Oculus users (and anyone who might have bought a VR headset for Tetris Effect) might rightfully be bothered by having to download another piece of software in order to run the game.

Still, it’s an interesting little side-effect of Epic’s place in the PC market; having to run a competitor’s software is one of the concessions they may have to make right now, since they don’t yet have any VR component of their own. This could be what Epic founder Tim Sweeney meant when he said that, despite the store not having a VR interface, “games released on the store can support VR if they [developers] choose.”

[Source: Dark Side of Gaming via Eurogamer]