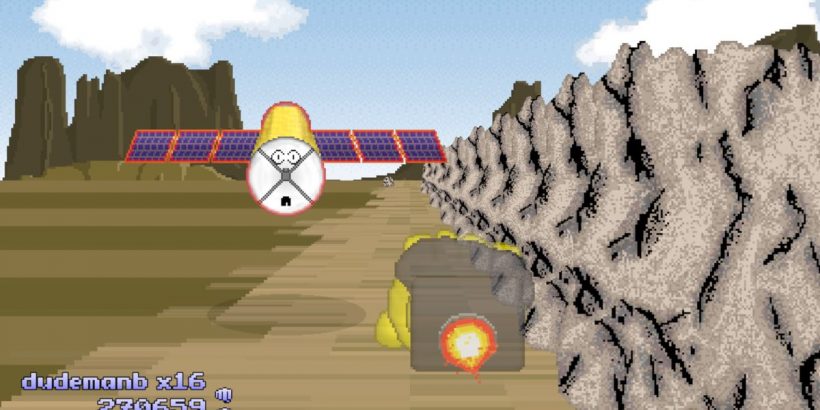 After six and a half years of development, at long last “idiot gaming” innovator Chris Bulch has launched his doofus opus: Rocket Punch, for the practically obsolete configuration of PlayStation Camera-enabled PS4s.

“I have no idea how I managed to sneak this past [the PlayStation Store],” said Bulch, the founder (and lone employee) of Shame, Intercontinental. “Like, someone wasn’t looking at it properly on the day it was submitted, or something. I guess it was close to Christmas or something.”

Rocket Punch went live on PlayStation 4 on Tuesday. In the game, players steer a disembodied fist, afterburner glowing, through several dystopic landscapes, punching anything with a face (whales, space stations, zombie cowboys, etc.) and avoiding anything that does not have one.

Users play Rocket Punch not with the DualShock 4’s sticks or D-pad, but with the light bar, read by the PlayStation Camera. Bulch’s not-so-ulterior motive: make people look like the dolts holding gamepads as they fake-play games for stock photography collections. You know the type:

Partway through Rocket Punch, players will be told that they’re being observed, and then after they complete the main game (about a dozen stages of punching enemies) they’ll be shown five-second clips of what they looked like at various points through the game.

In my case, Rocket Punch captured me like this:

(Yes, that’s what you think it is.)
Image: Shame, Intercontinental via Polygon

“The light bar is this, like, kind of fascinating thing to me,” Bulch said, “that I think a lot of people just got pissed off at because it drains your batteries. It was one of those things that just seemed so intuitive to me when I looked at it, but I guess it’s very difficult to pick up on after, like, a lifetime of seeing motion controls.”

I’ll admit to having some difficulty with Rocket Punch, mostly because I was instinctively rotating and tilting the DualShock 4 like I was using SixAxis controls. You really do have to move the whole unit side-to-side, preferably with both hands. It’s how the game makes you look like a dolt, after all.

Bulch conceived Rocket Punch in 2014, shortly after he developed the Flash-game satire Americlap. A developer who tinkers with alternative control schemes, Bulch also calls his medium “idiot gaming,” in that players end up looking and sounding like imbeciles as they play. (His Twitter handle, “CaptKuso,” reflects this; “Kuso” is otaku-speak for “shit game.”)

Americlap, for example, requires players to hold a U.S. flag aloft by clapping into their computer’s microphone. And Glue Stick, for mobile devices, keeps their fingers rooted to a spot on the surface of their phone, offering paltry rewards for doing so.

But since 2014, a lot has happened to keep Bulch away from delivering on his grand vision. He’s gotten married for starters, and the new couple moved to Japan sometime thereafter. Only in the past two years, Bulch says, has he gotten serious about finishing his game. If nothing else, it would justify the money he spent buying a PlayStation 4 development kit shortly after finishing Americlap.

“Honestly, I think the only reason I finished it, and had the drive to do it, was because, like an idiot, seven years ago I told you about it and you wrote about it,” Bulch told me on Wednesday. “Then I felt obligated to finish it. Because I’m a man of your word.”

Punch anything with a face; ask why it has a face later
Image: Shame, Intercontinental via Polygon

The flying fist of fury is only part of Rocket Punch’s gameplay. The latter half involves a surreal trip through all sorts of alternate control schemes, where it’s revealed that, in a Portal–esque twist, the player is actually a game tester for Shame, Intercontinental. These additional modes are hinted at in the game’s Trophy list, which includes achievements for “Pet the space dog,” “Golf mode,” “Rhythm mode,” and “Legally Distinct Game Mode,” for something called “Flappy Fist.”

“Most of the development time was just coming up with these new control schemes,” Bulch said. “And the last couple of years has really just been tying that together in a way that makes sense, in a way that functions properly.”

Rocket Punch is $4.99, (“God, I don’t feel great charging for any of my games,” Bulch groaned. “But it’s just part of releasing on console, unfortunately.”) and it’s available now. Despite the fact it took six and a half agonizing years to bring to term, Bulch says he feels “unbridled joy,” at its completion, “which I didn’t think I would ever feel for this game.”

The biggest lesson he’s learned: “If you take six and a half years to do your game, a K-pop band will steal the title,” Bulch said, “and then with it all of your SEO flow.”