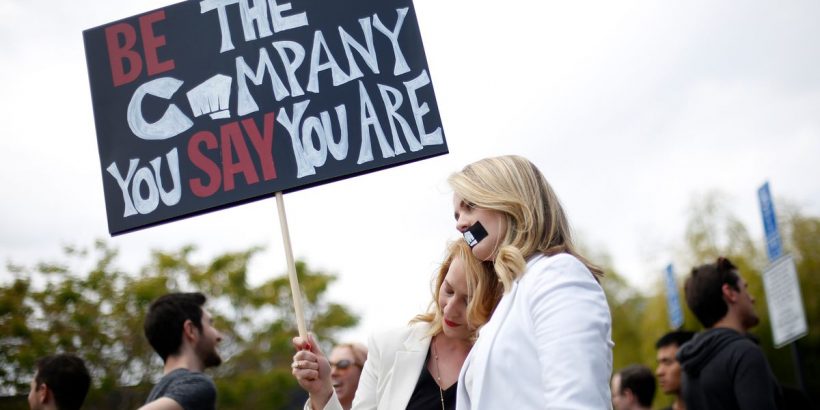 Riot Games, the video games developer behind League of Legends, will pay $100 million to settle a class-action gender-discrimination lawsuit, the company announced Monday. The settlement is 10 times what the company originally agreed to pay.

Riot was originally ordered in 2019 to pay $10 million to the thousands of class members when California’s Department of Fair Employment and Housing (DFEH) stepped in, alongside the Division of Labor Standards Enforcement (DLSE), to oppose the settlement. The two state agencies instead argued Riot should pay up to $400 million for its labor violations.

The original lawsuit was filed in 2018 by former Riot employees Melanie McCracken and Jes Negrón, following a Kotaku report that detailed widespread sexism and gender-based discrimination within the company.

The majority of the settlement — $80 million — will go to women who either currently or formerly worked for Riot since November 2014. At least 2,365 are eligible to receive a part of the settlement, DFEH said, including contracted workers. The rest of the settlement, $20 million, will be paid as attorney fees and “miscellaneous expenses,” Riot said.

“In the battle for equality, announcing one’s truth is the singularity that changes everything,” former Riot artist Gabriela Downie said. “It takes bravery to come forward with a loud message about oppression and pain, but the right people hear it and will help. I’m grateful to the other Riot women who stood up alongside me and to all the Rioters who supported our efforts to achieve equal pay and fair treatment for women.”

Alongside the $100 million payout, Riot agreed to “substantial systemic changes,” which include a “gender equity analysis,” performed by an independent expert, of pay, promotions, and assignments for three years. Riot also agreed to create a $6 million fund for each of those three years, for a total of $18 million, to fund diversity initiatives and to adjust pay for equity.

“I am so glad we achieved this first step toward justice for the women of Riot Games,” Negrón said. “I hope this case serves as an example for other studios and an inspiration for women in the industry at large. Women in gaming do not have to suffer inequity and harassment in silence — change is possible.”

A Riot representative said in news release that it hopes to “lead by example in bringing more accountability and equality to the games industry.” Here is Riot’s full statement:

Three years ago, Riot was at the heart of what became a reckoning in our industry. We had to face the fact that despite our best intentions, we hadn’t always lived up to our values. As a company we stood at a crossroads; we could deny the shortcomings of our culture, or we could apologize, correct course, and build a better Riot. We chose the latter. We’re incredibly grateful to every Rioter who has worked to create a culture where inclusivity is the norm, where we’re deeply committed to fairness and equality, and where embracing diversity fuels creativity and innovation.

While we’re proud of how far we’ve come since 2018, we must also take responsibility for the past. We hope that this settlement properly acknowledges those who had negative experiences at Riot and demonstrates our desire to lead by example in bringing more accountability and equality to the games industry.

A second gender discrimination and wrongful termination lawsuit was filed in 2021 by former Riot executive assistant Sharon O’Donnell. In it, O’Donnell alleged that CEO Nicolo Laurent had her fired after she reported him to human resources. This case is ongoing, though Riot disputes the wrongful termination allegation, and has since cleared Laurent of any wrongdoing.

The video games industry is still in the midst of its “reckoning” with sexism and workplace misconduct. Large studios like Activision Blizzard, Ubisoft, and Sony Interactive Entertainment have all been accused of gender- and/or race-based discrimination. Activision Blizzard, for its part, faced multiple lawsuits following its own DFEH investigation. But it’s not just the industry’s biggest players; smaller studios, like Gone Home developer Fullbright and Season developer Scavengers Studio, have also faced similar accusations.

In the midst of these allegations, worker solidarity has seen an increase, in the form of walkouts, strikes, unionization, and other actions.

“To the rest of our industry, keep speaking up and keep pushing for accountability,” Riot employee Gina Cruz Rivera said via a statement through lawyers. “Your voice matters and together we can make this industry safer and more inclusive for everyone.”